In this week's blog, exhibition co-curator and Costume Society member Jane Malthus takes us behind the scenes of the Fashion FWD: Disruption through design exhibition at Otago Museum, Dunedin, New Zealand.

Fashion FWD: Disruption through design ran March 21 - October 17, 2021 as a physical exhibition at Otago Museum, Dunedin, New Zealand, as well as a paper catalogue and is currently a virtual exhibition experience. The exhibition celebrates the enormous creativity and design talent of emerging designers from all over the world who have been finalists in the iD Dunedin International Emerging Designer Awards over the 17 years of its existence. It also includes historical dress and accessories from the Otago Museum’s large collection. Graduates of any Fashion programme can enter their collections in the Emerging Designer Awards, and in the past, have had to come to Dunedin in order to show them to international and local judges and the public.

Twenty-four finalists’ garments were selected for the exhibition from countries as far-flung from New Zealand as Malaysia, Croatia, England, Iceland, USA and Bangladesh. Themes of escapism, gender, illusion, reinterpretation, sculptural, transformation and wellbeing, structure the groupings of garments. Part of our aim was to show that these themes had historical resonance: designers and makers had thought about these issues in the past as well as the present. Up to five museum items became part of each group. (Figure 2) A Robert Piguet new look suit reshaped femininity after World War 2 in the Illusion section, a late 1820s cotton dress showed off its gorgeously sculptural sleeves, a late nineteenth-century tea-gown allowed a woman to loosen her stays and relax for a time in the afternoon in the Wellbeing group (Figure 3), and late 1950s stiletto heeled court shoes gave the illusion of longer, slimmer legs, and symmetrical feet! 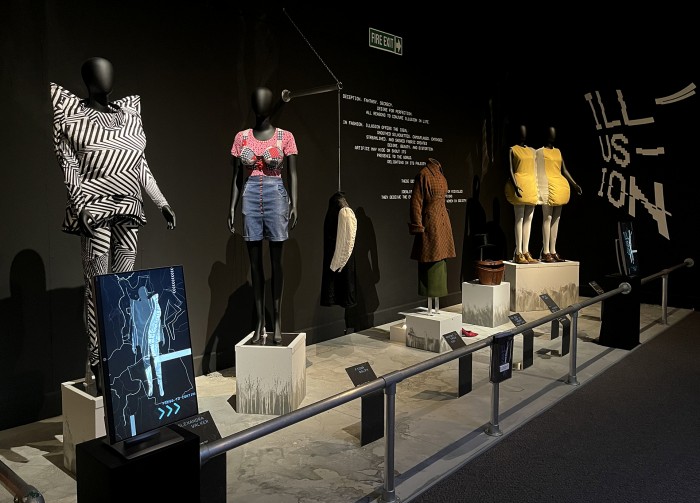 One look each chosen by five long-standing Dunedin designers was also included. Tanya Carlson of Carlson, Margi Robertson of NOM*d, Sarah Munro of Company of Strangers, Donna Tulloch of Mild Red, and Charmaine Reveley of Charmaine Reveley have supported, judged and been mentors to many emerging designers over the life of the iD Dunedin International Emerging Designer Awards, so we nicknamed them ‘the godmothers’, and their garments look over and guard the whole exhibition.

Because the opening had to be postponed from May 2020 until March 2021, we were able to crowdfund the production of a catalogue, with that funding matched by a generous donation from McMillan and Co., Lawyers. Associate Professor Ben Barry of the School of Fashion at Ryerson University, Toronto, Canada wrote an illuminating Foreword for the catalogue, which was also printed on the wall in the exhibition space. He highlighted how this pandemic can be a catalyst for changing the fashion system to something much more inclusive, sustainable and less exploitative of people and resources. Already-marginalised groups: queer, trans, disabled, or fat, for example, are creating their own fashions as protests against the industry’s ideas of embodiment. 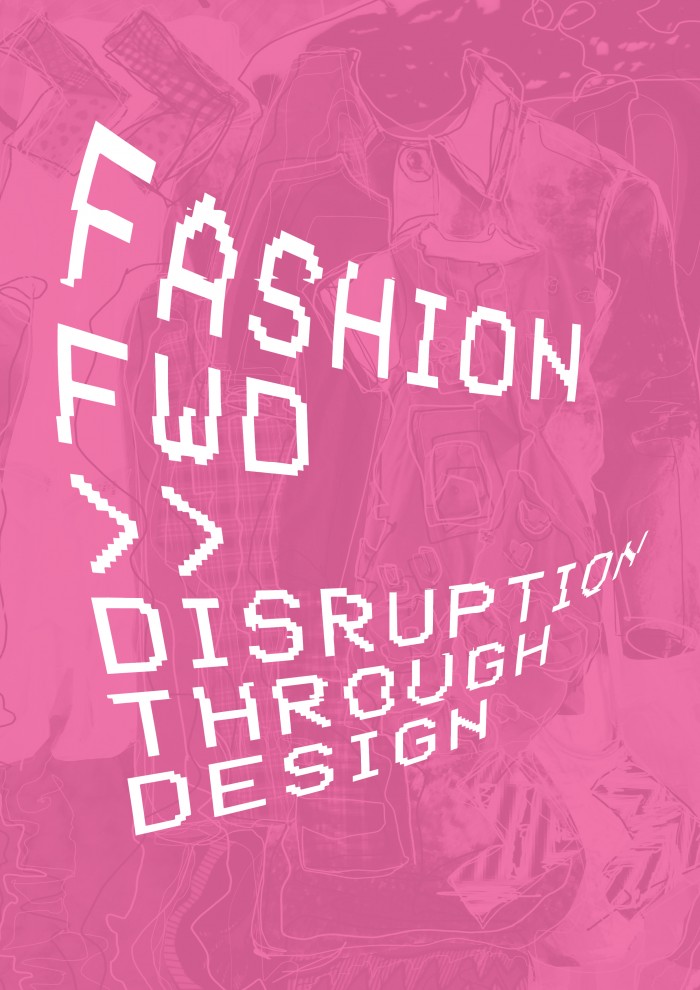 In the catalogue we were able to generously illustrate the designers’ contributions within their theme.  Close-up details, as well as long shots, give readers a sense of the multiple design decisions and workmanship in each outfit. The photographs of Ilham Ismail’s design from her “Universal Fingerprints’ collection show front, back and angled views, details of her fabric prints and how the layers fit and work together. Her collection won a Special Achievement Award in the 2016 Awards, and spelled out ‘peaceful co-existence' in its calligraphy (Figure 4). Ruth Bucknell’s graduation collection focussed on the many and varied roles modern women occupy, and questioned how sustainable this is (Figure 5). The intricacies and many techniques (such as tailoring, smocking, crochet, knitting, embroidery as well as sewing) involved in her multi-layered outfit are highlighted in the printed images. She was a finalist in 2009. The clever re-use of deadstock white shirts in Paul Castro Alvarez’s dress is emphasised in images. His collection gained 3rd place in 2017 (Figure 6).

Museum garments were given similar space and detailed images. Readers can see details more clearly, or some elements are usually hidden when garments are on show in a museum gallery, such as back view, inside linings, or close-ups of stitching. A 1922 going away brown wool gaberdine suit has a colourful patterned jacket lining, a woman’s early twentieth-century driving coat has wonderfully pinked seam allowances inside, a man’s smock has beautiful smocking stitches and cuff embroidery, the kaka beak plant motifs from kowhaiwhai rafter patterns have been translated into machine embroidery on a 1970s Māori fashion renaissance dress (Figure 7).

Interviews with the Dunedin-based or born  ‘godmothers’, and images of their selected pieces round out the catalogue. As they all said: it is hard to pin down why Dunedin provides their creative fuel. It is to do with the relationship with land and sea, the ability to have a good work-life balance here, Dunedin’s appreciation of the arts and fashion and reputation for breaking rules, disrupting design, and thinking outside the box. The design team at Otago Museum, and especially Craig Scott, Prudence Jopson and Shanaya Cunningham certainly did that in working their magic on the layout and look of Fashion FWD >> Disruption through Design, developing disruptive typefaces and colours for the catalogue, exhibition walls and touchscreens (Figure 8). They also shaped the look by creatively reusing and recycling materials from previous exhibitions to keep costs down.

The paper catalogue will outlive the exhibition and we hope it will inspire future designers to break rules, disrupt mainstream fashion and let their imagination and creativity loose.

Fashion FWD: Disruption through design ran March 21 - October 17, 2021 as a physical exhibition at Otago Museum, Dunedin, New Zealand, as well as a paper catalogue and is currently a virtual exhibition experience.

Figure 8: Example of typeface and graphic in Fashion FWD catalogue 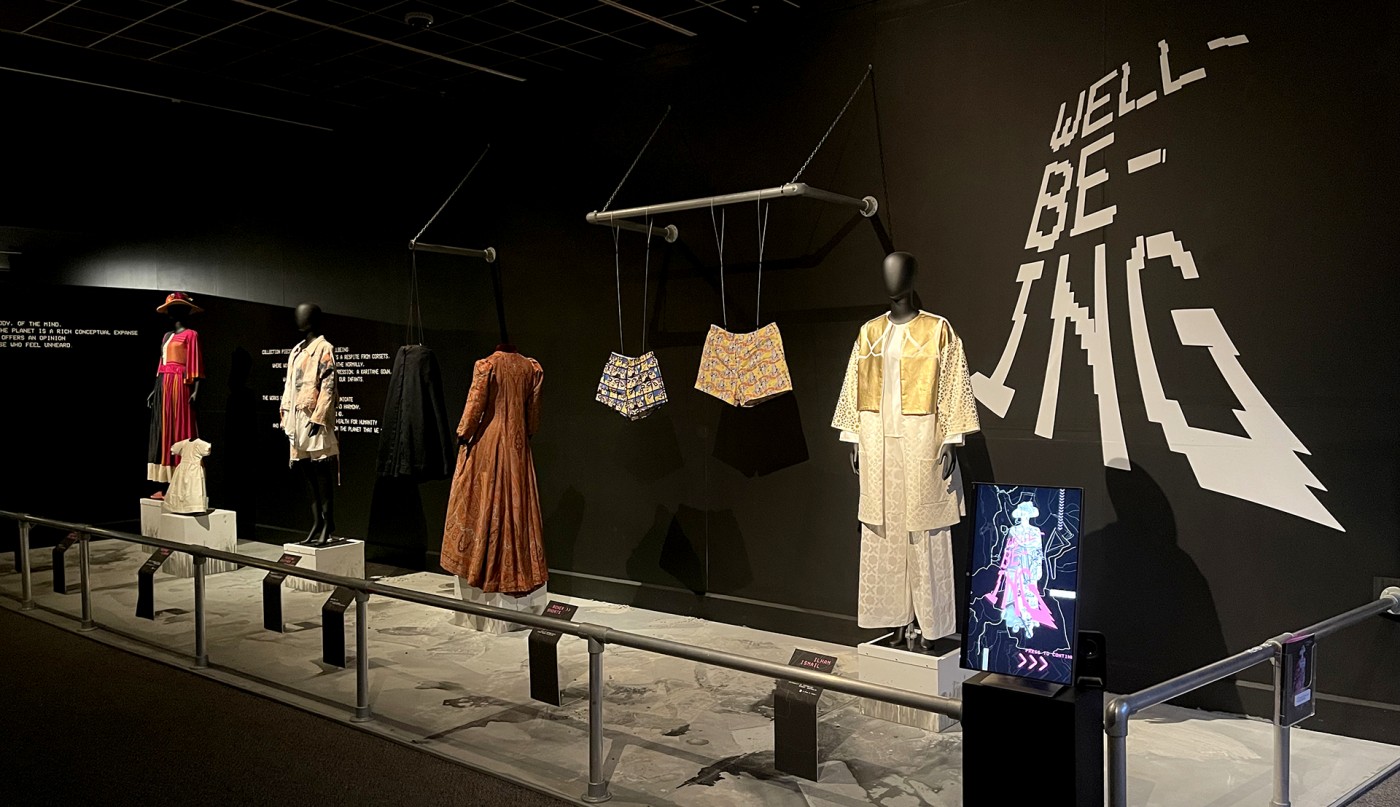 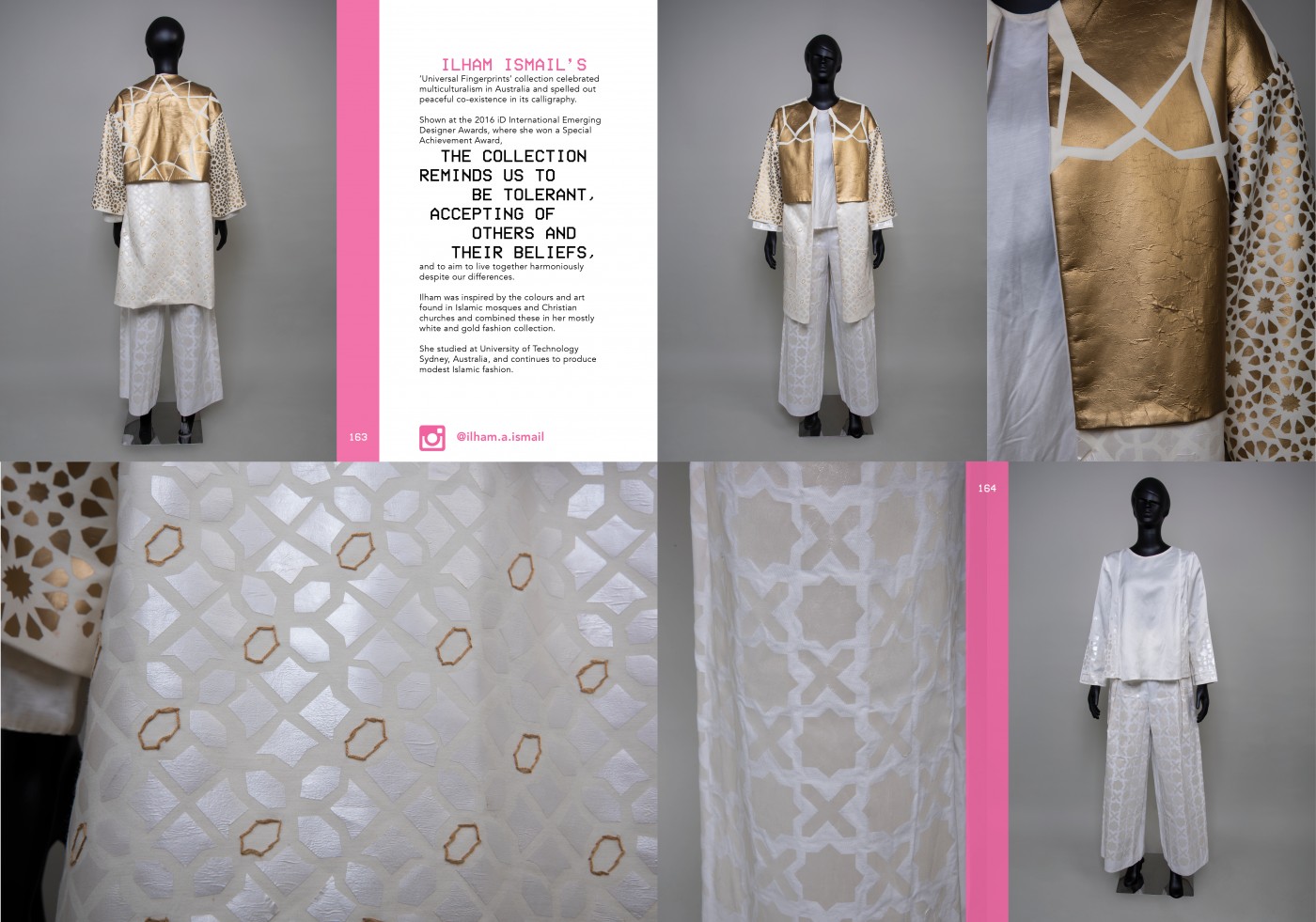 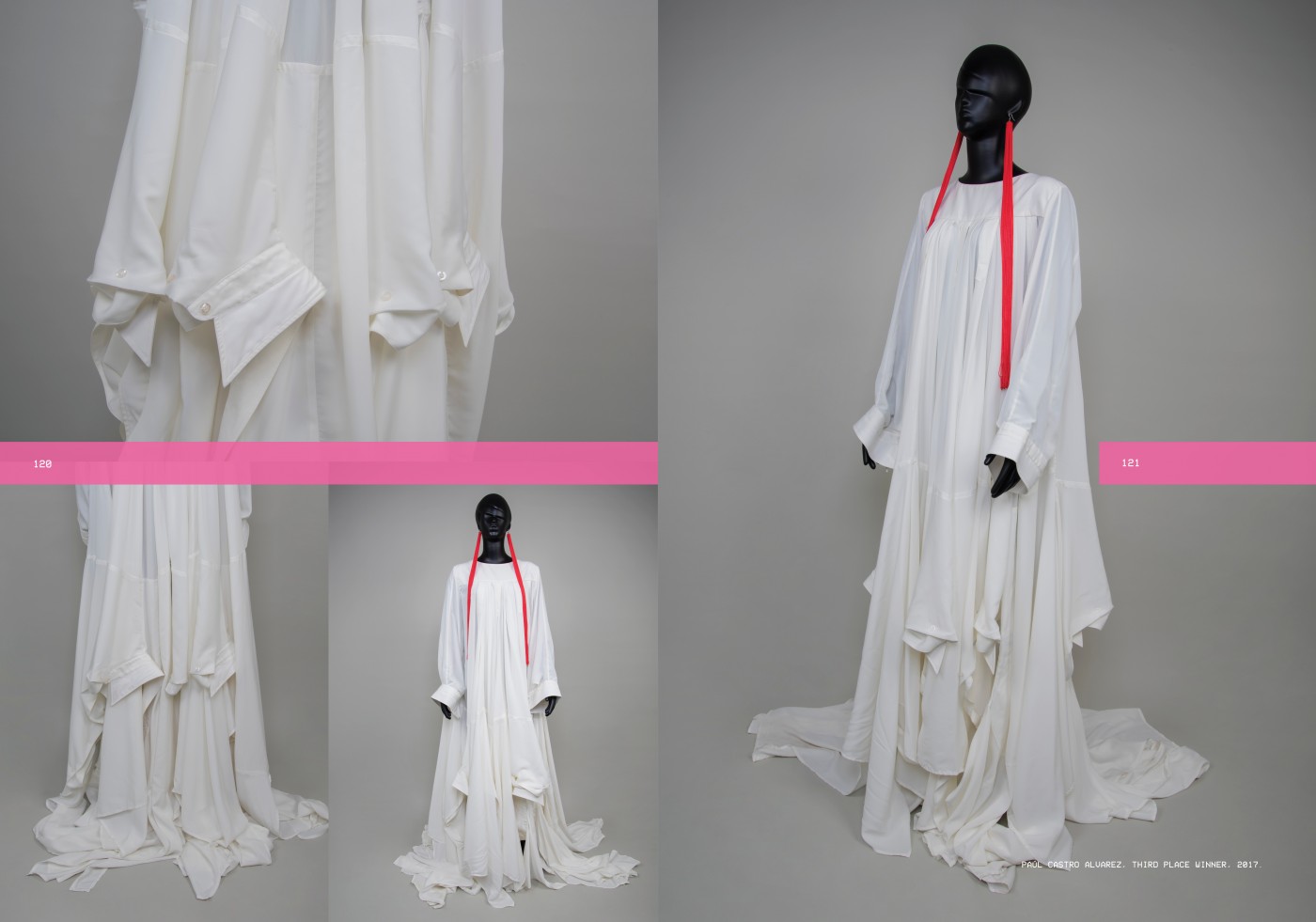 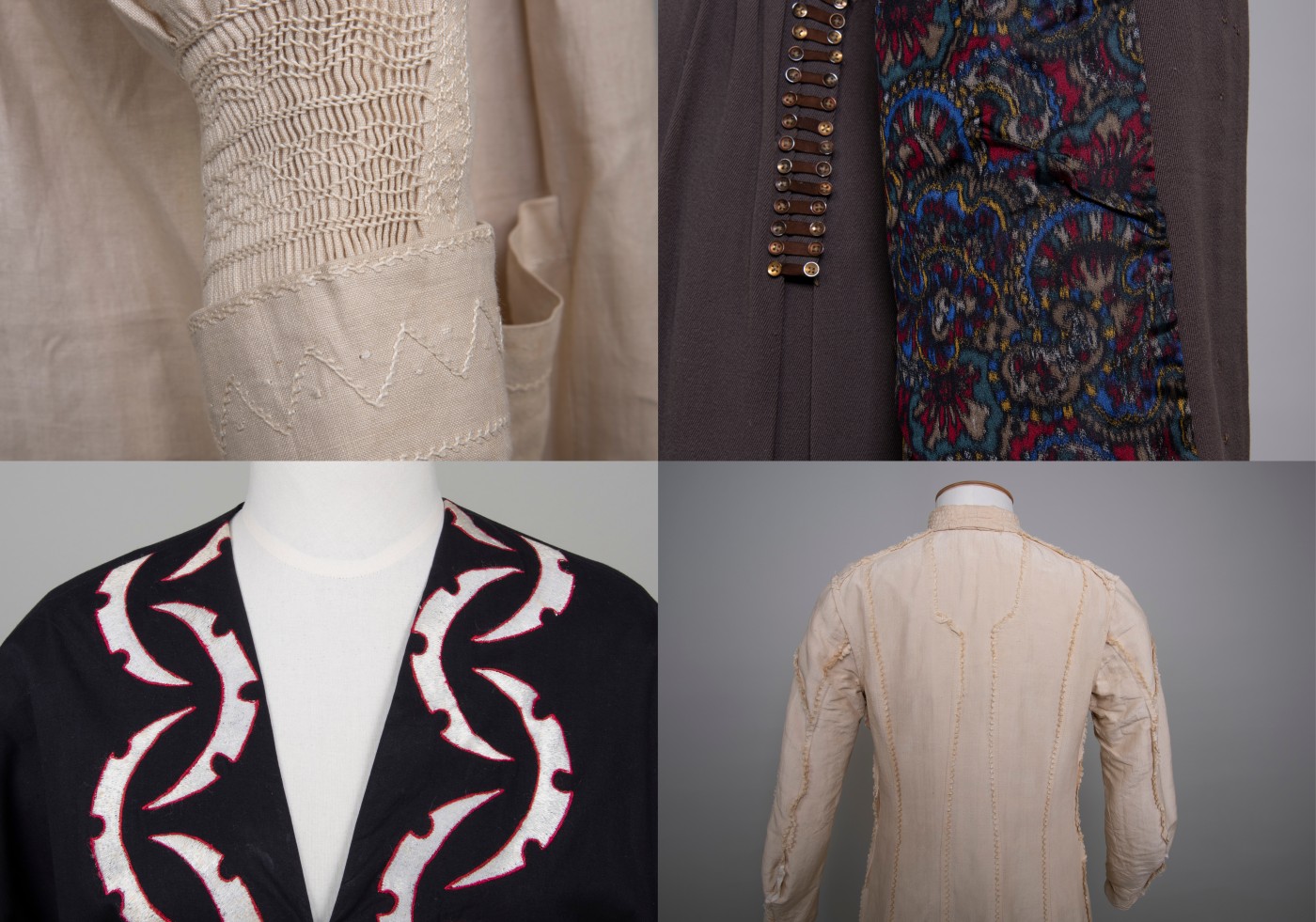 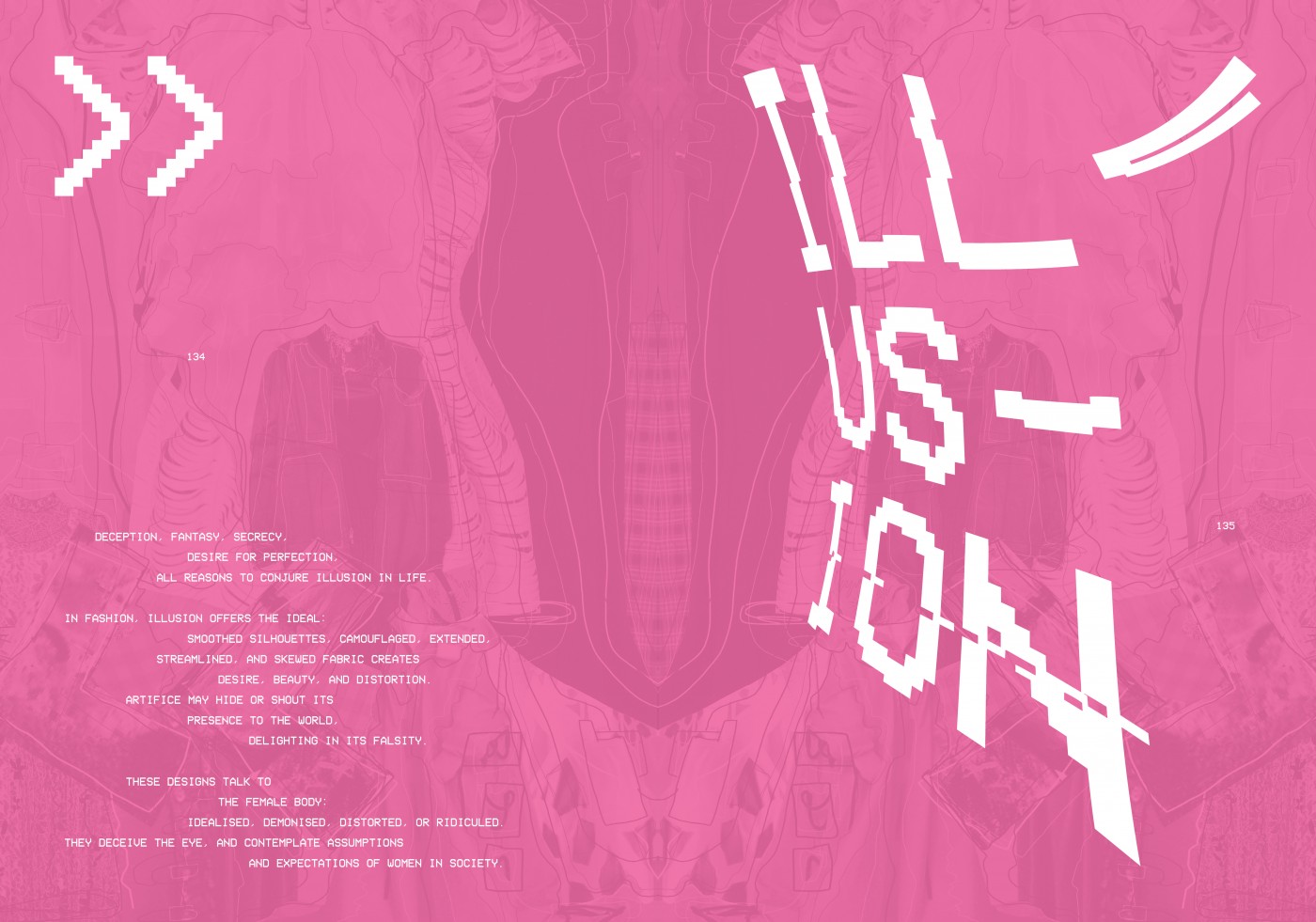 Example of typeface and graphic in Fashion FWD catalogue