Guest Blog Month, 2021.The Time of Slavery at the White House: Elizabeth Keckley’s Written Garments and Inscriptions of the Unspoken.

In the fifth of our Guest Blogs, Kimberly Lamm presents her current research on Elizabeth Keckley’s Behind the Scenes: Or, Thirty Years a Slave, and Four Years in the White House (1868), exploring the figurative connections between clothing and writing, fabric and paper. 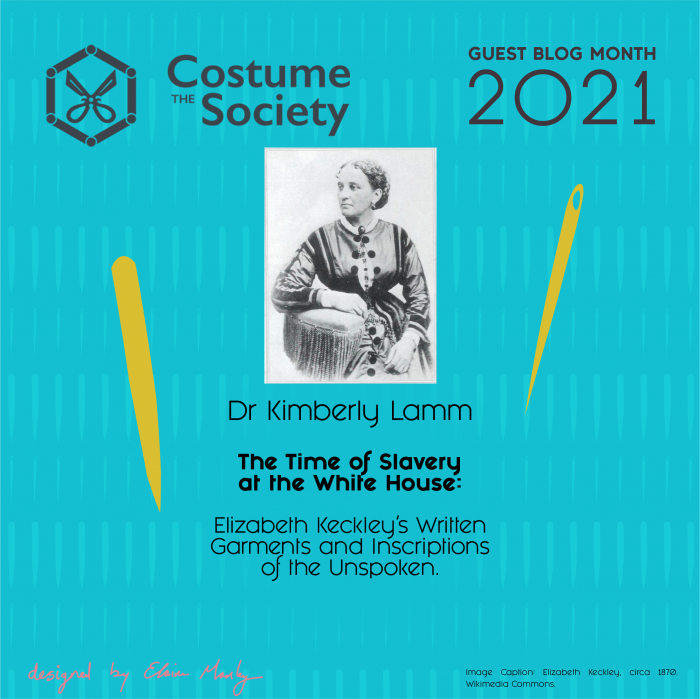 This week, central to each of our blogs has been written documents that have inspired and enabled research, highlighting the power of such sources in researching the history of clothing. Today's blog looks to 19th century America and the work of Elizabeth Keckley. Keckley was a former slave who became a successful modiste, civil activist, and author. In her blog, Kimberly Lamm, Associate Professor of Gender, Sexuality, and Feminist Studies at Duke University, presents her current research on Elizabeth Keckley’s Behind the Scenes: Or, Thirty Years a Slave, and Four Years in the White House (1868), exploring the figurative connections between clothing and writing, fabric and paper.

We want to highlight to our readers that included in this blog are mentions of the physical and sexual violence suffered by Elizabeth Keckley. The paragraphs that contain such material are noted with a single asterisk *.

Over the past year, I have been reading and thinking about Elizabeth Keckley’s 1868 memoir Behind the Scenes, Or, Thirty Years a Slave, and Four Years in the White House. How does Keckley’s book, which rewrote the well-established patterns of the antebellum slave narrative, connect to her dress designs? Is there a way to link the life story she inscribed on paper to the dresses she composed with fabric? Answering these questions is more complicated than identifying the ‘written garments’ she crafted with words, as Keckley’s text carries the traumas inflicted during slavery and repressed into silence [1]. 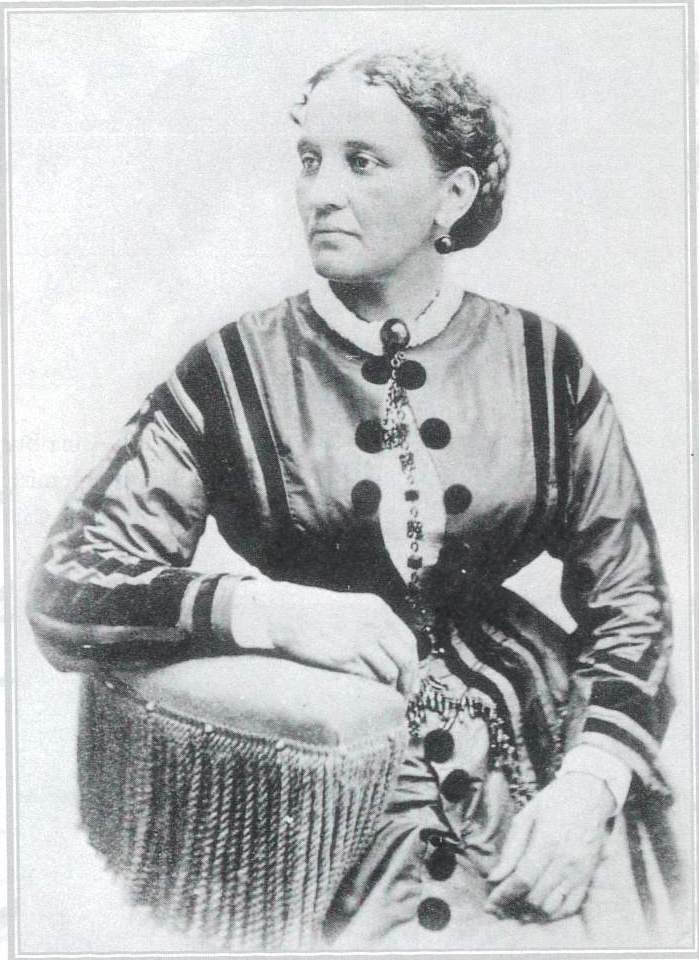 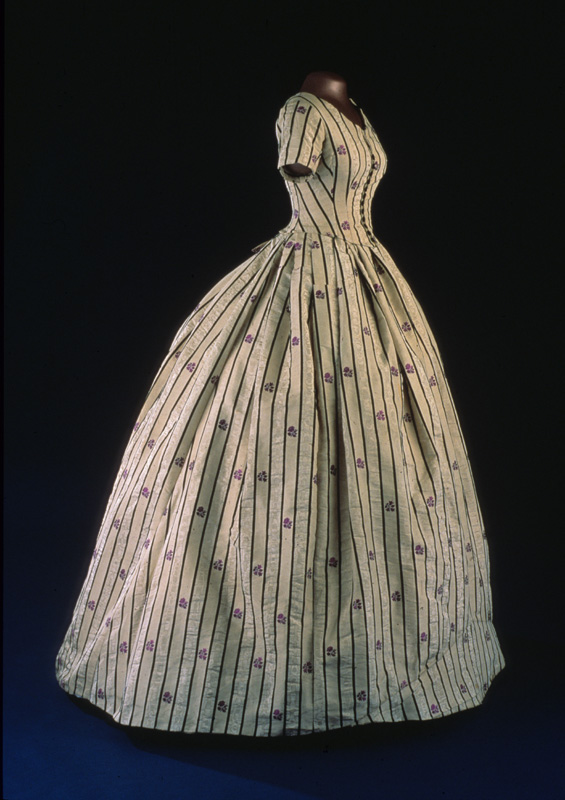 Before Keckley published Behind the Scenes, she was a highly successful modiste, fluent in the fashions of the late nineteenth century. While there are only four pieces attributed to Keckley in museum collections—a tiny fraction of the thousands of dresses she produced from a lifetime of work—they exhibit a distinct style: bold, witty, and innovative. According to fashion scholar Elizabeth Way, the clean, elegant lines and ‘graphic simplicity’ of Keckley’s dresses subtly undercut the ornate trimmings and ostentatious frills associated with Victorian women’s clothing [2]. Keckley’s skills as a dressmaker and designer emerged out of her work as a slave in Virginia. She learned to sew in an effort to help her mother, Agnes Hobbes, meet the clothing needs of their owners, the Burwell family. Behind the Scenes demonstrates that making and caring for clothing was part of the reproductive labour assigned to enslaved women, and Keckley shows that the demands she had to meet were unusually cruel [3].

* In the chapter that opens Behind the Scenes, Keckley writes about her earliest memory. At four years old, she was to care for the Burwell’s newborn daughter [4]. This ‘duty’ entailed a ‘transfer’ from the ‘rude cabin’ where she lived ‘to the household of my master,’ and Keckley registers the sartorial privileges that accompanied this move [5]. ‘My simple attire was a short dress and a little white apron,’ she explains [6]. The benefits of serving as a ‘little maid’ were ruses [7]. The care she was expected to give did not extend to her. After she rocked the Burwell baby out of its cradle and it fell on the floor, she was punished, and its severity was inscribed into her memory: ‘The blows were not administered with a light hand, I assure you, and doubtless the severity of the lashings has made me remember the incident so well’ [8]. As Keckley shows, emotional responses to such events were considered punishable transgressions and were harshly repressed.

*The textual proximity of this whipping to the description of the clothing Keckley wore as a little girl foresees a scene in North Carolina, where she was enslaved to Mr. Burwell’s son. A schoolmaster in their vicinity, Mr. Bingham, a ‘hard, cruel man,’ demands that she ‘take down [her] dress’ so he can whip her [9]. Infused with her refusal, Keckley’s dress becomes a symbol of protection all the more poignant for the abuses clothing cannot defend against. While Keckley renders this beating in graphic detail, she only touches upon the series of sexual assaults she suffered at the hands of an anonymous white man. After stating that the memories are ‘fraught with pain,’ she writes, ‘Suffice it to say, that he persecuted me for four years, and I—I—became a mother [10]. Between the first and second ‘I,’ Keckley renders the narrow space in which she could express her emotional responses to the sexual violence endemic to slavery.

Exchanged to Mr. Garland, husband of her master’s daughter, Keckley went back to Virginia and then moved to St. Louis. Making dresses for the city’s ‘best ladies,’ she was able to keep ‘bread in the mouths of seventeen persons for two years and five months’ [11]. It also enabled Keckley to purchase her freedom for herself and her son George [12]. In 1860, Keckley left St. Louis for Baltimore. Buttressed by her strong connections and good reputation, she began working as a modiste in Washington DC, designing dresses for the wives of men in the upper echelons of the US government. Her most famous client was Mary Todd Lincoln. Keckley created elaborate costumes for the wife of President Lincoln during his first term, and forty-two days into his second term (1861-1865). The stories she tells of her work at the White House reveals the tremendous time constraints she was placed under and attending to Mary Todd Lincoln’s fragile emotional state compounded her toil.

Ostensibly, Keckley wrote Behind the Scenes as a rebuttal to the ‘Old Clothes Scandal,’ Lincoln’s attempt to sell off her extravagant wardrobe after the Lincoln assassination. The press that excoriated Mary Todd Lincoln for indecency ended up targeting Keckley for crossing the racialised lines of privacy. And yet Behind the Scenes is also Keckley’s claim to the multiple forms of labour she gave to elite white women’s sartorial displays. Before designers had signature brands, Keckley inscribed her name, story, and skill into the pages of her book.

I would not now be toiling by day with my needle, and writing by night, in the plain little room on the fourth floor of No. 14 Carroll Place.

Keckley stresses the difference between her life as an enslaved woman and the freedom she gained as a successful dressmaker, and Behind the Scenes can be read as an effort to leave the pain of slavery behind. At the same time, the book shows that the White House was still operating under what Saidiya Hartman identifies as the ‘time of slavery’: the ‘[r]acial subjection, incarceration, impoverishment, and second-class citizenship’ that continued long after Emancipation [13]. For Keckley, slavery continued through the demand to produce dresses of the highest quality at an unrelenting pace. More insidiously, slavery was extended by the unquestioned expectation to serve as the First Lady’s intimate confidante.

Lincoln enlisted Keckley’s help for the sale of her clothing, and her design business never recovered. She concludes Behind the Scenes writing from a rooming house in Brooklyn and makes the first explicit connection between writing and dressmaking: ‘If poverty did not weigh me down as it does,’ Keckley writes, ‘I would not now be toiling by day with my needle, and writing by night, in the plain little room on the fourth floor of No. 14 Carroll Place’ [14]. Keckley asks her readers to see clothing as a language that is inscribed on both fabric and paper, expressing what a Black woman in the late nineteenth century could not say about the writing of slavery’s afterlives.

Kimberly Lamm is Associate Professor of Gender, Sexuality, and Feminist Studies at Duke University, where she teaches courses on feminist art, literature, and visual culture. Lamm is the author of Addressing the Other Woman: Textual Correspondences in Feminist Art and Writing (2018), which explores the literary dimensions of feminist art practices from the late 1960s and 1970s. Currently a fellow at Cornell University's Society for the Humanities, she is working on a project that examines representations of fashionable clothing in Black women's writing from the late nineteenth century to the middle of the twentieth.