by Tracey Allen (This article first appeared in RAF News, published with permission)

As the bombs rained down on London during the Blitz, the inimitable British Vogue editor Audrey Withers carried on working undaunted from a basement office in New Bond Street. She was adept at handling her celebrated contributors, including photographers Cecil Beaton and Norman Parkinson and model-turned-war reporter and photographer Lee Miller. She championed austerity – she was nicknamed ‘Austerity Withers’ – helped keep the nation’s spirits up and increased the magazine’s sales during wartime to 80,000 a month. Vogue – and Withers – had a good war.

But why has this phenomenally successful woman remained largely forgotten – until now?

In her fascinating biography of Withers, Dressed for War, bestselling author and historian Julie Summers (Fashion On The Ration) reveals that it was partly because of the ‘Swinging Sixties. Withers, who edited Vogue from 1940 until 1960, realised that the new decade wanted fresh faces and was hungry for youth. By then, Withers was 55. Summers said

“I think the Sixties took everyone by surprise. Vogue did change quite dramatically with the influx of models like Twiggy and Jean Shrimpton and photographers like David Bailey. When Audrey retired, the terrible back problems she had suffered from became acute. Her second husband, Victor Kennett [a Russian-born photographer], thought she was making it up and had her sectioned in a psychiatric hospital.”

Fortunately, a doctor did believe she was in real pain and it wasn’t psychosomatic, brought on by the trauma of retirement. Somewhat surprisingly, the marriage survived – Audrey and Victor stayed together until he died in 1980. Summers added “After Audrey retired she and Victor spent a lot of time in Russia. She disappeared off the radar for more or less 20 years.”

Born in 1905, Audrey read Politics, Philosophy and Economics at Oxford and, after graduating, worked in The Times bookshop, then joined the advertising department of a small West End publishing house. She was made redundant when the publisher decided to replace her with a man. She then joined Vogue as a sub-editor. In the early 1930s, Summers explained, the publication was in its second decade in Britain and its fourth in the USA." She added “It was, and has remained, the world’s pre-eminent fashion magazine. From the beginning, it championed excellence in all areas. It has also had the confidence to change with the times.”

Withers went on to become Managing Editor, then Editor, where she cultivated a team of top-flight talent, including Beaton – embedded with the RAF during World War II – and the fearless photojournalist Miller, who covered the concentration camps at Buchenwald and Dachau for Vogue. Withers was the first female photographer to enter Dachau.

It was Withers’ idea to commission Beaton in 1941 to take the iconic photograph with the caption ‘Fashion is indestructible’, showing a model posing against the bombed ruins of the Temple in London. Summers said

“Beaton and Miller loathed each other, due to professional jealousy. Beaton was so important to Vogue and saw Lee as an interloper. Lee was everything Audrey was not: attractive, sexy, outspoken, she drank heavily, smoked prodigiously and swore like the proverbial trouper. She fizzed with energy, humour and artistic talent, but she was also vulnerable, a side that few who met her saw. Audrey saw it all – and liked what she saw.”

Summers added: “Audrey’s legacy was her work with Lee. It was tremendous. Anthony Penrose [Lee Miller’s son] said she was the only person who could handle his mother.”

While researching Dressed for War, Summers came across an incredible find – an archive of hundreds of memos between Withers and her US Vogue counterpart, Edna Woolman Chase. The author said “There were 900 memos and I am the only person who has read them all.” When the 35-year-old Withers took over as editor of Vogue on September 25, 1940, three weeks into the Blitz, the magazine was somewhat in the shadow of American Vogue, its older stablemate. As the war continued, Withers influence over British Vogue increased and the magazine drew away from the style and preoccupations of the US title. Summers said

“Audrey had a ‘can do’ attitude. She realised she had a weapon of war in Vogue and used it. There was spending power because there was full employment during the war – women had money for the first time. Audrey was very good at telling people how to deal with austerity. The government was very keen to get its message across and what better place to tread that message than in a magazine you revere and trust. The government didn’t want people to be dressed sloppily because it was very bad for morale.”

She added “Government ministers in every department consulted her, as the editor of the most influential women’s magazine in the country, whose readers were people of prominence and status. If Vogue readers could be persuaded to change the way they dressed, what they ate or how they worked then the rest of the female population would follow. Over the course of WWII Audrey came to be recognised as one of the most powerful women in London.”

After the war Audrey reigned supreme at Vogue for another 15 years. She also served on the committee for the Britain Can Make It exhibition at the Victoria & Albert Museum with Anne Scott-James, editor of rival magazine Harper’s Bazaar (and mother of the military historian Max Hastings). The exhibition was the brainchild of Board of Trade president Sir Stafford Cripps. The board had set up the Council for Industrial Design to support Britain’s economic recovery after the war and promote ‘the improvement of design in the products of British industry.’

Audrey Withers died in 2001, aged 96. Summers said, “Everyone who met her commented on her eyes that sparkled with enthusiasm even when she was well into her nineties.” 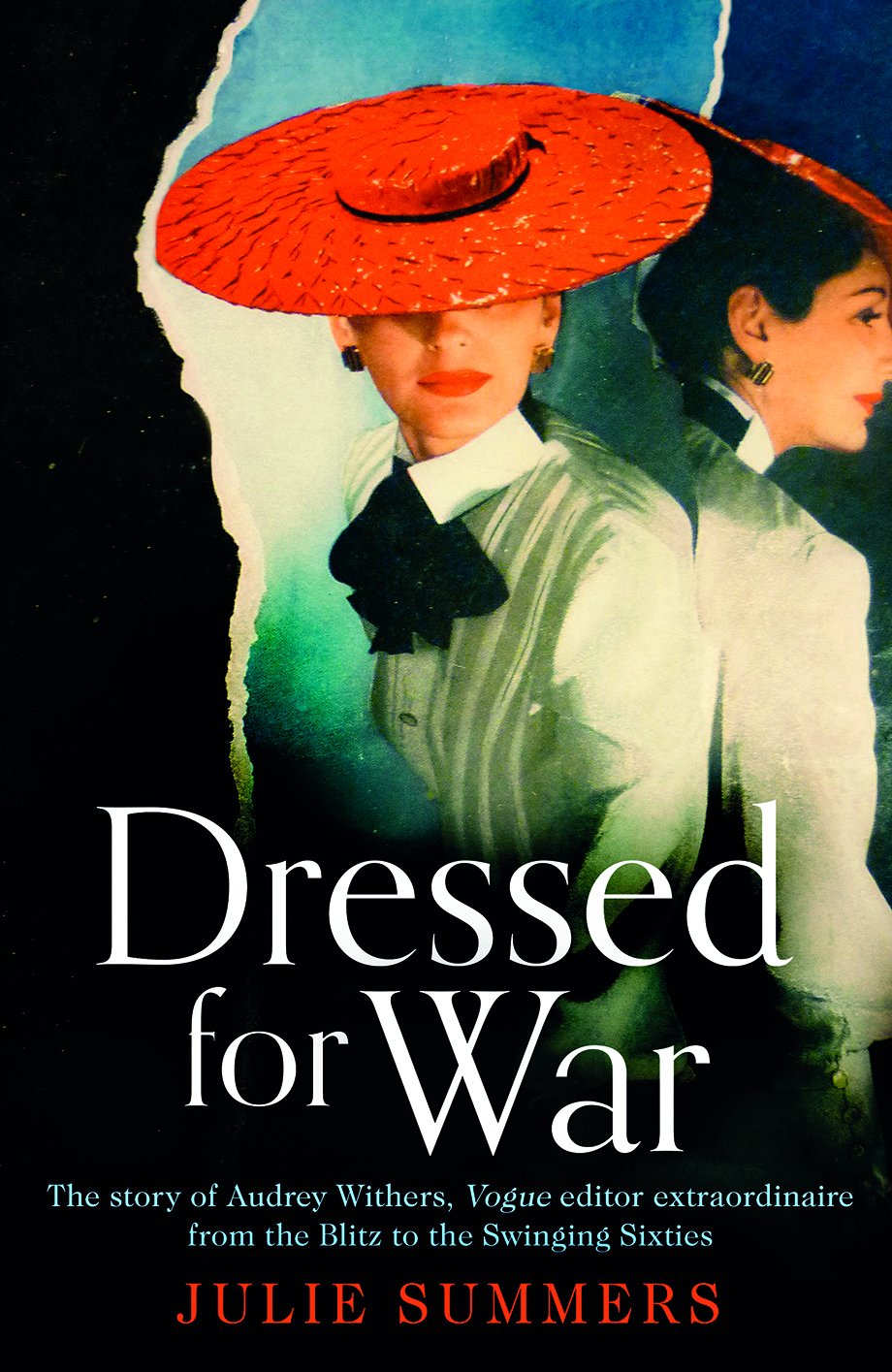 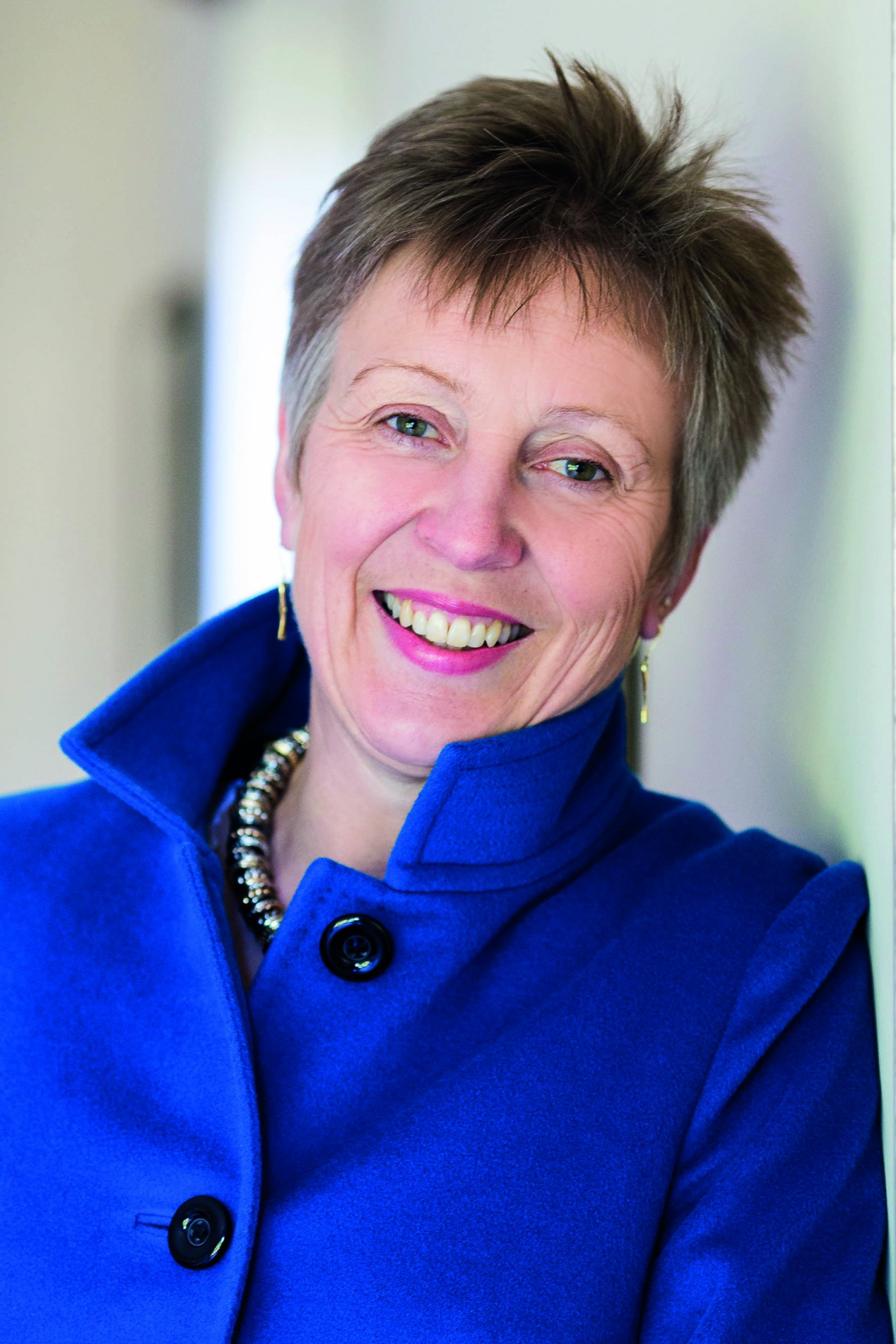 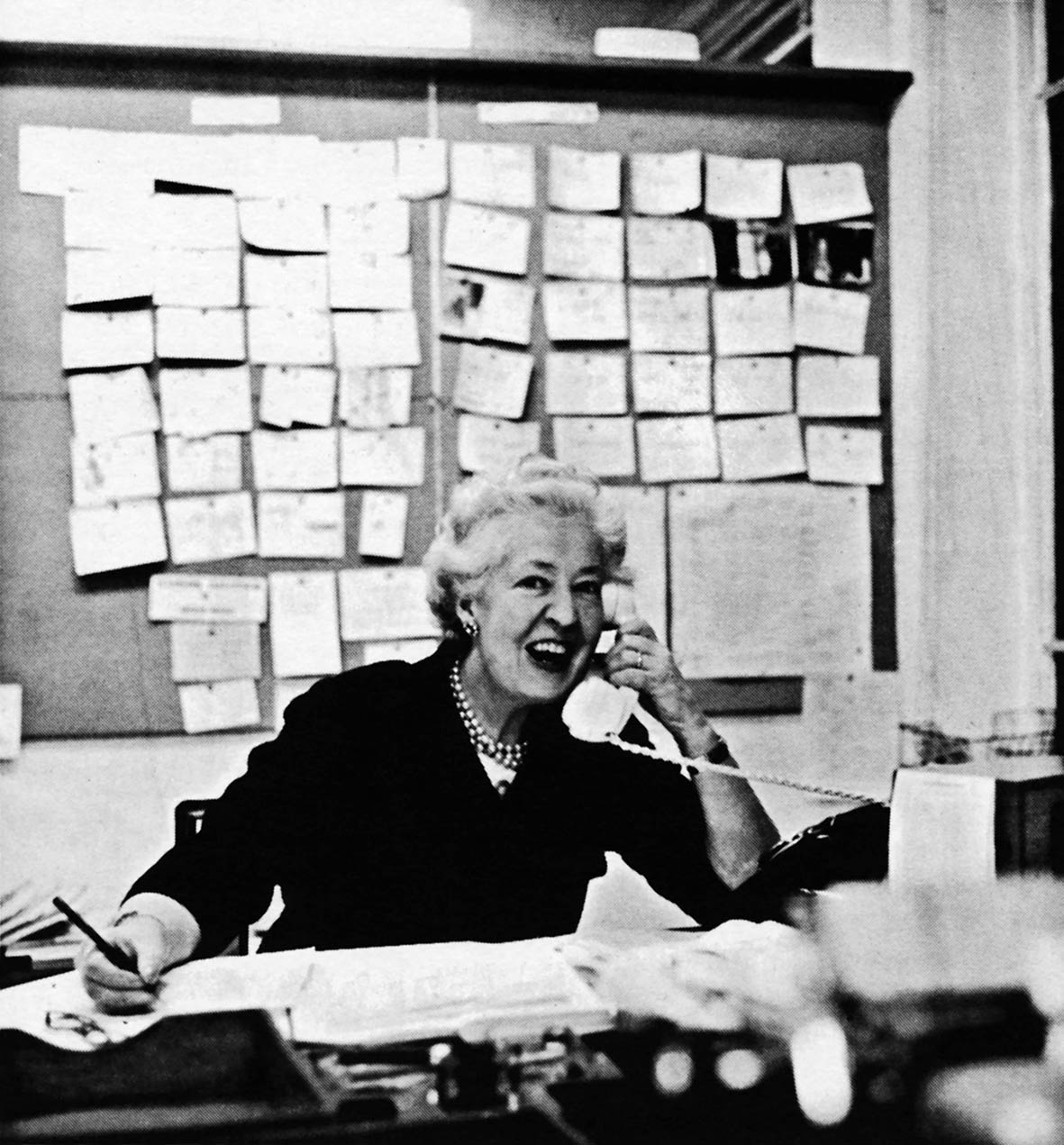 Harry Yoxall and Secretary Vera Self in the director's officer, One New Bond Street after a bomb blast, October 1940 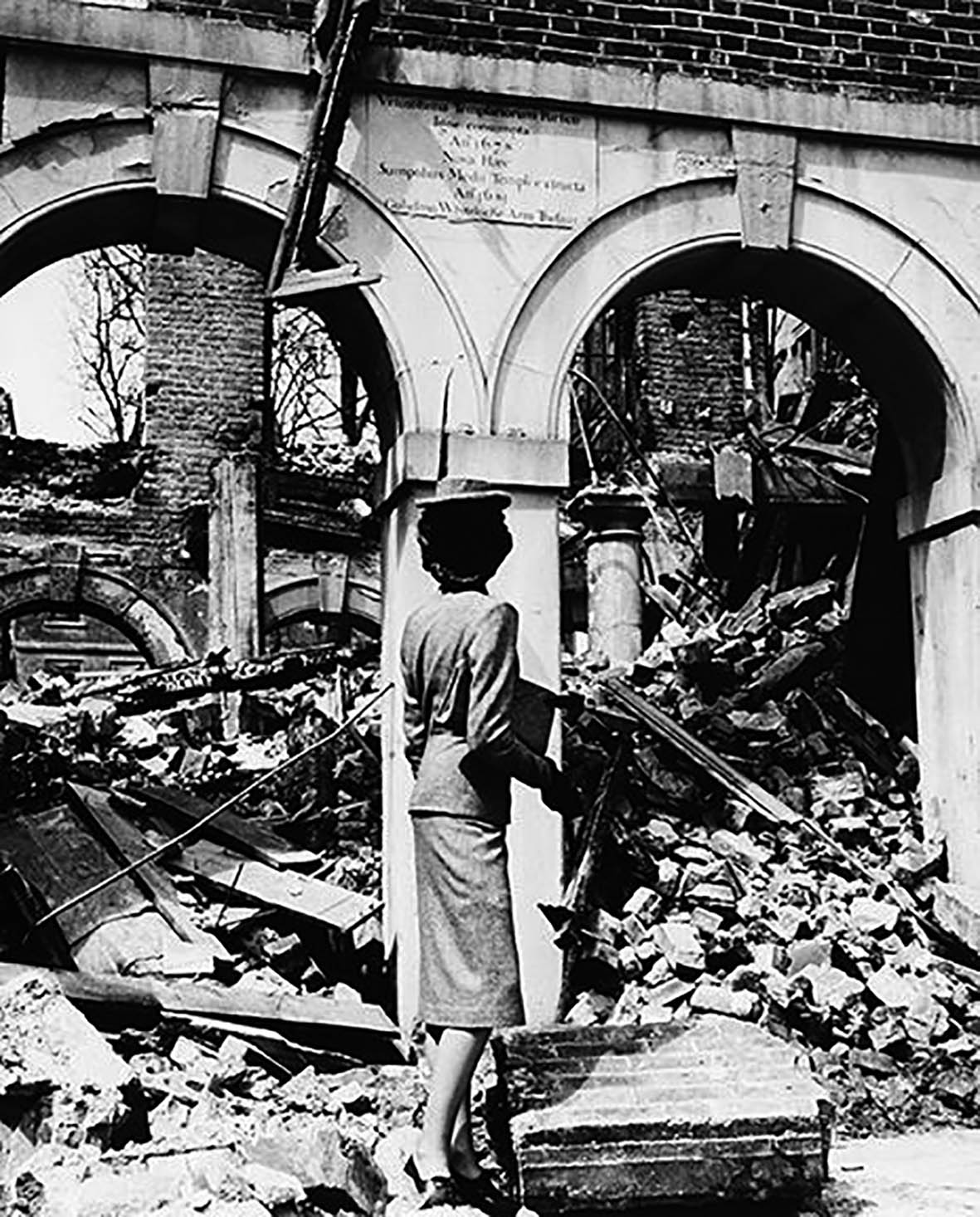