Now re-opened to the public, CS Ambassador Abigail King was lucky to see the much anticipated exhibition Kimono: Kyoto to Catwalk. In this week's blog, Abigail shares her experience and highlights some of the exhibition's major themes.

Despite having to close its doors shortly after opening in February, the Victoria and Albert Museum is now welcoming back visitors to ‘Kimono: Kyoto to Catwalk’. The exhibition aims to present the kimono to the public as a ‘dynamic and constantly evolving icon of fashion’ in order to reveal its significance both socially and sartorially, from the 1660s to present day, charting its history both in Japan and the rest of the world.

Unlike some of the more recent fashion exhibitions, walking into ‘Kimono: Kyoto to Catwalk’ is a calming experience, probably helped by the current restrictions on visitor numbers, meaning the quietness of the exhibit is uninterrupted. The green walls, white drapes delicately hung from the ceiling and traditional shoji partitions give the exhibition the carefully composed feel of Japanese architecture, the simplicity of the set design countered by the kimonos, their colours, patterns, and textures challenging the unchanged and traditional image of them.

Curated by Anna Jackson and Josephine Rout, it opens with an introduction to the kimono in three variations – the traditional kimono, on loan from a collection in Japan, a catwalk piece designed by John Galliano for Christian Dior and a contemporary kimono by Jotaro Saito which is currently for sale in Tokyo. Immediately, the viewer is opened up to the many possible forms a kimono can take.

Firstly, the exhibit looks to Kyoto to tell the story of the kimono as an embodiment of Japanese culture, its sensibilities and national identity. The walls are decorated with long stretches of ornate embroidered silk panels, accompanied by illustrations and designs, the kimonos mounted on figureless stands allow for the intricate and exquisite patterns and textures to be admired but this can occasionally give the vibrant garments a lifeless quality. This is keenly balanced with the use of bespoke mannequins to display some of the antique kimonos, done in this way for the first time. These mannequins allow for a complete ensemble to be examined on a body so that the draped form of the kimono can truly be seen. A young woman’s outer-kimono is shown on one of the bespoke mannequins with a delicate grey mesh wig that allows for the female wearer to have a greater physical presence in the display cabinet as opposed to sitting flat against a wall. As well as looking at the decorative trends this section considers how the kimono conveyed status and style and how the fashion leaders of the period – the actors and courtesans – influenced the rise in conspicuous consumption.

From Kyoto to Europe, the second section investigates the introduction of Japanese textiles and dress to the West. As trade routes opened and industries rapidly modernised more and more people outside of Japan were wearing kimonos and many British and European designers began to take inspiration from the straight lines and draped form of the kimono. Adapting the kimono for a colder climate with slightly altered sleeves and thick wadding proved incredibly popular and these informal robes were worn around the house; their influence is still seen in our modern dressing gowns. The collection of kimonos and westernised designs illustrates the widespread influence of the kimono on western fashion, throughout this section comparisons can be made, and the juxtaposed styles clearly demonstrate where inspiration has come from and how it has been interpreted for a new market.

The exhibition culminates in a pristine white room, the curves of the display podiums accentuated by coloured stones and a large red niwaki tree, the atmosphere that of a zen garden. Here the kimono is transformed, where leading fashion designers’ haute couture garments sit next to outfits worn by celebrities and costumes from popular films that all take inspiration from the kimono. The modern iteration of the kimono from the streets of Kyoto is also displayed - the past, present and future of the icon garment expertly woven together.

As with many of the fashion exhibitions at the Victoria and Albert museum the set plays a huge role in the exhibitions ability to tell the garments story. The theme of the evolving nature of the kimono is carried forward throughout and is highlighted by the distinctive sets. These differentiate the separate sections and allow for the kimono to be seen in a new way outside of its traditional box. The use of both stands and mannequins enhances how the kimono is read as it permits not only for the surface design to be clearly seen but also for the shape and form of the kimono on a body to be fully understood. Overall, the exhibition is highly successful in its goal of representing the kimono not as a singular garment but as a continuously changing piece of fashion history. 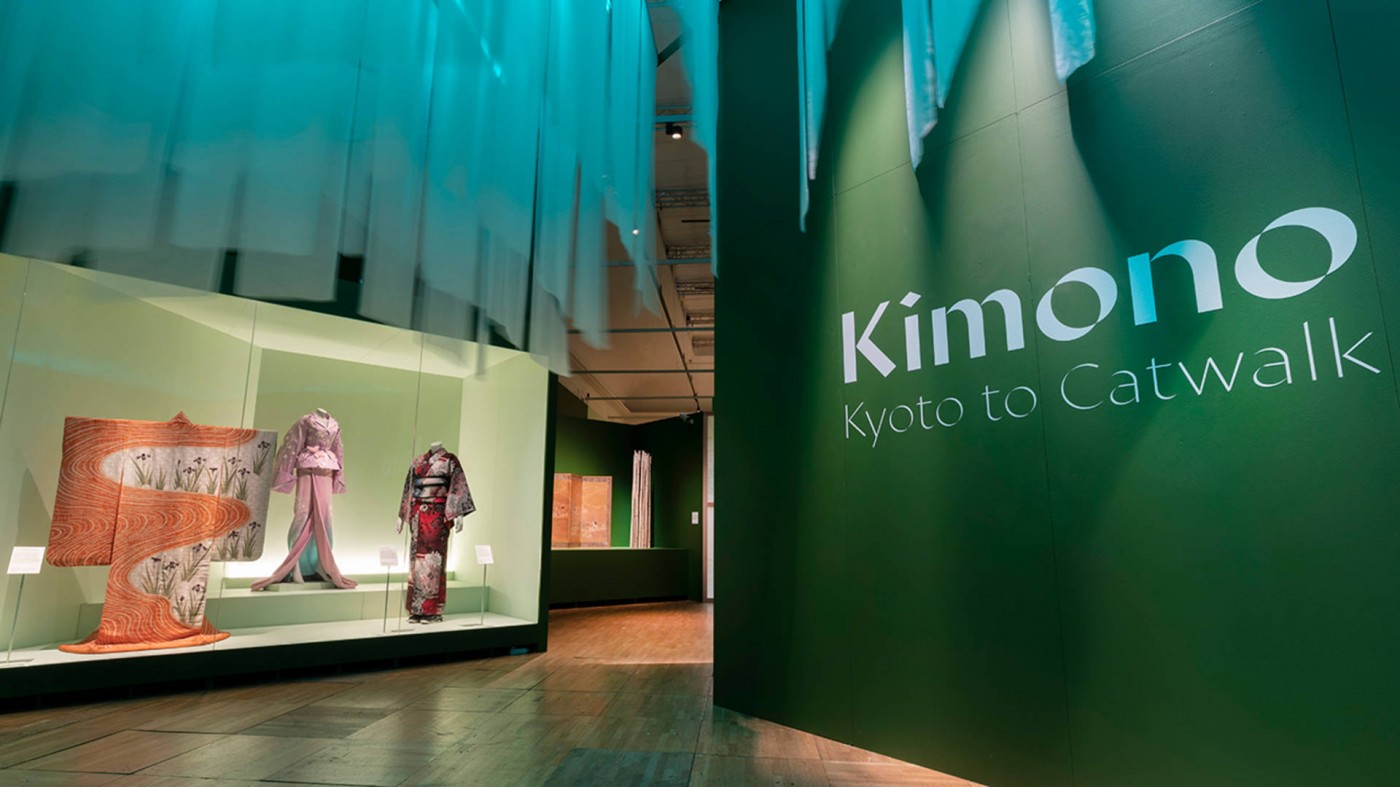 The entrance to Kimono: Kyoto to Catwalk, image taken by Abigail King 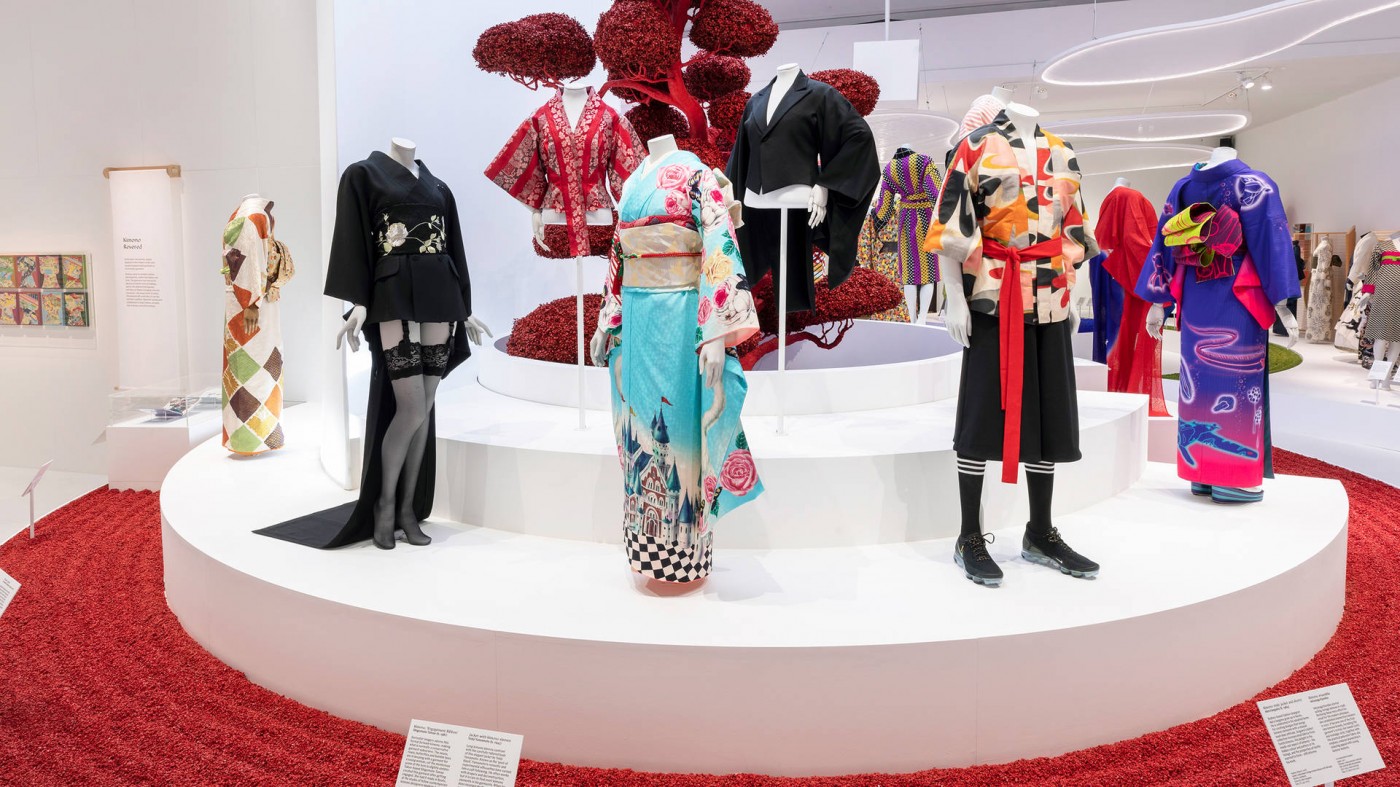 Inside Kimono: Kyoto to Catwalk, image taken by Abigail King