SM: Can you tell us about your design journey?

YK: I fell in love with theatre in my twenties, and studied directing and acting at the Performing Arts Academy in 1991. I made costumes and accessories for plays, and it was then that my interest in fashion started to blossom. So I found work as a sales clerk for a local brand named GV2 at the age of 24. I was in fact one of the founding members of the brand, which at the time of its launch was responsible for starting a blue jeans rage in Korea.

I worked at Cerruti 1881 where I not only supervised and trained the sales staff but was also involved in the buying of fabrics and materials. Then, I worked as the men's and women's ready-to-wear supervisor at Louis Vuitton Korea.

I learned to sew in 2003 under the master needlework craftsman Park Gwang Hoon, an Intangible Cultural Asset in South Korea. I took it on lightheartedly as a hobby in the beginning. However, as time went by, I became more and more engrossed, staying up many nights sewing. In 2004, I launched Tchai Kim Young Jin after making a hanbok dress for an acquaintance at the prompting of my friends. I followed with the launch of my ready-to-wear brand Tchai Kim in 2012. 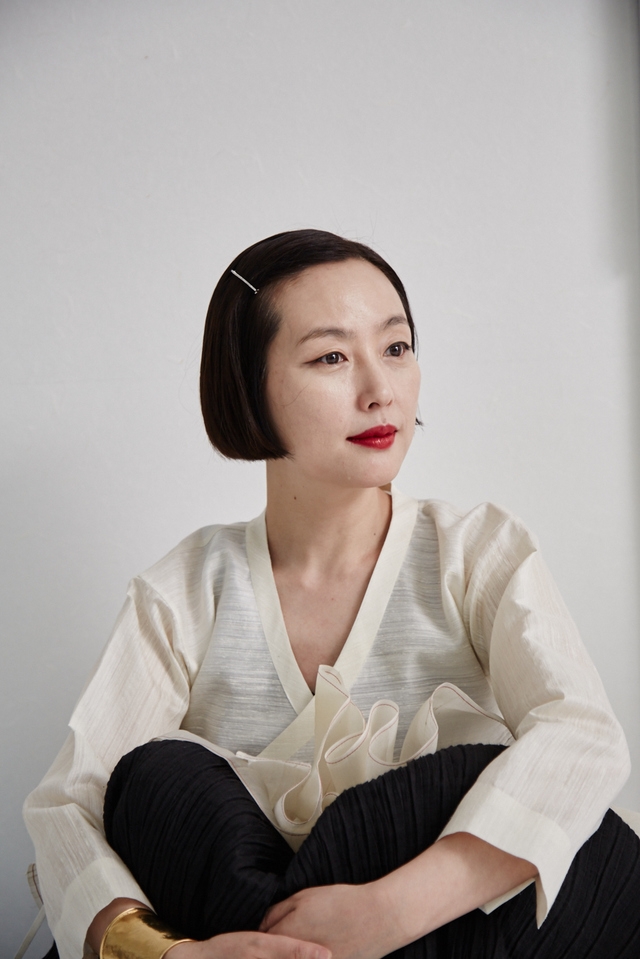 SM: Why did you choose hanboks and traditional design?

YK: It is related to the "identity" of the designer that I am. Being Korean, I wondered about what my ancestors wore in the past and what type of clothes I should design for the future. I wanted to go down a path that had not been tread before. I wanted to make clothes that our ancestors wore; approach fashion design from an Eastern, not Western, perspective; and create designs from a Korean point of view.

I was influenced by my older sister learning classical Korean dance. As a child, hanbok seemed so beautiful and magical. I felt like it would carry me off to a fairyland if I wore it. Hanbok stimulated my imagination since a very young age, and somewhere along the way, I formed the habit of observing everything through the lens of the hanbok. Hanbok is a medium that allows me to give shape to my imagination. From preparing a fashion show to the most trivial task, everything about creating something out of nothing through hanbok is such an enjoyable process for me.

SM: Who is your target customer?

YK: I can think of many artists whom I could call "muses" of the brand Tchai Kim. Lee Jaram is at once a classical pansori singer and a modern-day storyteller. Joo Bora offers a contemporary interpretation of the Korean harp gayageum. Doona Bae is an actor with a unique sense of style, recognized both at home and abroad. The play between tradition and modernity embodied by these three women and their one-of-a-kind appeal coincides with the direction that Tchai Kim pursues. "Tchai" of Tchai Kim Young Jin and Tchai Kim means "difference" in Korean. The word contains my wish for acceptance and respect of differences and for coexistence.

My clientele consists mainly of affluent people preparing for their wedding ceremonies. I also have a following of young customers who respect, engage in, and aspire to my brands’ aesthetics and values. 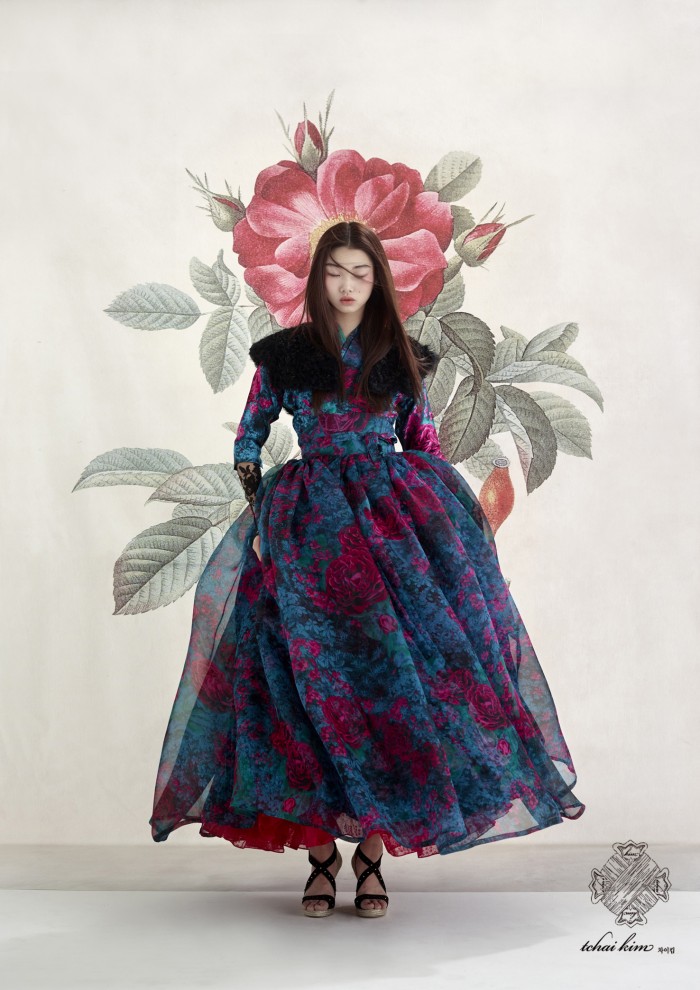 SM: What is your design process?

YK: I usually start from the fabric. Often, specific textiles give rise to certain inspirations. I also refer to books on art, history, cinema, performing arts, and excavated costumes. In the case of made-to-order hanbok, I select the fabrics and colors first based on the client's style, skin tone, occasion, season, and surroundings before proceeding to design.

Traditional hanbok is usually made with such traditional fabrics as silk, from fine gauze to Jinju and Sukgo silks, hemp, and ramie. Flat pattern making is employed, which means that the entire cloth is used rather than cut according to the line of the body. This results in generous volumes that allow for great freedom of movement. My fashion brand, Tchai Kim, on the other hand, proposes unique silhouettes that are created by combining both flat pattern making and draping, and ready-to-wear fabrics that are easier to wear and care for are used.

I use traditional Korean fabrics like silk from the Sangju region, fine gauze, Jinju silk, and Sukgo silk as well as ramie cloth, hemp cloth, and cotton to mention just a few, but I also incorporate non-traditional fabrics such as Italian silk organza, Liberty of London fabrics, French lace or Indian and Thai taffeta silk to create one-of-a-kind Kim Young Jin hanbok. However, I insist on using fine gauze or silk sourced locally for the inner lining regardless of what I use for the outer fabric.

I am versatile and mix traditional and modern methods of creation, adopting the useful and throwing out the inconvenient. All Tchai Kim Young Jin hanbok are custom-made by one dressmaker from the beginning until the end whereas Tchai Kim pieces are manufactured in factories based on pre-made patterns. Everything used to be handmade in the past, but nowadays, we use sewing machines. However, numerous parts of the hanbok including the neckband and the hems still require sewing by hand.

The fabrics and gold leaf patterns used in traditional hanbok are important for me. Traditional patterns such as pomegranates, plum blossoms, peonies, lotus flowers, and clouds are believed to invite wealth, honor, and good fortune to the wearer. Furthermore, Korea has always put a lot of importance on the five traditional colors of blue (East), white (West), red (South), black (North), and yellow (center), which each represent a bearing on the compass. Korea traditionally used fabrics dyed from natural ingredients in a wide range of hues. I try to respect these traditions while at the same time reinterpreting them with a sensibility that is unique to Tchai Kim Young Jin. For example, the traditional gold leaf Chinese character representing longevity, happiness, and peace is transformed into the Korean character "bom" meaning "spring" or modern-day prints like strawberries and ice cream. I also try to take the yin and yang of colors into consideration, combining and arranging cold tints with warm ones or bright colors with darker tones.

There is also my ongoing effort to establish my own way of dressmaking that marries traditional flat pattern making with Western draping all the while staying true to the silhouette of the traditional hanbok.

First of all, what makes hanbok different from other traditional dresses in the Asian region are the fabrics that are used and the unique volume and proportions (fitted top and generous bottom) of the jeogori (upper jacket) and dress. However, I believe that, above all, the difference originates from the Korean people’s singular sense of aesthetics. At the risk of generalizing, even within the same Asian culture, if the Chinese aesthetic is extravagant and the Japanese aesthetic delicate, I would say that the Korean sense of beauty has a candid charm that knows to do away with the superfluous and embrace only the essence.

SM: How do you feel about how the hanbok is represented in western designs?

YK: I was deeply touched by Caroline Herrera (S/S 2011 RTW) and Karl Lagerfeld (2015/16 Cruise collection)’s hanbok interpretations. It is positive that these world-renowned designers were inspired by hanbok. I was a bit disappointed though that hanbok was used for its superficial image and codes rather than reinterpreted based on a deeper understanding, but their work allowed me to see how Westerners view and perceive hanbok.

With the development of the internet, Korean culture, spearheaded by K-pop, K-drama, and K-movies, has become increasingly popular on the global scene. I believe that hanbok has played its part as a representative icon of Korean culture. Today, many foreigners think of hanbok when they think about Korea. Hallyu (the Korean wave) has also contributed positively to raising the awareness of hanbok globally. Meanwhile, I find that those who show interest in Tchai Kim are more attracted by the brand's distinctive designs rather than follow the brand in the context of Hallyu.

Costume Society Ambassador Sarah Morgan is an aspiring costume historian and designer. Her undergraduate work culminated in a dissertation on the effects of the Black Plague on dress and social status. During Sarah’s postgraduate Fashion degree at Kingston University, London, Sarah worked in the university costume archive. 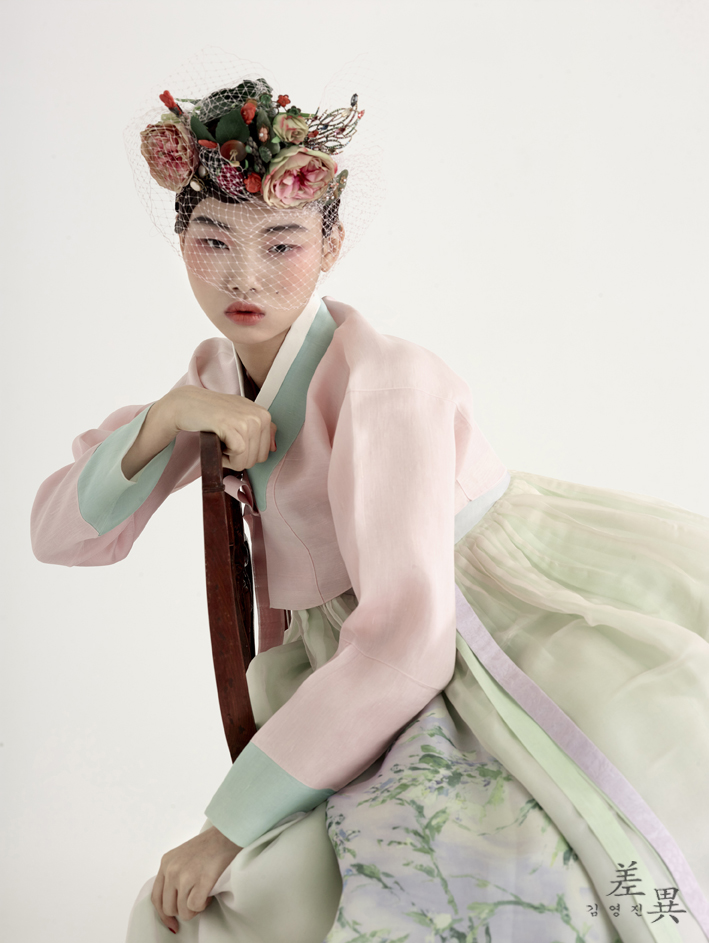 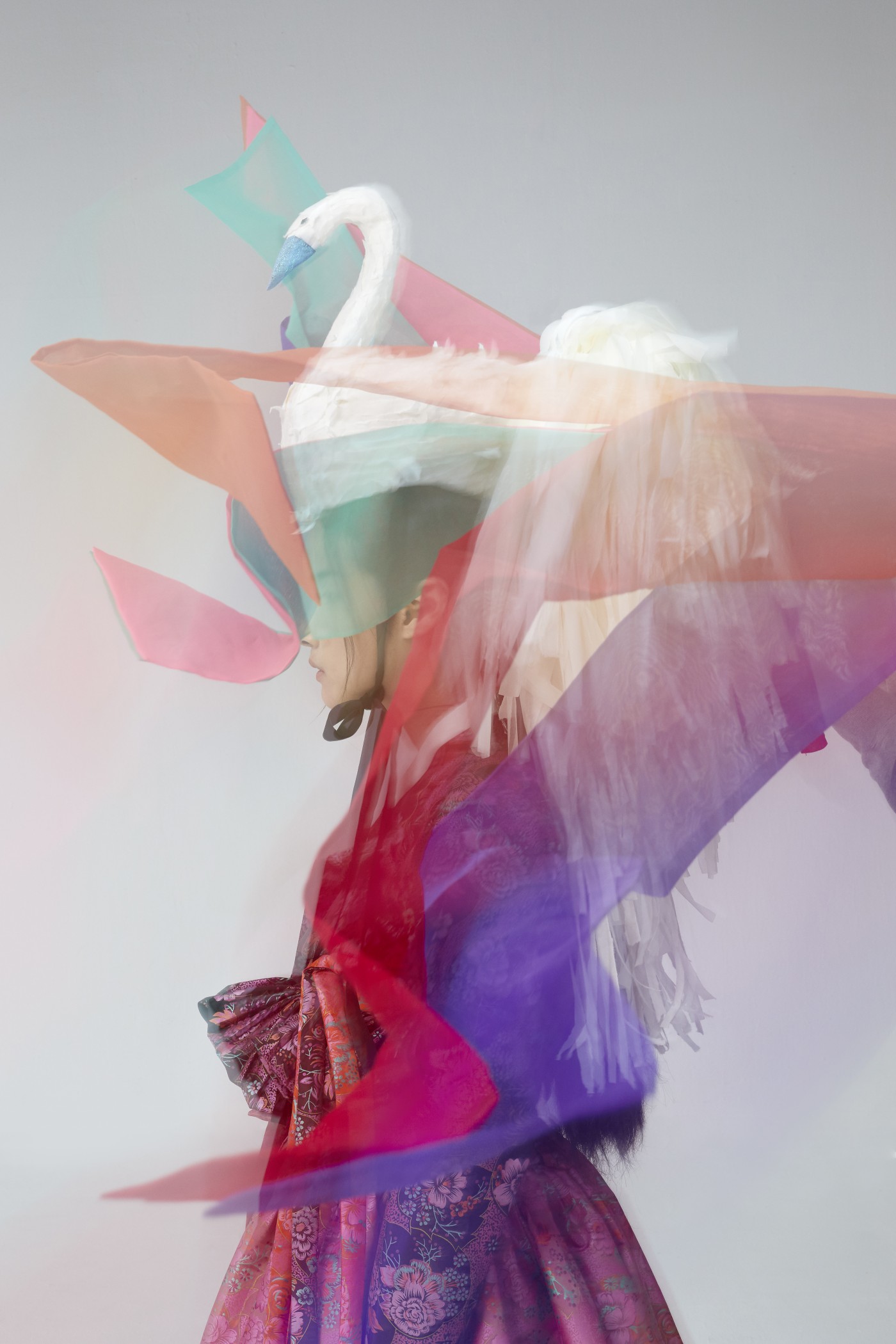 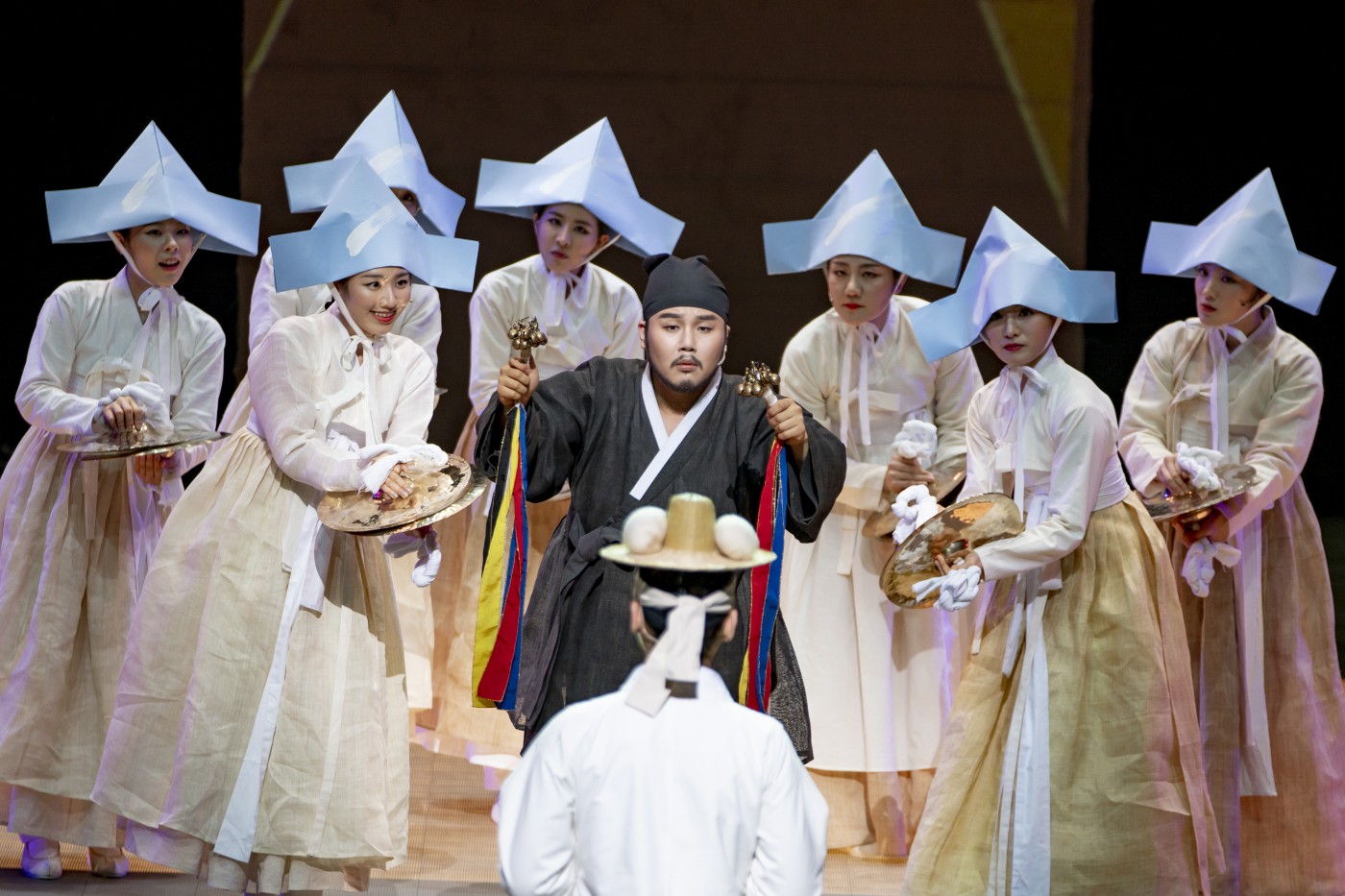