Guest Blog Month, 2021. Serendipity: A Case Study of a Muff

In our mid-week Guest Blog, Alison Larkin examines an 18th-century embroidered muff, exploring the availability of embroidery patterns, and the use of patterns in embellishing garments and accessories. 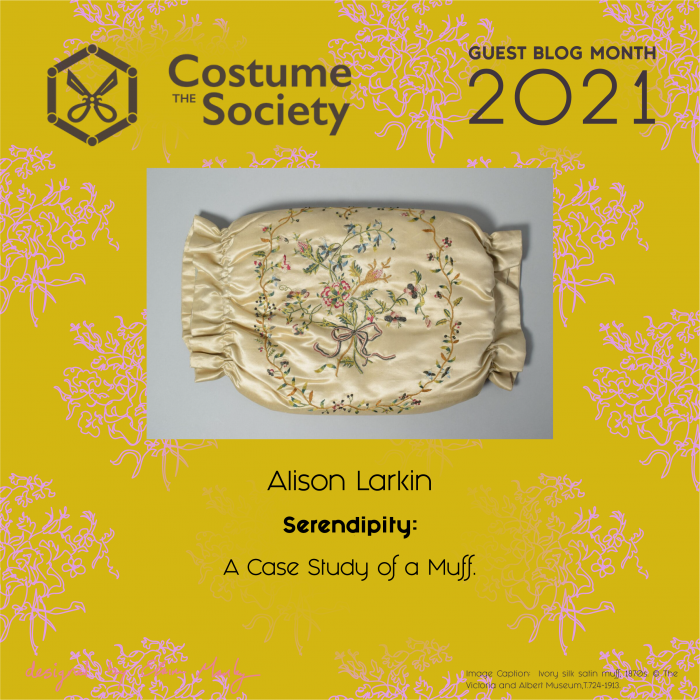 Over the course of the last three weeks, the contributors to our Guest Blog Month event have explored the relationship between clothing and paper, highlighting the power of papers sources in developing a further understanding of the history of clothes. As we head into our final week, we wish to thank our most recent contributors, Dr.Kimberly Alexander, Angela Lassig and Kimberly Lamm for sharing their research with us.

From written documents from18th and 19th century America and New Zealand, attention now shifts to fashion plates, sartorial cartoons and embroidery patterns. In our latest blog, embroiderer and author Alison Larkin explores an embroidered muff, the availability of embroidery patterns to the public, and their use to embellish garments and accessories.

‘Serendipity: the faculty of making happy and unexpected discoveries by accident’ [1]

It sometimes seems that my embroidery career has been largely based on serendipity, and the focus of this blog is just another example.  A Facebook post by The Costume Society on 6th April 2021 showed images of two muffs and a pottery handwarmer. One of the muffs was beautifully embroidered, dating from the 1790s, was from the V&A collection.  The style looked familiar – a posy of flowers tied with a ribbon, surrounded by a border of flowers and leaves. Very typical of patterns from the late 1700s. I have amassed a collection of embroidery patterns published in periodicals from the late 1700s to the early 1800s, in particular, The Lady’s Magazine. A rapid flip through my files hit the jackpot! The central motif is based on a pattern from January 1781. Various examples of these published patterns on extant items have been identified in the last few years, three of them from the V&A collection. However, this one is particularly interesting, as it is the first pattern identified with a change of suggested use.

The Lady’s Magazine; or Entertaining Companion for the Fair Sex, was published by G Robinson and Son from 1770 – 1832. It was a monthly periodical that covered a wide range of topics, from biography to travel writing, essays to poetry, recipes to fashions. It was also multi-media, in that it included fashion plates, illustrations, music, and embroidery patterns. The latter were one of its main selling points, as the whole monthly instalment cost half the price of a pattern at the haberdasher. They were published as line drawings, with occasional suggestions such as ‘to be worked in colours’, and no instructions. It was assumed that the readers of the magazine (mainly middle-class ladies or gentry) would be sufficiently experienced to work out stitches and colours for themselves. 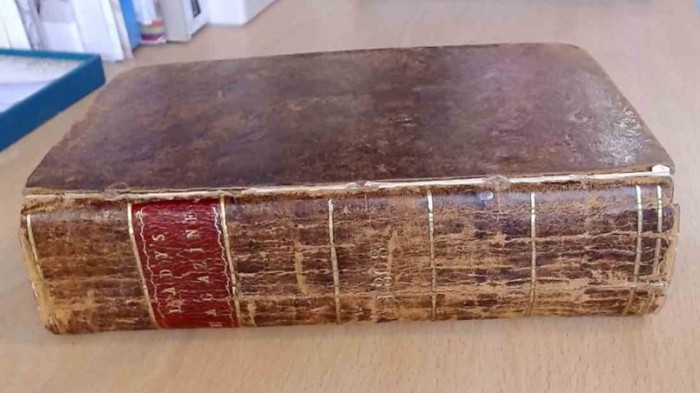 Figure 1:Bound copy of The Lady’s Magazine from 1808 from the author’s collection. The photo is the author's own.

These embroidery patterns were issued almost every month from 1770 to 1819. Until recently, they were mostly lost, as they were rarely included in the bound volumes in which the Magazine has survived to the present day (Figure 1) My co-author Prof Jennie Batchelor (University of Kent), had researched The Lady’s Magazine for quite a few years without seeing any of the patterns until a chance purchase of a half-year volume dating from 1796 in 2015 provided her with several patterns. These she posted online, and the subsequent attention from myself and others led to the Lady’s Magazine Stitch-Off and an exhibition of work based on the patterns at Chawton House in 2016. Serendipity again!

Further serendipity led to the discovery of digital copies of The Lady’s Magazine online and the realisation that, of all places, the Bavarian State Library in Munich has a set of the periodical dating from 1770-1804, with most of the patterns intact! A visit to Munich has now given us a fairly complete collection of the pre-1800 patterns. 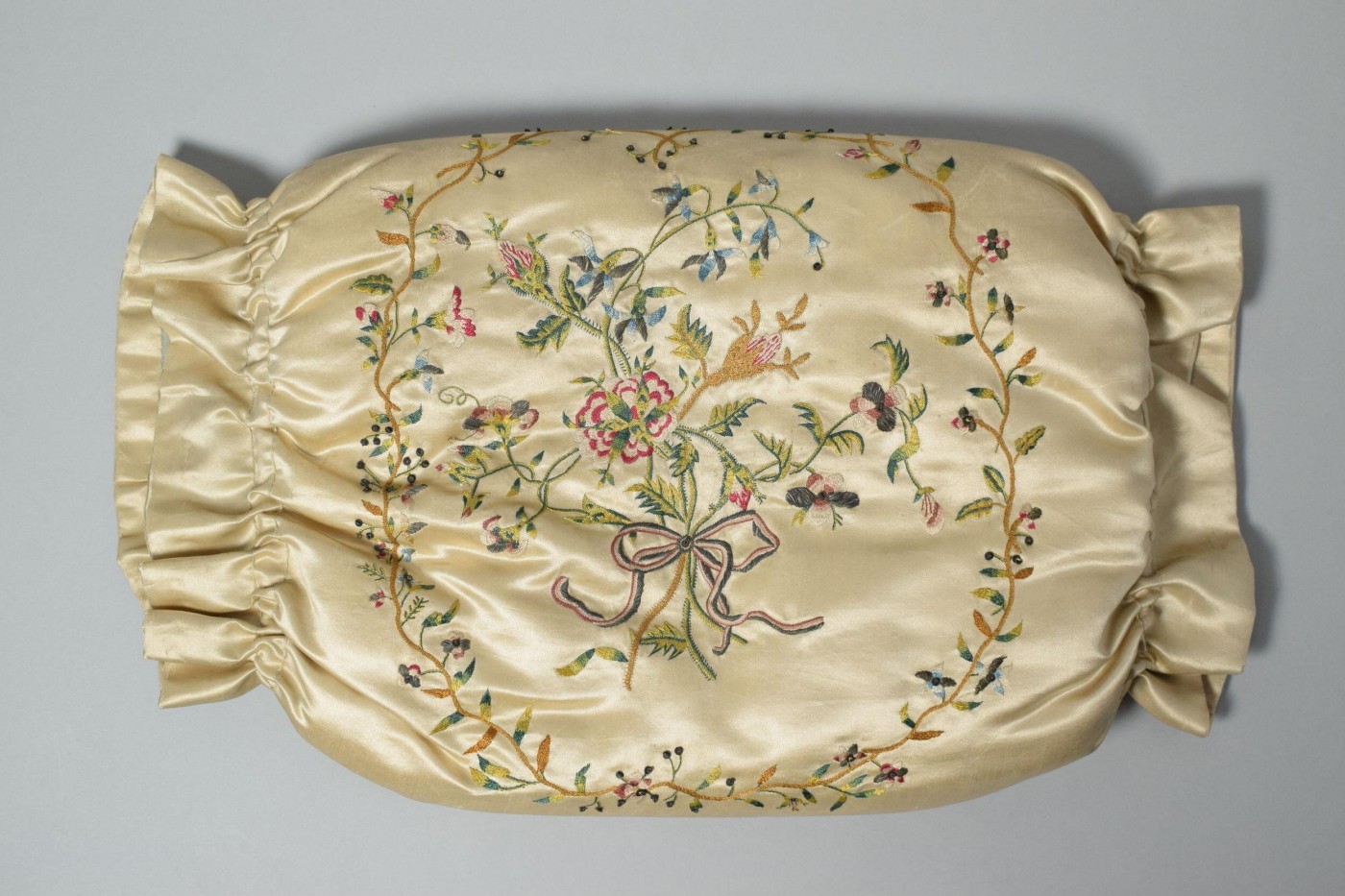 The Muff and the Pattern

The image shows the embroidered muff, dated 1790s (Figure 2) It is stitched with silk and silver thread on ivory silk satin, lined with blue silk sarsenet, and padded. Channels and cords at each side gather the ends and create ruffled openings for the hands. The style is typical of muffs of the period, as is the general style of the embroidery. Of the eleven muff patterns identified in The Lady’s Magazine, which date between 1775-1794, three are all-over patterns, two have swags with flowers and the other six are posies with a border surround. Apart from the all-over patterns, they are all what we would call landscape format. 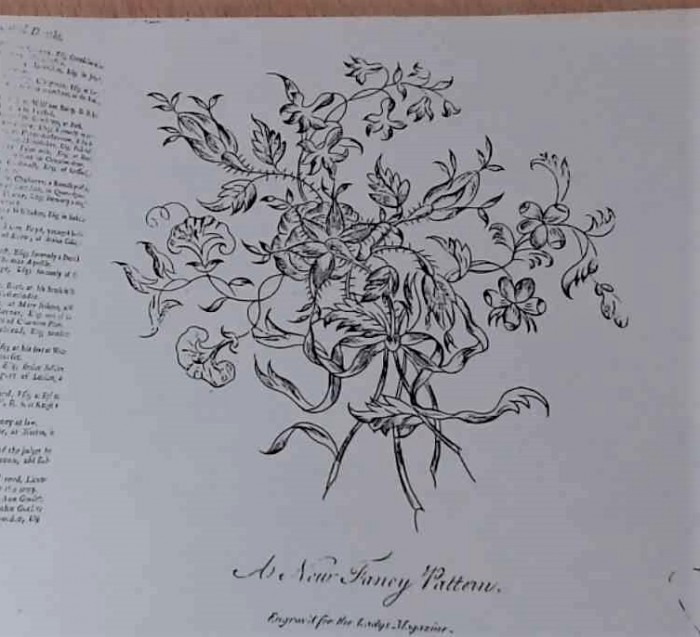 However, the actual pattern used here appears to be a composite of a different posy-style pattern with a separate border. The central motif is the ‘New Fancy Pattern’ published in January 1781.(Figure 3) This pattern is roughly 15cm square in shape, showing a posy of naturalistic flowers tied with a ribbon bow – a common motif in The Lady’s Magazine patterns of the time. The border pattern surrounding it cannot be identified in my pattern collection. This is the first time in the admittedly limited number of identified matches to Georgian patterns (four so far) that I have found a pattern used in a different context from the original proposed use: a ‘fancy pattern’ was probably intended as a picture.

The design is not an exact copy. All the pattern is present, but some of the parts of the pattern are more widely spaced than in the original. The bow and the leaves around it, for example, are spread out, and the pattern overall seems to be slightly larger than the original, estimating from the museum information (just over 3cm larger). This suggests that the pattern was copied by hand. If it had been directly traced, or transferred using the ‘prick-and-pounce’ method, the finished design should have been an exact match in both size and layout. The border design is fairly circular but is not regularly laid out. It has clusters of small flowers and berries, connected by a wavy line of stems and leaves, but there is little regularity of the order of motifs or the breaks in the stems. This suggests that it was drawn up by the embroiderer herself as a way of outlining the central motif, rather than taken from another pattern. Our stitcher wanted to embroider a muff and liked the posy from 1781, but it needed more to complete the overall ‘fashionable’ design.

Unfortunately, the downloaded image from the V&A website does not provide much detail. We can identify where the silver filé threads were used (what we would call ‘passing thread’ today), and the use of what I believe are spangles rather than sequins. However, the image is not detailed enough to be sure about the stitches used with the silk threads. A visit to Clothworkers Hall is the obvious next step. 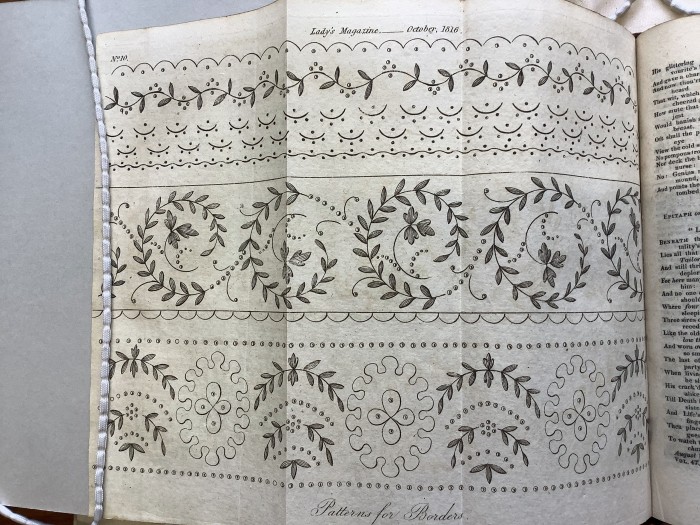 Figure 4: Example of a pattern from The Lady’s Magazine, published October 1816 from the author’s collection. The photograph is the author's own.

What can we learn (or speculate) from this lovely item? The embroiderer was a reader of The Lady’s Magazine and probably experienced in using the patterns. (Figure 4) These provided a wonderful resource for stitchers, especially if they had not got immediate access to a haberdasher. She was a skilled amateur embroiderer, probably upper-middle-class/lower gentry: a woman of higher rank or income would probably have bought a professionally embroidered piece. She had a level of design flair and confidence, to take a quite complex pattern and repurpose it, plus drawing her own matching border. She liked fashion and style and was able to design and stitch her own items to show off her skills and fashion expertise. Sadly, with little provenance, we are left to wonder who she was.

Formerly a Biology teacher in Further and Higher Education, Alison has been a full-time embroiderer since 2013. As a practising textile artist, she explores and teaches historical hand embroidery methods, and researches the designs and techniques used in extant pieces. Her main interest is the use of embroidery on costume throughout history, particularly during the Georgian period. Her current area of research is embroidery designs published, collected, and used during the late 18th and early 19th centuries. She has also written about historical embroidery techniques and co-authored Jane Austen Embroidery with Prof Jennie Batchelor in 2020.

To find out more about Alison's work, please visit https://alisonlarkinembroidery.com/