Just in time for St. Patrick's day, CS Ambassador Rachel Hynes takes an in-depth look at the Irish Mantle, and its many incarnations, from a literary perspective.

“The whole country figures in my mind like a ragged coat; one huge beggar’s gabardine, not patched, or patchable any longer” (1).
—Thomas Carlyle

Characteristically thinking through clothes, Thomas Carlyle likened the ravaged topographies of famine-torn Ireland to a bedraggled street urchin’s gabardine; amply capturing the profile of the nineteenth-century Irish Frankenstein, the cloaked Hibernian monster-emigrant who stalked both the pages of Victorian Punch and the congested wharves of Britain’s shipping ports. Carlyle was not alone in thinking about characteristics of Irishness through overcoats and mantles. Edmund Spenser—writing three centuries earlier—suggested that the mantles worn by Irish women were, in reality, deceptive coverlets for prostitutes, wrappers used, more specifically, for “swaddling bastards” (2). By 1620, Luke Gernon wrote of how the Irish resembled the English in dress, with the exception of their idiosyncratic mantle. As Irish dress historian Mairead Dunlevy has pointed out, the design of principal outerwear garments (such as our contemporary version of the coat) developed from medieval gowns, and, thereafter, was inspired by the French and English courts of the seventeenth century (3). By the mid-to late-nineteenth century, the English man’s coat had become a tightly drawn formative and architectural garment; associated with the working world, hierarchy, and the exactitudes and precision of cut and tailoring. The Irish ‘coat’, however, materialises a less linear and seamless trajectory in material history, particularly when read through literary sources of the nineteenth and twentieth century. In fact, cultural representations of Irishness were frequently mediated through one garment in particular; the unstable Irish mantle. From cloaks to shawls and trench coats, the Irish mantle becomes a vector of instability and degeneration, embodies the terrorism and political upheaval of the Irish Revolutionary Period, and poeticises the unjust plight of the exiled emigrant at sea.

The Irish Shawl:
Evolving from the Kashmir shawl in the 19th century, images and ephemera of the ‘ould plaid’ Irish shawl have become a locale for articulating folk dress traditions and the ‘homely’ narratives and domestic practices of Ireland’s rich textile history. Consequently, any discussion of the ‘Irish shawl’ invariably constellates around representations of maidenhood, maternity and rustic innocence. Best exemplifying this complex material nexus of puritanical Irish femininity is the potently romanticised 1927 portrait of Lady Hazel Lavery as Kathleen Ni Houlihan, the goddess of Irish nationalism (figure 2). Draped soberly in black shawl whilst reclining upon a harp, Lavery is the maiden Erin, the female face of a new state. In the British popular imagination, the Irish shawl was a discrepant garment, simultaneously garbing drunken, thieving Irish women in the furthest reaches of London’s Victorian slums, while also illustrating the privations of the starving rural mother in British press coverage of the Great Famine (1845-1849).  In literature of the period, however, the shawl is a far more motley garment. It is the shawlies of Joyce’s Ulysses (1922) —those fisherwomen and street hawkers of the patchwork streets of 1904 Dublin—who give the Hibernian capital its unmistakable colour and sexual licensure while in Synge’s 1907 The Playboy of the Western World, women’s clothing from ‘shifts’ to ‘shawls’ signals the inversion of traditional gender roles. A more dynamic lens through which to read the Irish shawl (in particular the famous ‘Galway Shawl’) comes to us from the Clonbrock Photographic Collection held at the National Library of Ireland. The image shows Mrs Heany (presumably a local female workhand of the Clonbrock estate) in a state of undress, her fringed tartan shawl on the ground beside her (figure 3). Through Mrs Heany’s pensive divestment and the loose, rippled shapes of the discarded shawl, we are at once reminded of both the practical necessities and the gendered and social divisions associated with the Irish mantle.

The Mackintosh:
Though worn by a strange character called ‘M’Intosh’ in Joyce’s Ulysses, much remains to be said about the mackintosh or trench coat’s Irish association with ‘the shadow of the gunman’(figure 4). As recent scholarship has noted, the mackintosh or trench coat has become a sartorial symbol of twentieth-century warfare and upheaval, particularly within studies of the material culture and history of the First World War. Inextricable, too, from popular representations of the twentieth-century IRA insurgent/terrorist, the mackintosh/trench coat is frequently cited as standardised IRA ‘uniform’ in Irish and British newspaper coverage of the Irish War of Independence (1919-1921). Highly idealised, and mythmaking, the trench coat, with its rubber sheen, waist cinching belt, and stiffened collar, assumes a dangerous Hollywood glamour in photographs, newspaper reports and literature of the period (figure 5). In Brendan Behan’s autobiographical 1958 novel Borstal Boy, a coming-of-age novel about a fervent Irish republican, two characters from the novel neatly explain the dangers and vicissitudes of the Irish mantle discussed in this post: “Joe looked older and stylish in his own clothes and feeling the cloth of his sleeve said to me, ‘Good bit of cloth this Paddy’, and when I agreed that it was, he praised my trench coat, ‘That’s a real IRA gunman’s coat, Paddy, like what you’d see Victor McLagen wearing on the pictures” (4). 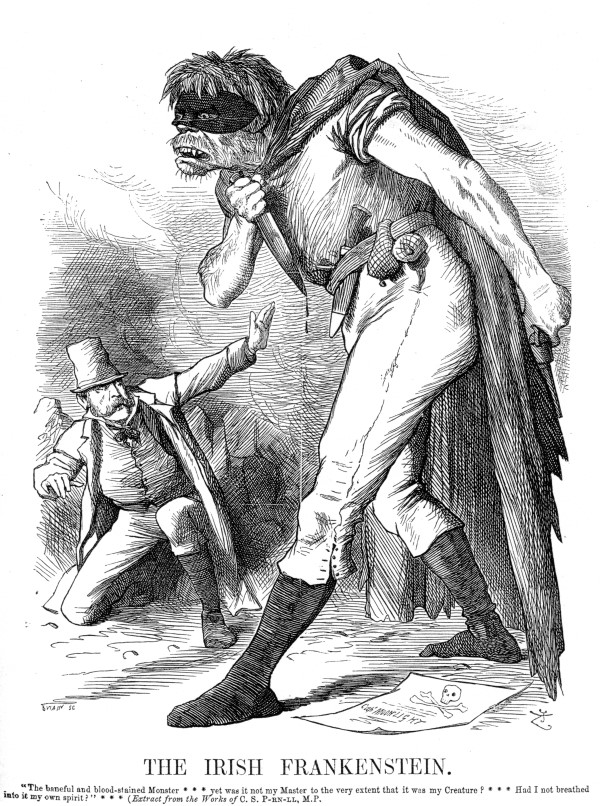 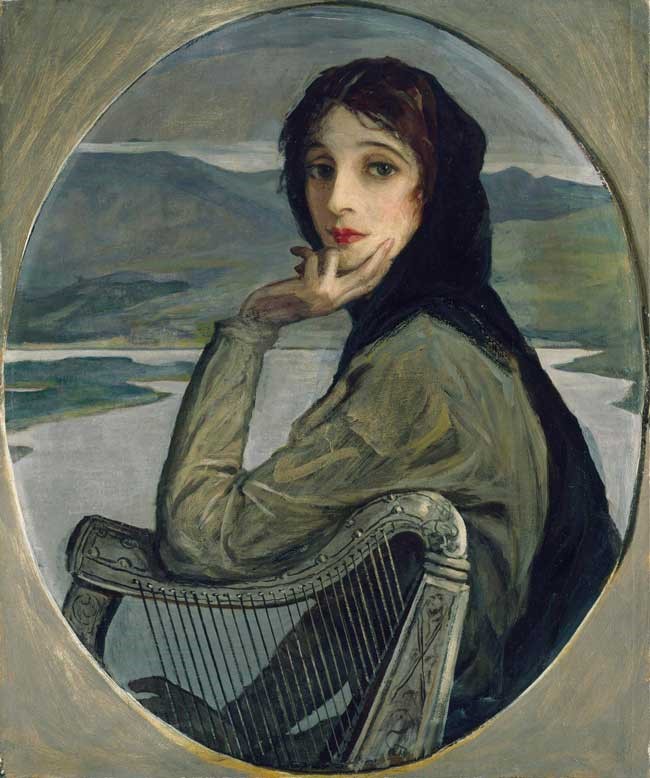 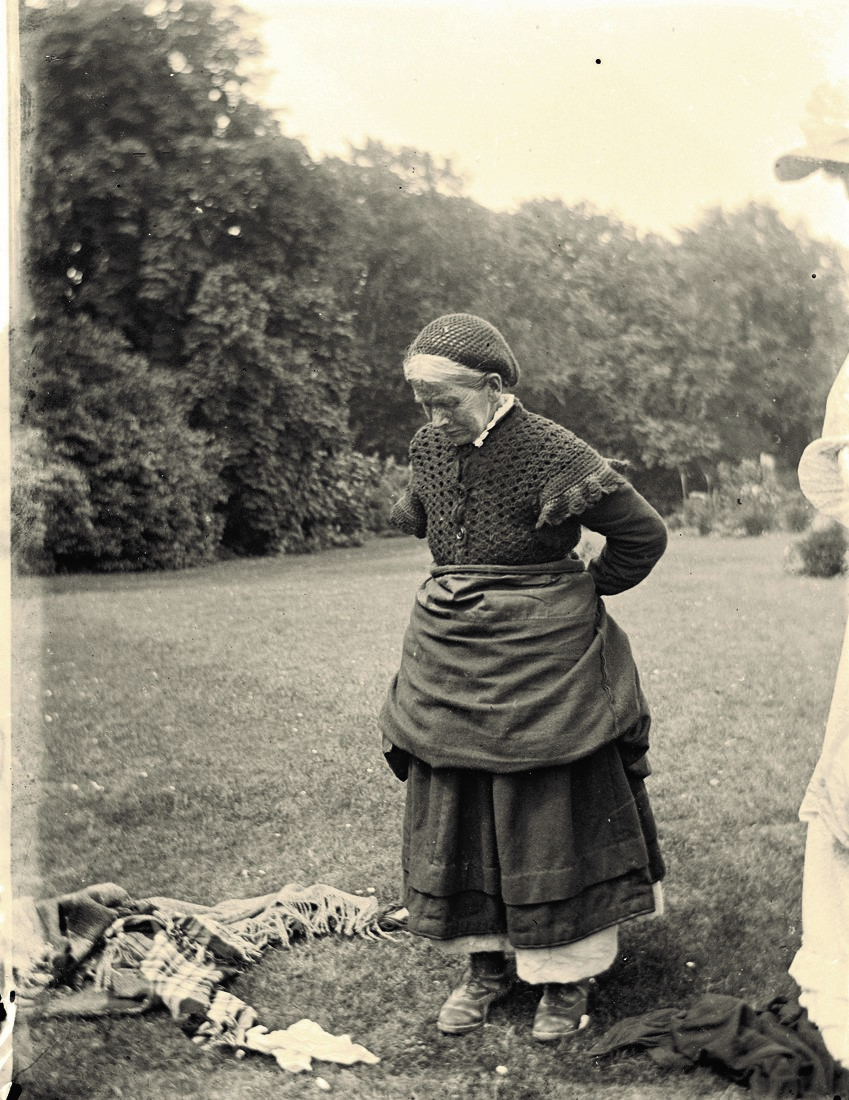 3. Mrs Heany, c. 1904. Elderly woman identified as Mrs Heany wearing a crotchet cap hoisting her skirt up slightly, whilst a shawl is lying 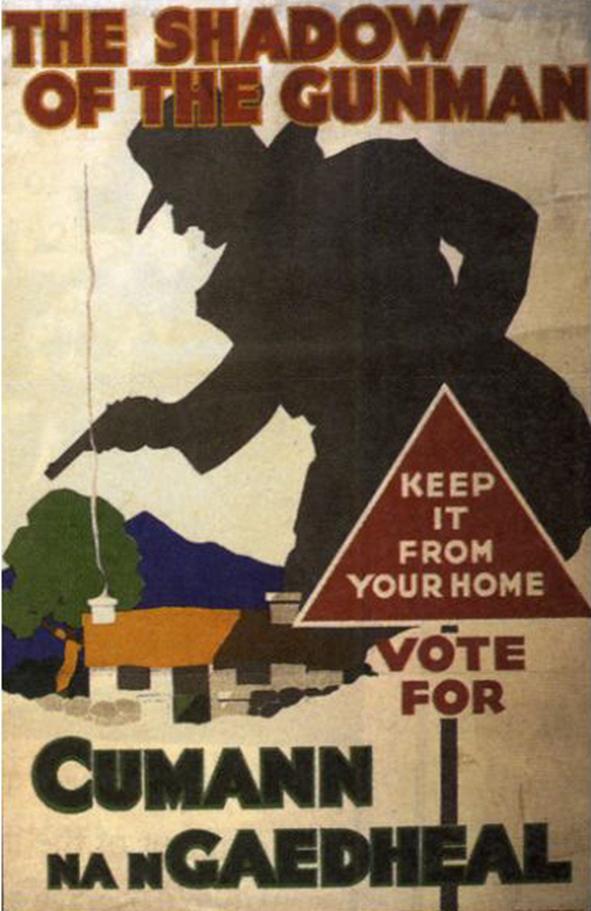 4. ‘The Shadow of the Gunman: Keep it from your Home! Vote Cumann na nGaedheal (1932). Image courtesy of the National Library of Ireland. 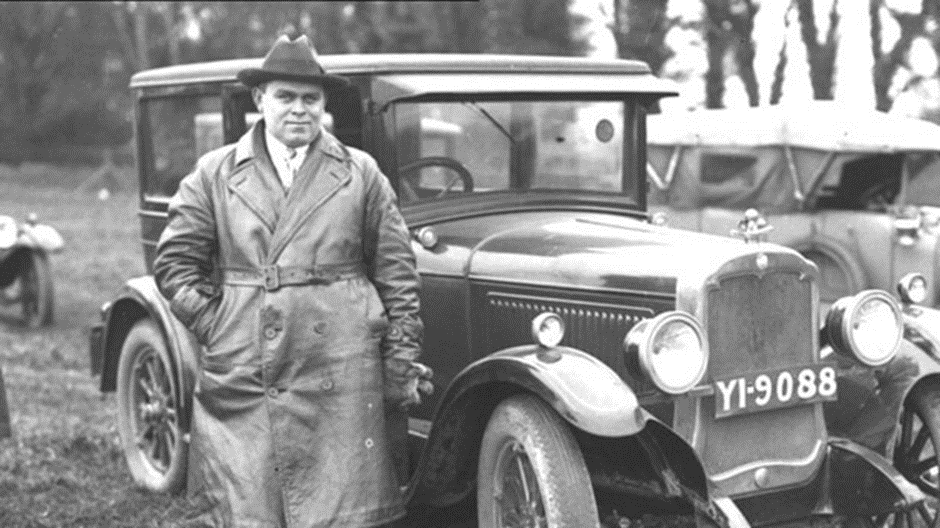