In this week’s blog, costume textiles aficionado Hannah Marples offers an in-depth look at two striking portraits at The Portland Collection & Harley Gallery, Welbeck, where she works as a Gallery Coordinator.

The Portland Collection’s current exhibition ‘Men, Women and Things: A World of Worlds’ (14 September 2019 – 31 December 2021) focuses on the inspiring women in the family’s ancestry including the first female sci-fi writer and one of history’s greatest natural historians. The Portland Collection is a museum on the Welbeck estates in North Nottinghamshire that exhibits items from the family’s collection. The extensive collection was developed over 400 years ago by an extended English aristocratic family, which descended from Bess of Hardwick. The collection offers an astonishing selection of fine art and objects, which range from ancient Roman gems to the pearl earring that Charles I wore at his beheading, and artists on show include Sir Anthony Van Dyck, Michelangelo, John Singer Sargent, and George Stubbs.

The first pair of portraits you see as you walk into ‘Men, Women and Things’ is William Cavendish, 1st Duke of Newcastle painted in 1636 by Anthony Van Dyck and his second wife Margaret Lucas, 1st Duchess of Newcastle by Peter Lely (1665). As I work for the private collection I enjoy questioning the hidden meanings and insights of clothing in portraiture.

William Cavendish (1593-1676) was the grandson of Bess of Hardwick and a royalist cavalier. He owned several estates including Bolsover Castle but mainly resided at Welbeck Abbey. In this portrait by Van Dyck, you can see the wealth and his status clearly, not only because he is wearing his Garter Star and sash to display his wealth, but also in the clothes he is wearing and the brocade textiles surrounding him. Interestingly, this painting, in particular, has been modified; when it was originally painted, William Cavendish could be seen in a red sash, as he was at this stage the Order of Bath. When he was made a Knight of the Garter this portrait was then edited to show a blue sash and his Garter Star on his shoulder. Currently, the sash looks much like “changeable” or “shot” silk and it is interesting to note where the colours of old and new have merged over the centuries. 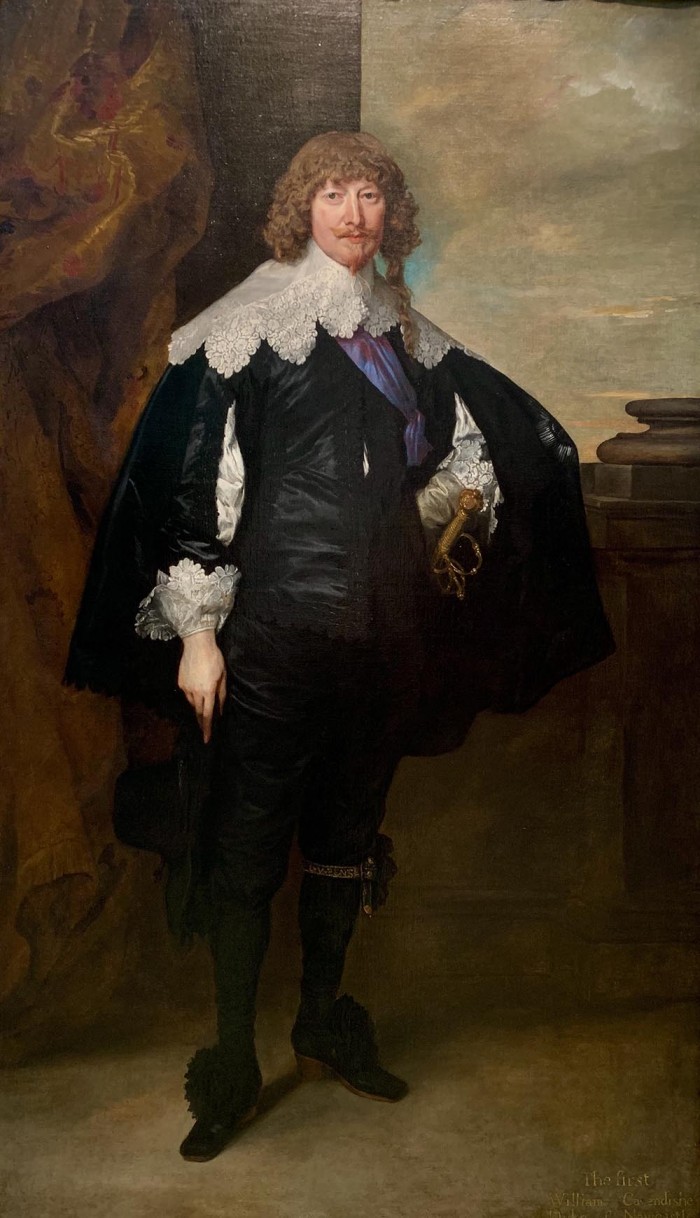 His doublet and matching breeches appear to be black silk taffeta. They are incredibly fashionable for the period as the high waistline of his doublet sits at his natural waistline and the skirts cascade down over the breeches; no doubt to hide a lacing strip and points that lace the breeches to the doublet to secure the two garments together. The sleeves of William’s doublet are depicted with the central seam largely open to show off the drapery of linen of the shirt underneath. The cuffs and falling band collar are also decorated with very deep lace to add even more frill and decadence. All seams and hems of the doublet are trimmed with black lace to add more lustre to the relatively plain garment. One can assume that the silks used in this particular outfit are possibly English; it was common practice to decorate plain English silk garments with thin lace ribbon and trim sourced from local suppliers to distract from the slightly poorer quality, especially in comparison to highly luxurious Italian silks.

The colour of the outfit is significant; black was a display of expense and wealth. Black clothing also signified that the wearer belonged to the inner circle of Charles I, which of course the royalist cavalier was, famously spending £40,000 on a weekend-long party at Bolsover Castle for Charles I! William Cavendish also became a tutor to Charles II and taught him how to ride a horse.

The stockings that William wears are really intriguing. Van Dyck is often credited as the first artist to paint creases into stockings instead of artistically manipulating the curvature of men's calves in stockings to appear quite bulbous. It is really lovely to see the creases and folds around the ankles, compared to the usually perfectly smooth calf that one is so used to seeing from the early seventeenth century and centuries prior.

To the right of William Cavendish’s portrait is a portrait of his second wife Margaret Lucas by Sir Peter Lely. The Cavendishes met under the exiled French court of Queen Henrietta Maria, and Margaret was 30 years younger than William. Margaret, or as she became known, “Mad Madge”, was seen as eccentric and designed her own clothes. She was credited as the first female sci-fi writer and also wrote poetry, philosophy, and plays. Samuel Pepys would often record her visits to court in his diary, commenting on her dress as she would usually wear gowns exposing her breasts, and wearing patches across her chest and face to hide scars and blemishes. Pepys looked on in disbelief as Margaret’s footmen wore coordinating outfits to match Margaret, even wearing velvet which was seemingly shocking to the likes of Samuel Pepys. 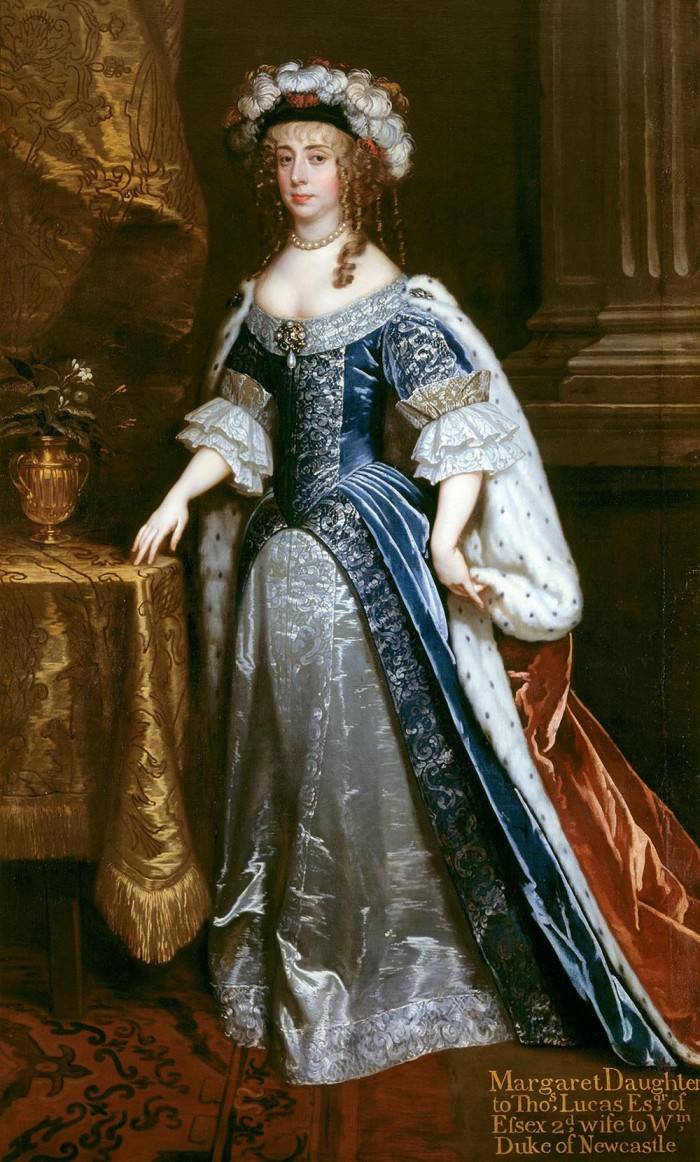 This portrait of Margaret shows her in court robes because the painting celebrates the Dukedom of her husband, William. In 1665 this outfit looks very reminiscent of the styles and trends throughout the Tudor period; the elongated bodice and waistline come to a point but are paired with the relatively trendy scooping neckline. She wears her velvet robes with fur lining and ermine tails; the ermine tails represent her high social status. Lace is appliquéd to her gown and petticoat and appears to be made of silver threads to give extra lustre to her wealthy appearance. Her petticoat is underneath an open-front gown skirt and it also appears to be cloth of silver. The sweeps of the brush strokes mimic how silver garments caught the light.

Margaret Lucas cannot be discussed without pointing out her hat. Recorded in many accounts, she often wore a velvet black cap adorned with decorative dyed ostrich feathers. The style was reminiscent of philosophers’ hats that were often worn by men during this time. Margaret was certainly making a statement by choosing this garment and it speaks to her role as a philosopher, a great writer, and researcher.

William Cavendish, Margaret Lucas, and their sumptuous outfits clearly demonstrate how a picture really can paint a thousand words. 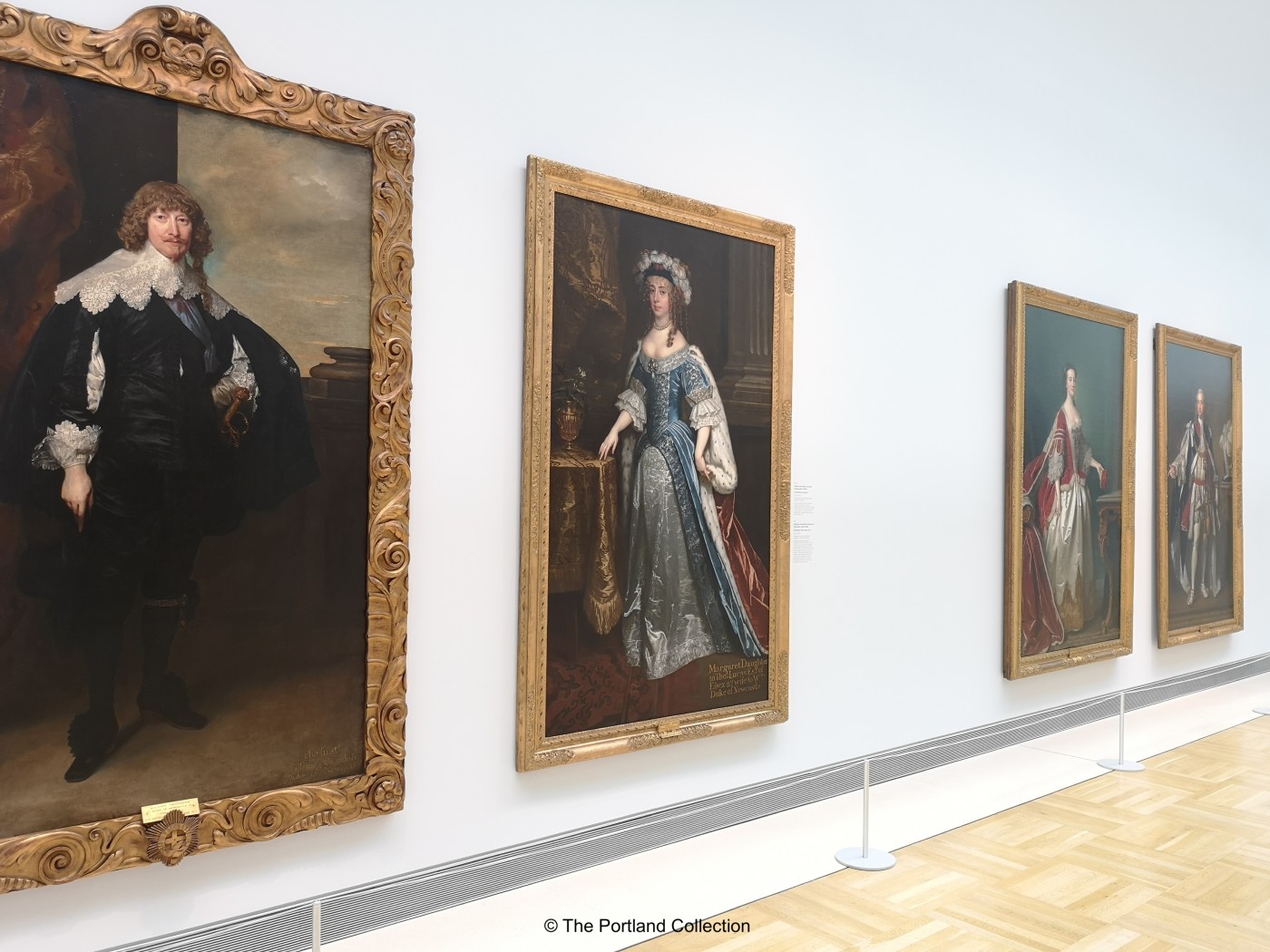