The Autumn 1957 issue of Sir had exciting news for its readers.

René Gruau, possibly the most famous fashion illustrator in the world at the time, had joined the editorial staff to present quarterly visions of his take on current menswear trends. Also, Sir revealed, the Italian aristocrat artist, who was based mainly in France, was to collaborate with Christian Dior, definitely the most famous fashion designer of the era, on menswear. “Gruau in future will design and supervise the production of Dior’s men’s fashion department. This sensational, creative cooperation will set up an entirely new and forceful source of inspiration in the men’s fashion field,” stated the magazine, which described itself as the “men’s international fashion journal”.

Alas, Dior died in Italy on 24 October 1957, soon after the issue appeared so the Gruau-Dior menswear alliance never achieved its potential but the link with Sir was much more fruitful. More than 20 years later, Gruau’s enchanting sketches of the latest trends were still given prominence in Sir and his evocative full-colour covers graced the magazine. It is an indication of Sir’s worldwide influence that Gruau – who was born Renato Zavagli Ricciardelli delle Caminate in Rimini, Italy, on 4 February 1909 – worked so closely with the title for so long.

Yet, more than 35 years after its closure, very few people in the contemporary menswear world have heard of Sir. 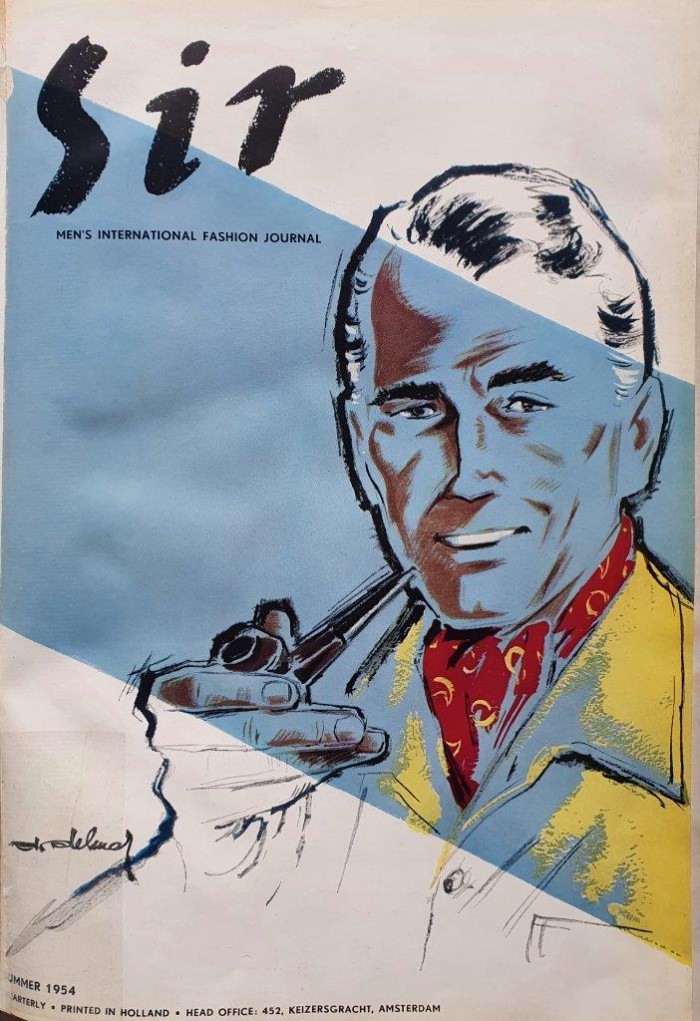 Sir 1954 2 Summer: An elegant and evocative cover by illustrator Alexis Delmar, who had many fashion clients in the 1950s. He was Sir’s main illustrator before René Gruau.

The connection with Gruau is usually the only point of connection, which is disappointing as Sir was one of the most important trade publications of the post-WW2 era, a period of colossal change for the worldwide menswear industry. The last issue of Sir appeared in 1986, the year I moved to Amsterdam to work as deputy editor on International Textiles, Sir’s much better-known “big sister” publication. Having been writing about the fashion business since 1980 and specialising in menswear since 1982, I had been an occasional contributor of trade fair reports to Sir before I relocated to the Netherlands.

International Textiles, or IT as it is often called, was established in Amsterdam in 1933 by Ludwig Katz, a Jewish émigré from Hitler’s Germany. It achieved a unique reputation for taking a comprehensive and coordinated look at the European textile and clothing industry, which at the time was huge and varied. (IT survived until around 2000 although its best days were long behind it by then). Gruau began to produce cover images for IT in 1948. As European commerce recovered after the Second World War Katz added two more titles to his group – Sir, and Interior for the home furnishings sector. IT was a monthly, Sir appeared four times a year and Interior three times.

There seems to be precious little about Sir online and I have been unable to discover when the first issue appeared, although I suspect it was 1950. I would be delighted if anyone can enlighten me. Sitting in my own library are almost 25 years of Sir, from 1954 to 1979. Annoyingly, the volumes for 1959 and 1960 are missing but I still have 90-plus issues to enjoy. As the publisher described it in the mid-1950s: “Sir appears at the beginning of each of the four seasons. Each issue gives a comprehensive survey of the man’s world, man’s styles, formal and sportswear.” In another issue it stated: “Sir is a guide through the world’s style news, a link between the important centres that work on men’s apparel; a constant source of new ideas.” 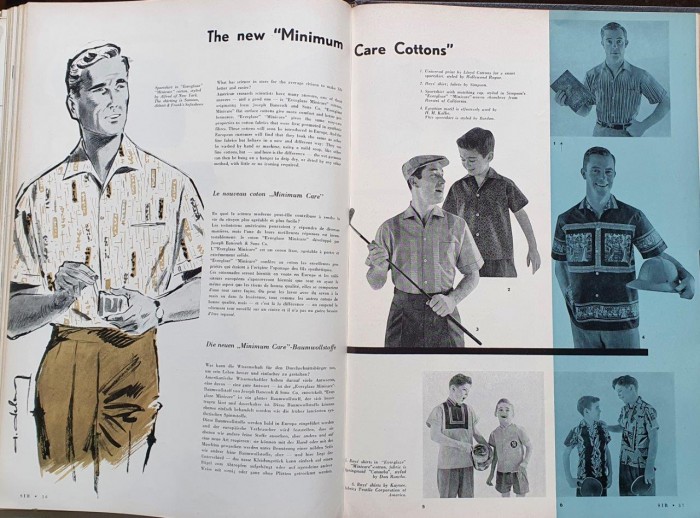 Unlike national trade titles such as Men’s Wear in the United Kingdom, which in 1902 was spun out of The Drapers’ Record (founded 1887), Sir always had an international vision, which freed it from any patriotic bias. It was a visual magazine with relatively little copy because all the text was printed in English, French and German on the page. The most important texts were also translated into Italian, Spanish and Dutch and printed at the back of the book.

Sir’s interest in men’s fashion consistently began with cloth. Pages after pages were devoted to flat shots of the fabric stories of the season. Bizarrely to our modern eyes, most of the trend direction spreads were printed in black and white, even up until the late 1970s, such was the cost of colour printing until the 1980s. Up until the mid-1960s, for its ideas for finished clothes Sir gave prominence to the work of leading bespoke tailors from London, Paris and Rome in particular, although others from lesser menswear capitals were included.

What is most interesting for the menswear historian is Sir’s unique coverage of ready-to-wear styles from dozens and dozens of companies, including major brands that are still with us and long-forgotten firms from countries as far apart as Sweden and Spain, Finland and the Netherlands. Before Gruau arrived in 1957 to become its main illustrator, Sir used significant commercial artists of the day, notably Alexis Delmar, a Hungarian living in Paris, and Arne Carlson, of whom I have found few details. Their fine work, in which a few strokes of the brush or pen create a powerful impression, reminds us that fashion illustration is almost a lost art these days. From the earliest issues I own, their drawings and illustrations were augmented by press photographs from manufacturers well-known and less well-known.

Katz, who died on 19 January 1964 aged 77, ran the International Textiles Publishing Company as a very commercial operation. The issues of Sir are packed with advertisements, which are another treasure trove for the menswear historian. 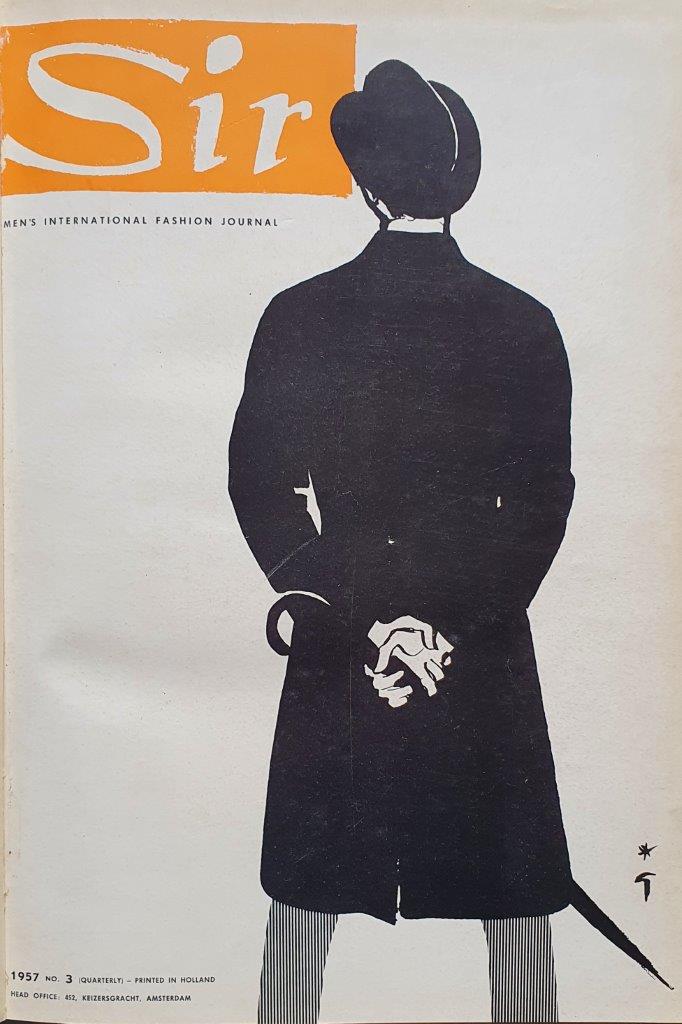 Sir 1957 3 Autumn 1st René Gruau cover: The first Sir cover from the great illustrator René Gruau, showing his strong and simple style. He collaborated with Sir until its closure in 1986.

Among its many services the group had a photographic studio and so produced advertising campaigns for clients. In its pages you can spot which shoots were done in-house as different brands from different countries are featured on the same model or models. The target groups for the magazine stretched from yarn producers to weavers and knitters, via the chemical companies behind the synthetics book of the 1950s and 60s. It appealed to menswear producers from bespoke tailors to industrial manufacturers. And it also was a unique reference publication for retail buyers who wanted to be informed of international trends.

Unsurprisingly the 1960s were the boom time for Sir. Its four issues a year amounted to well over 500 pages in total even though the magazine was always spiral-bound on wire, perhaps to suggest a workbook. It was an impressive production being almost A3 in size until 1976 when it slimmed to around A4. For an example of its approach, the Winter 1968 edition hit 176 pages, with about one third being advertisements, including eight pages from the Italian Foreign Trade Ministry promoting the nation’s cloth and clothing producers, and 24 pages for Koratron, an American permanent press treatment.

Across four pages and unusually using no colour on the black and white sketches, Gruau’s wardrobe for 1969/70 declared: “Broad square shoulders demand imposing collars and lapels- Fur and velvet for d.b.coats”. The 13th World Congress of Master Tailors, which had been held in Tel Aviv, was given four pages of monochrome coverage, while the XVIIth annual Festival della Moda Maschile, which attracted more than 1,000 Italian tailors to San Remo, was covered across seven pages and 24 B&W photos. Ready-to-wear menswear – suits and outerwear in Sir’s vocabulary – was allotted 30 pages, which involved more than 90 press shots, most printed monochrome. Spring 1969 shirts - formal and casual, woven and knitted - had 14 pages of coverage, while men’s beachwear merited 13 photos across three pages. Short but pertinent reports from the recent season’s main trade fairs were also included. Sir’s coverage was exhaustive to say the least. 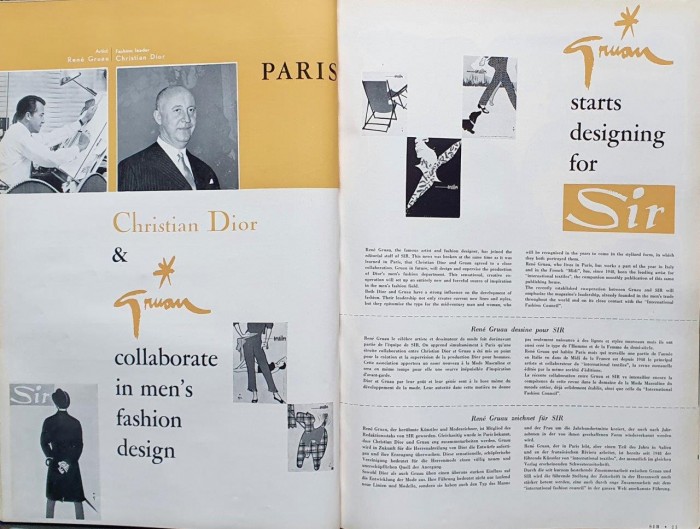 As was the publishing tradition at the time, no staff member’s name was given in the publication, so I do not know who was editing the magazine until it had something of a relaunch in summer 1979. I believe London-based Denis Hayes, who was a sometime designer and journalist and a menswear lecturer at the Royal College of Art, took control. He commissioned me to provide some reports in the mid-1980s.

By 1975 an annual subscription to Sir was £14, which equates to around £125 today, so this was a premium B2B title. Sir’s potency waned from the early 1970s, however. The conservative editorial message always took the stance that change was good and necessary, but men’s fashions had to remain commercial if mills and clothing manufacturers were to stay in business. It never really embraced the jeanswear and casualwear revolution of the later 1960s.

By the mid-1970s the menswear industry was a much more varied, international and sophisticated arena than it had been in the early 1950s. Other sources of information, such as professional trend agencies, offered a more targeted service to large companies than Sir could. For 20 years from the mid-1950s, however, Sir was unique in taking an international view of menswear. More people ought to know about it but locating copies is a challenge. If anyone can let me have the issues from 1959 and 1960, please let me know.

Eric Musgrave is the author of “Sharp Suits”, a photographic history of men’s tailoring. As editor of Drapers, he was twice named UK Business Media Editor of the Year, in 2003 and 2015. Many examples of his work since 1980 can be found on his website. His Instagram feed is @musgraveeric 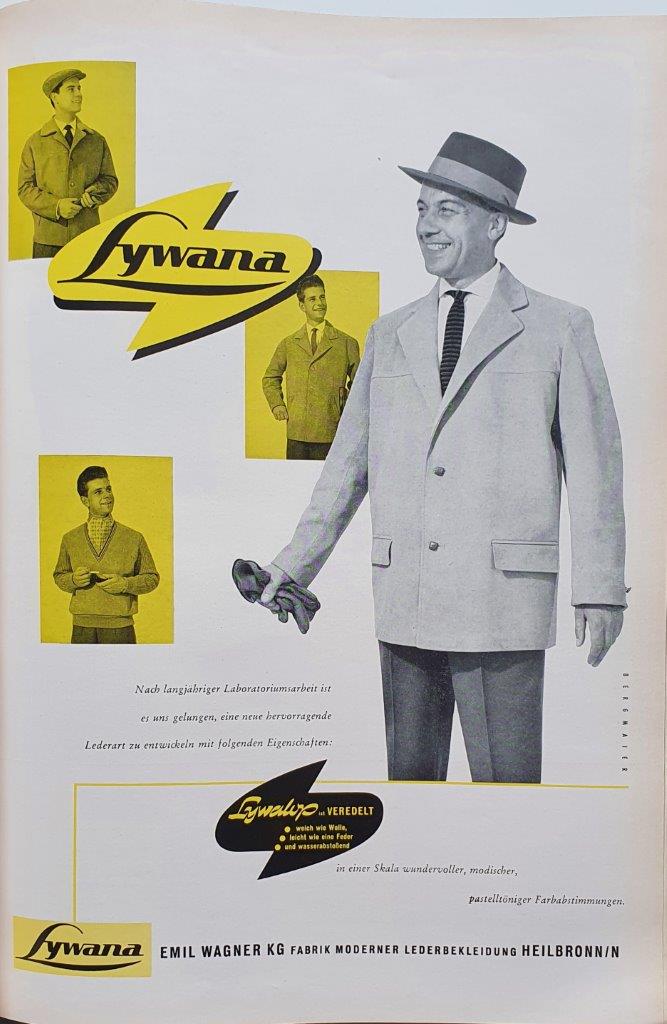 Sir is full of superb advertisements that catalogue the development of the marketing of menswear. Some manufacturers’ brands are long-forgotten… 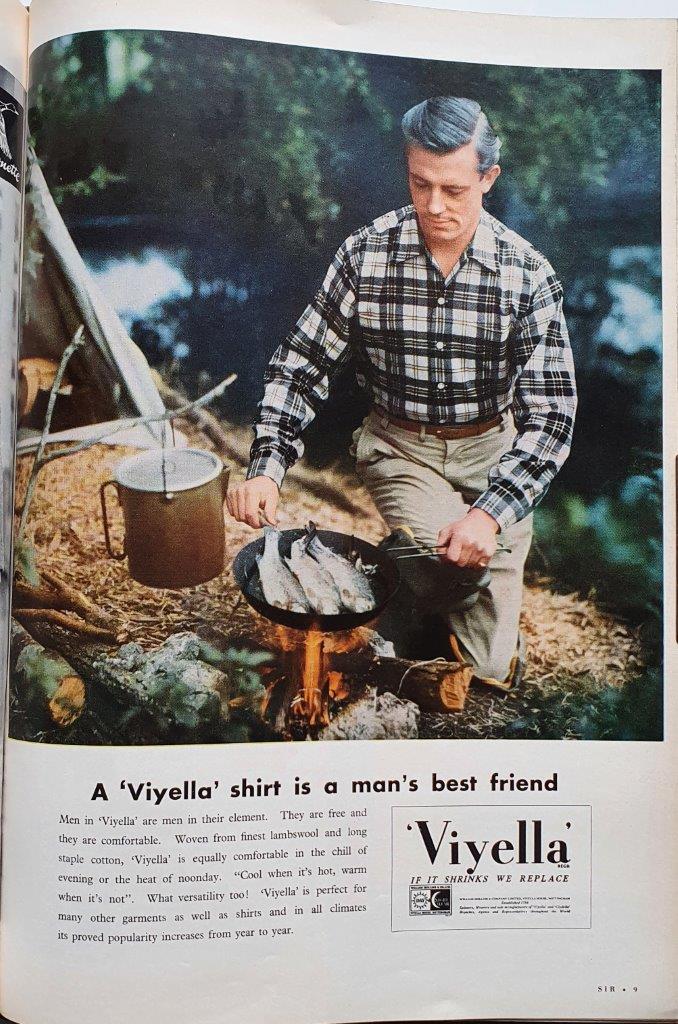 …others had an international reputation. 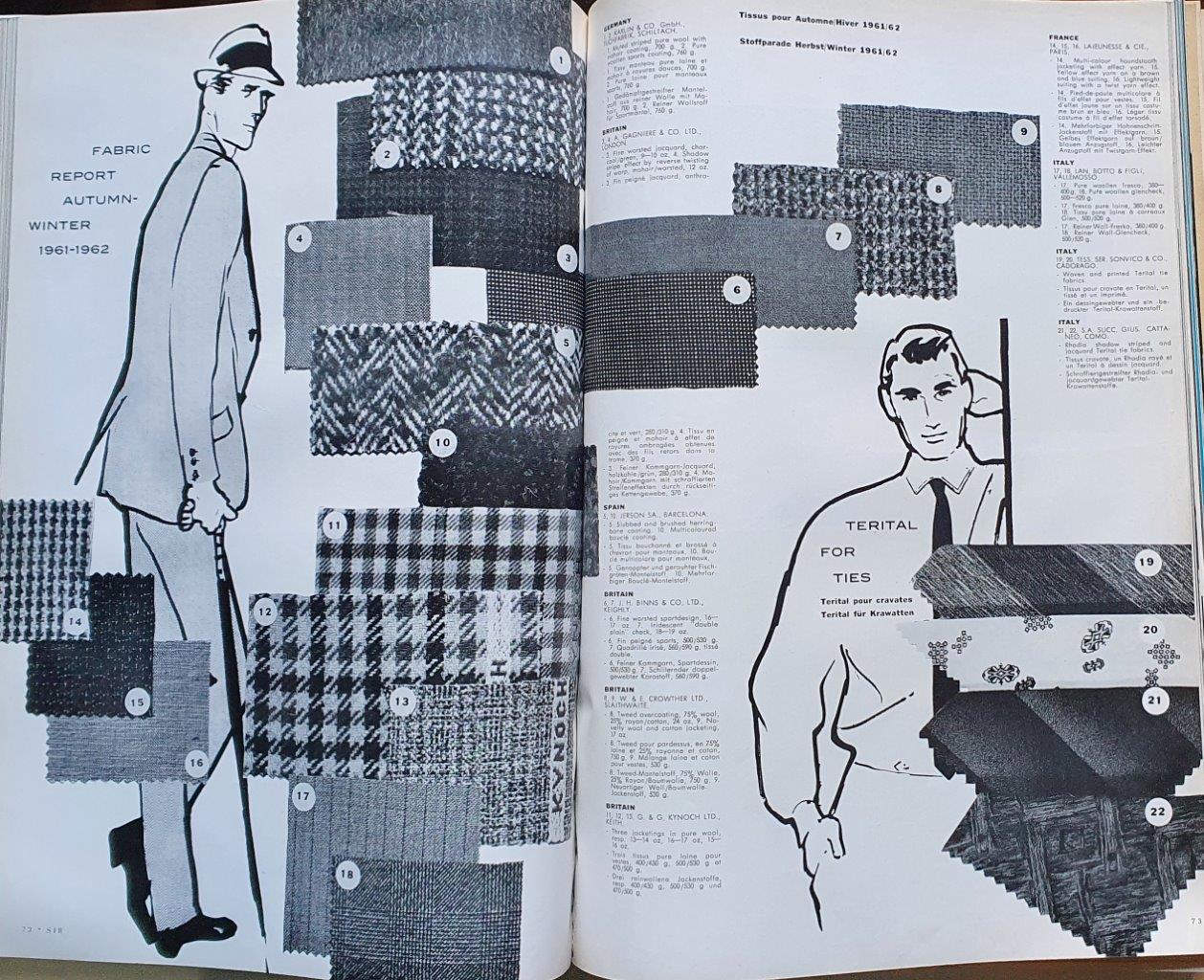 To modern eyes it is remarkable that most of Sir’s fashion and trend information was rendered in monochrome throughout its existence but that was normal publishing practice, certainly in trade magazines. 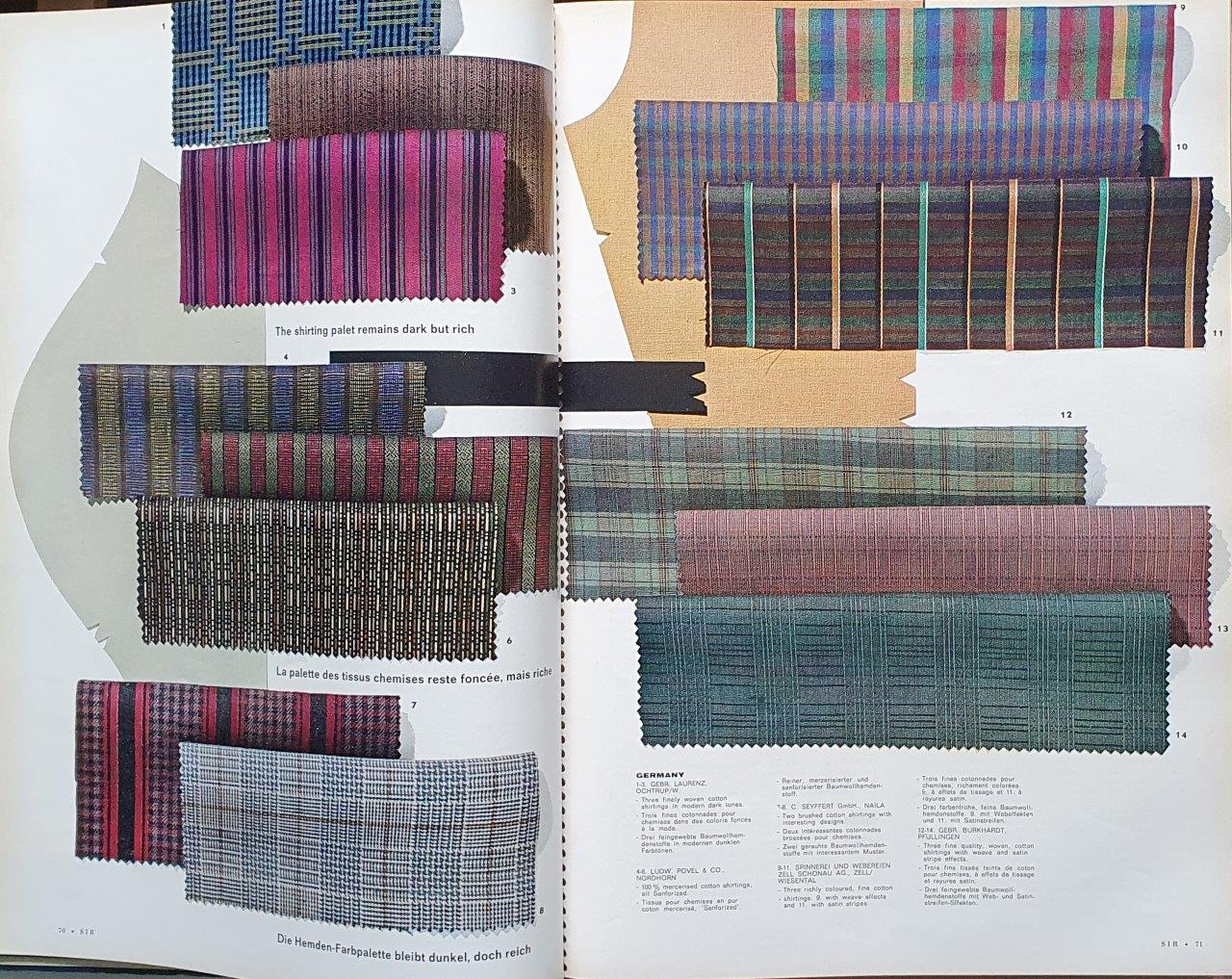 On occasion the editorial budget allowed full-colour representations of the latest trends in cloths and fabrics. 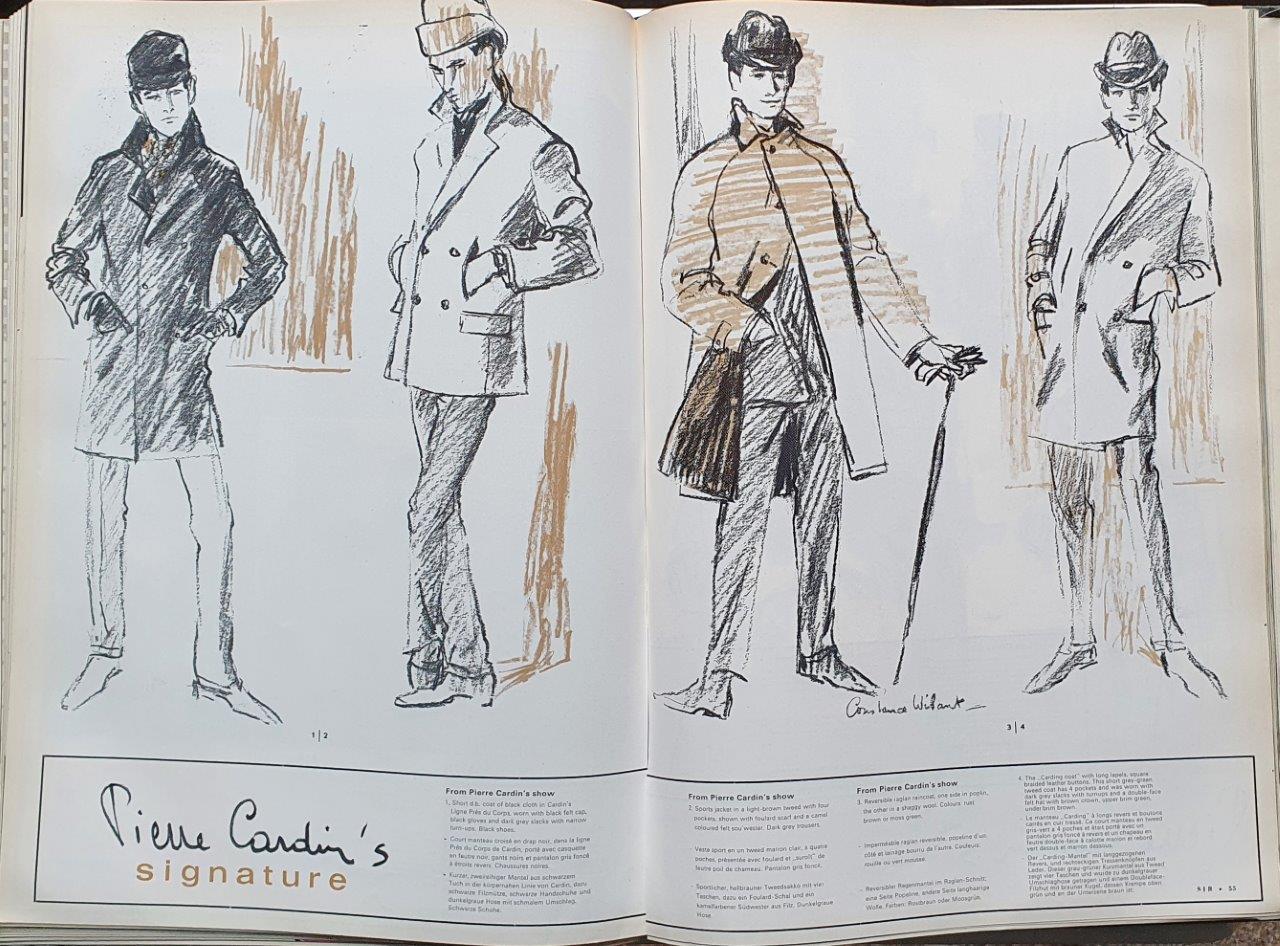 Being based in Amsterdam, Sir showed no national bias but it did regard Paris, London and Rome as the centre of menswear development. Especially in the 1960s it was very keen on showing the latest ideas from Pierre Cardin, the first womenswear couturier to make a reputation in menswear. Cardin’s illustrations were by Constance Wibaut. 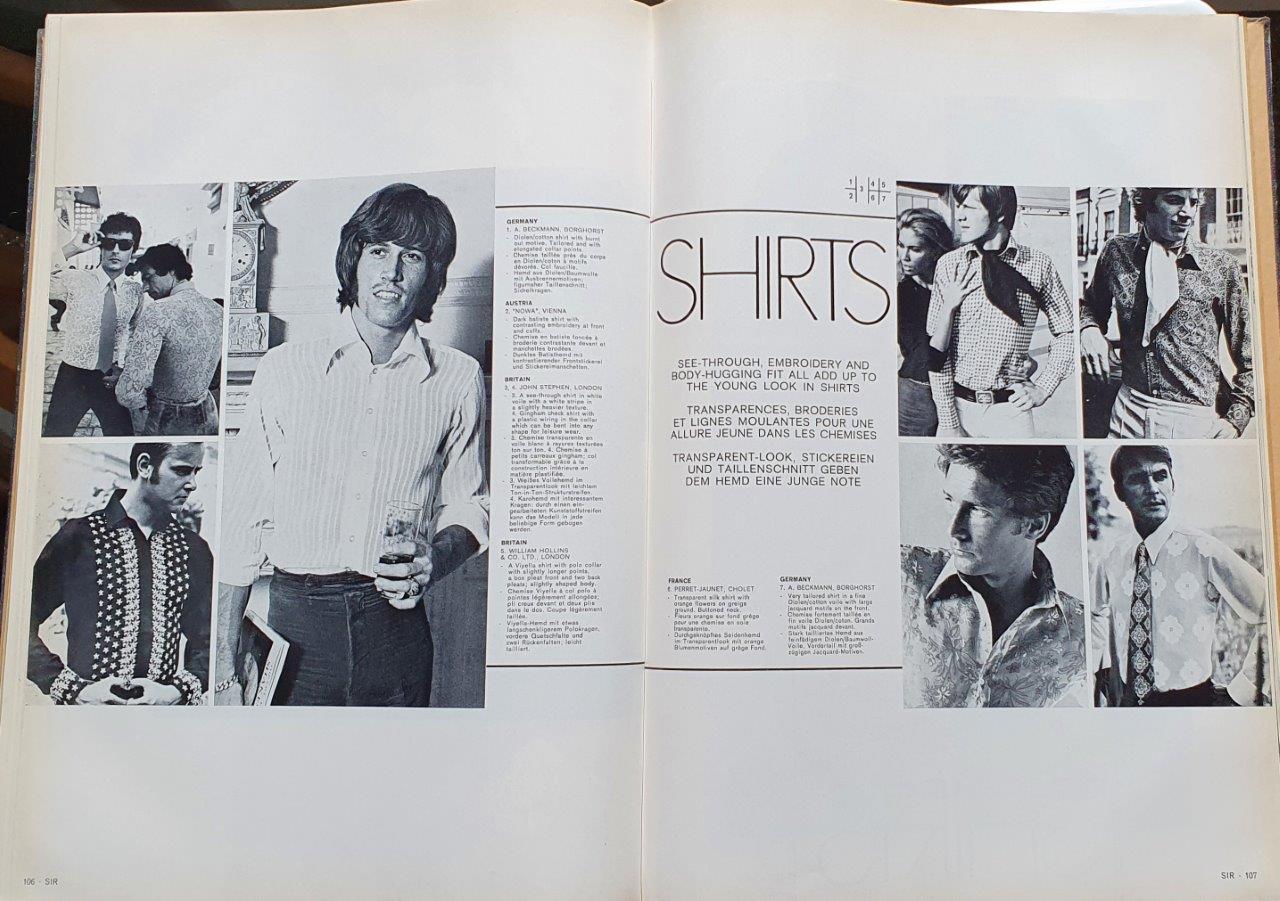 Sir used hundreds of press photographs over the years. Occasionally a celebrity is spotted doing some modelling. Here Barry Gibb of The Bee Gees wears a white shirt by John Stephen, the man credited with making Carnaby Street the menswear centre of the Swinging Sixties. 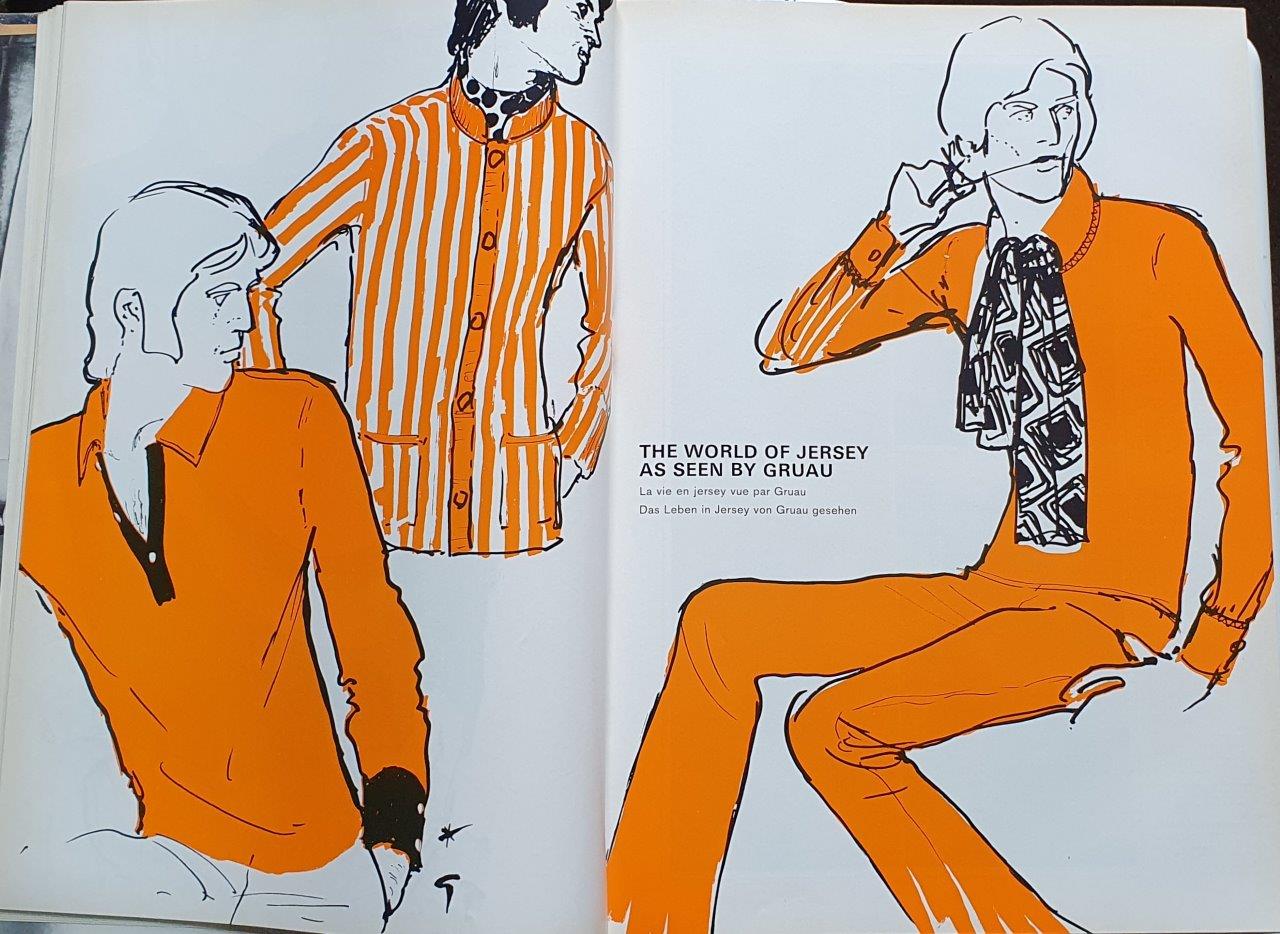 While René Gruau sometimes used a few colours on his covers, for his trend pages – which were always the first item in the issue – he tended to stick to black and just one highlight colour. Orange was an uncommon choice for him. 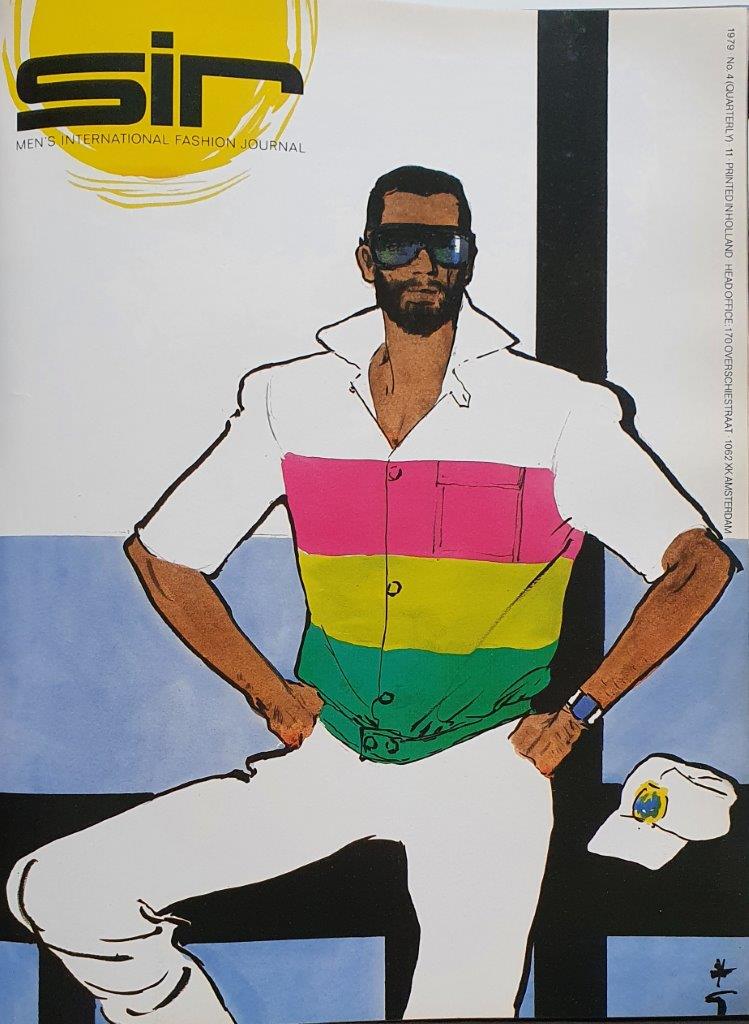 Sir and René Gruau signalled the start of the 1980s with this cover.