The Romantic Ballet- A Closer Look

Guest Blogger Jenny Macleod shares her love of the Ballet

The costume worn by the ballerina is integral to their performance.  When she takes to the stage she becomes the focal point for the audience, and assisted by her floating costume and graceful steps, she keeps them continually mesmerised, creating the illusion of an unattainable fairy-like being.  I have always been enamoured with the art of ballet, and when the chance came to integrate it into my postgraduate research I jumped at the chance.
Ballet costume evolved radically from the cumbersome court dresses of the eighteenth century to the shorter, floating garments of the 1830s Romantic ballet.  My research in the second semester of my MLitt in Dress & Textile Histories has thus focused on the development of ballet costume in the nineteenth century, particularly during the Romanic Movement, and the factors which motivated this evolution.
In 1832 at the Paris Opera, a new ballet was premiered.  Danced by newcomer Marie Taglioni (1804-1884), La Sylphide was to become a milestone in the history of ballet, ushering in a new era to become known as the Romantic Ballet.  This stage in the evolution of ballet owed itself to developments in the visual arts and literature.  The Romantic Ballet relied very much on the creation of a mysterious and dream-like atmosphere to complement its supernatural themes.  To capture the essence of the ghostly characters, a new costume was required.
The dress took the form of a bell shaped skirt of white muslin and gauze, coming mid-way between the knee and ankle, whilst a tight fitted bodice revealed the neck and shoulders.  This is a long way from the neoclassical dress of the previous era, yet examination of reviews of La Sylphide’s London premier scarcely mention this.  This lack of attention suggests it was neither unique nor particularly noteworthy.  French designer, Eugène Lami (1800-1890) has been credited with the creation of the sylph costume, however no sketches relating to this design have been found.  This suggests he felt Taglioni’s own attire was a suitable outfit to portray the sylph.
It seems that ballet costume was still at this point very much following women’s fashionable dress and evolving according to each new trend.  The sylph’s first costume of the 1830s resembles the growing silhouette of the period, featuring fuller skirts, puffed sleeves, and a low, off the shoulder neckline to emphasise the smaller waist, which was now sitting at a more natural level.  By the 1860s, at the heights of the crinoline, the Romantic tutu was also much wider, to reflect the desirable voluminous style.  The sleeveless bodice of the evening dress continued to be favoured as the decades wore on due to its practicality, allowing for the bending and raising of the arms.
Despite its beauty, the Romantic tutu when combined with the new atmospheric gas lighting had the potential to become disastrous.  The mid-nineteenth century saw a number of reports of ballerina’s skirts catching fire against the lighting.  One notable tragedy occurred in 1862 when 21 year old Emma Livery’s (1842-1863) skirt caught alight during a rehearsal, causing her serious burns which eventually lead to her death eight months later.
It is clear that since the eighteenth century, ballet costume has mirrored the changes in fashionable dress, and by the mid-nineteenth century it was no longer a representation of the upper classes.  Instead, it had taken on a character of its own and became a symbol of the beauty and delicateness of the Romantic era. 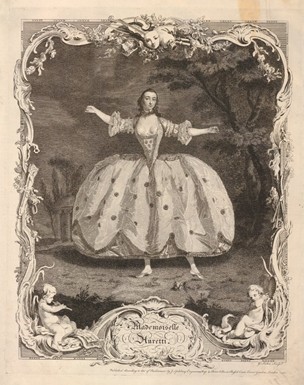 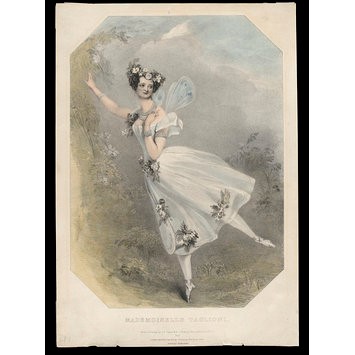 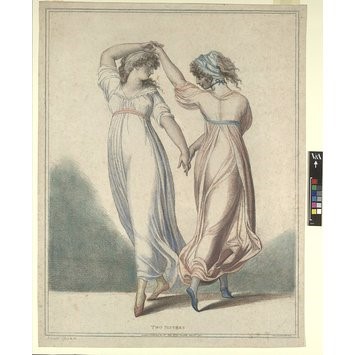