The Way We Wore

Housed in a darkened room at The National Museum of Ireland at Collins Barracks is ‘ The Way We Wore ’, an exhibition dedicated to Irish dress from the 1760s to the 1960s and what a treasure trove it is. It is rare to find an exhibition dedicated solely to historical Irish dress and, while this collection is small, it is fascinating to visit and see examples of garments made and worn in Ireland. The garments form one half of the exhibition which continues in a second room dedicated to jewellery, a must-visit for those who love all that glitters and shines.

The room set up is very simple. Mannequins are displayed alone or in small groups in curved display cases, with some including objects relating to the garments. Large text panels are dotted around the room combining text and image. Text panels can be hit or miss at times but the text panels used here were brilliant, including when possible the date, the maker, the materials and the wearer, providing an insight into the time period. For example the panel for an aniline dyed day gown from 1867 noted that the dress was worn by a Mary Sweeney to her brother’s wedding. It drew the ire of the priest who did not agree with the figure revealing ensemble.

So often we think of Irish dress in terms of stereotypes; the Aran jumper, the shawl and the petticoat. The garments on display cover a wide timeline of dress history and reflect the styles of their respective periods. Each one is made in Ireland, showing that we did look to outside influences and that foreign fashions did reach Irish shores and did have an audience here. One dress that pays testament to this is a pink satin tunic. It is very evocative of the fashion of the period; the embracing of the natural figure, the craze for all things oriental, the designs of Poiret and costumes of the Ballet Russe. It was created at 53 Dawson Street by Mrs. Abigail McAsey, a Dublin based dressmaker (far from the Salon of Poiret or the theatre stages of Paris). The dress consists of an over-tunic and an underskirt. The v-shaped neckline, wrist length sleeves and the hem of the over-tunic are trimmed in grey chinchilla fur. A brocade sash with ties emphasises the high waist of the garment. The dress is so very different to everything else in the room and not what I would have imagined being worn in Dublin in the late 1910s, a period of social and political unrest. The dress formed part of the wedding trousseau of Isabella Levingston.

While many of the garments in the room are emblematic of period trends, a blue and green Celtic revival dress is more representative of the social and political climate of early 20 th  century Ireland, a period of unrest and uncertainty. The dress dates from circa 1927, some six years after the formation of the Irish Free State, and is an example of dress developed by groups as a means of promoting Irish national identity. The blue and green ensemble consists of five parts; a sash belt, a blue silk poplin headdress, a green silk veil and a brat of green silk poplin. Silk embroidered motifs adorn the dress, belt, headdress and brat. The motifs are inspired by the colourful and intricate designs found in illuminated manuscripts such as the Book of Kells.

The garment was created by Katherine McCormack, a member of the Dun Emer Guild, which was founded in 1902 by Evelyn Gleeson as an arts and craft co-operative. It was run by women, employed only women and sought to revive native Irish traditions such as tapestry, embroidery, and rug making, using Irish materials such as linen and wool. The guild’s name came from Celtic mythology, after Emer, wife of the Irish mythological hero Cuchulainn and a skilled needle-woman in her own right. This ensemble, worn by Clare Kennedy, is a prime example of how national identity was expressed through clothing in the early 20 th  century in Ireland. We can communicate so much through the garments we wear. They can align us with one group or set of beliefs and demarcate us from another set.

Nearby is the display of a number of garments worn by the First Ladies of Ireland, including Sinead De Valera and Dr. Maeve Hillery, whose woollen cloak was one of my firm favourites. Simple yet timeless, it was worn by the First Lady Maeve Hillery in 1976 to her husband’s inauguration. Dr. Hillery had studied medicine and was an anaesthetist and her husband Patrick was president from 1976 to 1990, only the sixth president of Ireland. One of the images shows the pair in 1976 and it appears that Maeve is wearing the cloak in question.

Though small, ‘The Way We Wore’ packs a lot into its textile room. Other notable pieces include a pleated linen gown by Sybil Connolly, a wedding dress worn by a young Quaker woman to her wedding in the late 1840s and a mourning dress from the same period.  While the exhibition lacks the fanfare, space and number of garments of other exhibitions, ‘The Way We Wore’ shines a light on aspects of Irish design that have long been overlooked, bringing into the public arena examples of Irish dress, Irish textiles and the names of makers who were once sought after.

‘The Way We Wore’ is currently on display at The National Museum of Ireland at Collins Barracks in Dublin. 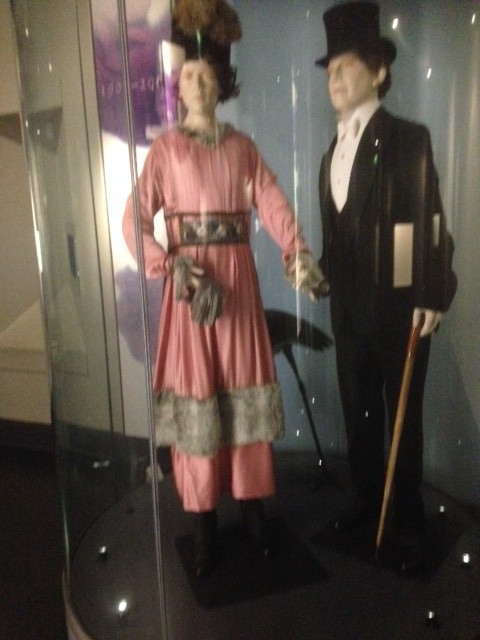 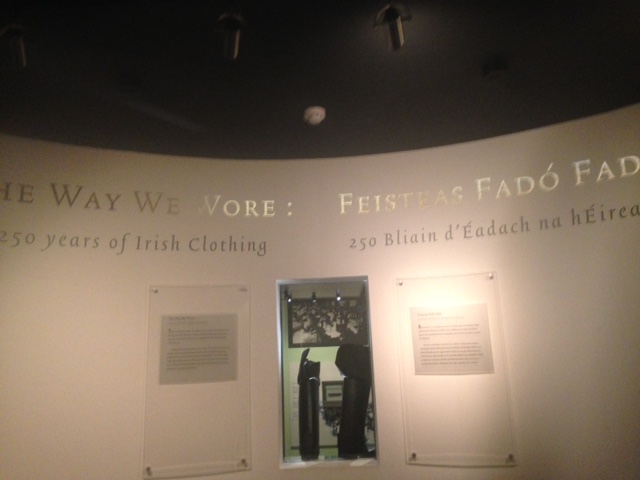 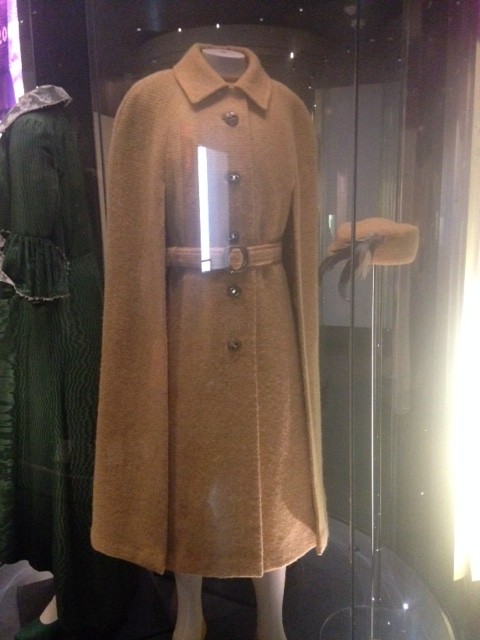