A fine line in fashion: The Art of Gladys Perint Palmer

In this week’s blog, Costume Society News Editor Babette Radclyffe-Thomas reviews ‘A Fine Line in Fashion: The Art of Gladys Perint Palmer’, a retrospective exhibition of the inimitable fashion illustrator that showed in London during London Fashion Week and opens in Bath in March.

One of the highlights of London Fashion Week was an exhibition featuring over 30 original fashion illustrations by artist, journalist and fashion illustrator extraordinaire Gladys Perint Palmer - or GPP as she is known in the industry – although, out of respect, Karl Lagerfeld would only ever call her Madame Palmer.

In a career lasting more than half a century, GPP has depicted some of the most famous fashion runways and has perfected the art of capturing a moment in fashion history with a sweep of her pen. Her elegant, vibrant illustrations transport viewers to the front rows of some of the most iconic fashion shows ever staged. In the words of Valentino, … “what makes a difference between Glady’s work and most of the others is that she does not draw a still subject, but her drawings have life because they capture a moment, a situation…” So it was a rare treat to see a selection of her artworks on show at Gray M.C.A’s London-based gallery at Cromwell Place during London Fashion Week before transferring to their Bath gallery. 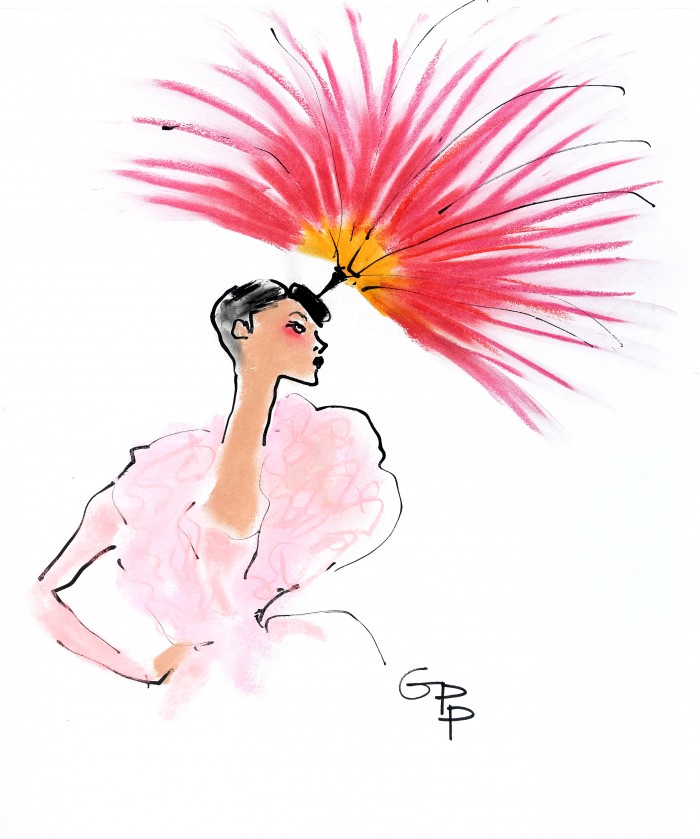 In 1998 Fashion Book named GPP as one of 500 people of influence since 1860. Jean Paul Gaultier said of her work that “when she sketches some of my clothes or other designers’ clothes, but especially mine, I say, now I have to produce the clothes in the way that she did it. She interprets with her own personality”. GPP has worked with some of most influential names in fashion publishing. GPP’s illustrations have featured in the pages of The New York Times, The Sunday Times UK, Elle, The Washington Post and many international editions of Vogue. Gianni Versace commissioned her to illustrate his 1996 book Do Not Disturb and her fashion illustrations have even adorned Hong Kong’s iconic trams. Fashion illustration has even taken her behind the silver screen – film director Robert Altman invited GPP onto the set of Prêt-à-Porter to draw acting giants including Sophia Loren, Richard E Grant and Kim Bassinger. During her time on set, GPP created 109 drawings which are currently housed in the Academy of Motion Picture Arts in Beverly Hills.

GPP’s and Gray MCA’s collaboration started a few years ago with a series of popular virtual masterclasses held during the pandemic. During the run of A Fine Line in Fashion a few lucky visitors were treated to an extensive guided tour given by Gladys herself where she regaled us with tales from her life in fashion. Although GPP is an extremely talented and successful artist, she remains humble and is witty and very entertaining. There is definitely a story behind every image and we heard how her artistry has taken her around the world from Hong Kong to San Francisco, how she perfected her technique of pinching front row fashion week seats, and which editors she loved - and those she found a little terrifying!

Born in Hungary, Gladys’ mother encouraged her to draw. She attended Saint Martins School of Art in London and she still recalls the influence of tutors Muriel Pemberton and Elizabeth Suter, who taught her the key foundations of fashion illustration and honed her techniques.

After graduation GPP headed to New York and Parsons, where in 1962 while still a student she landed an impressive nine pages in Harpers Bazaar. A year later heralded her first cover of British Vogue. GPP had a copy of this to hand – it is a stunning illustration and still strikingly fashionable in 2022. 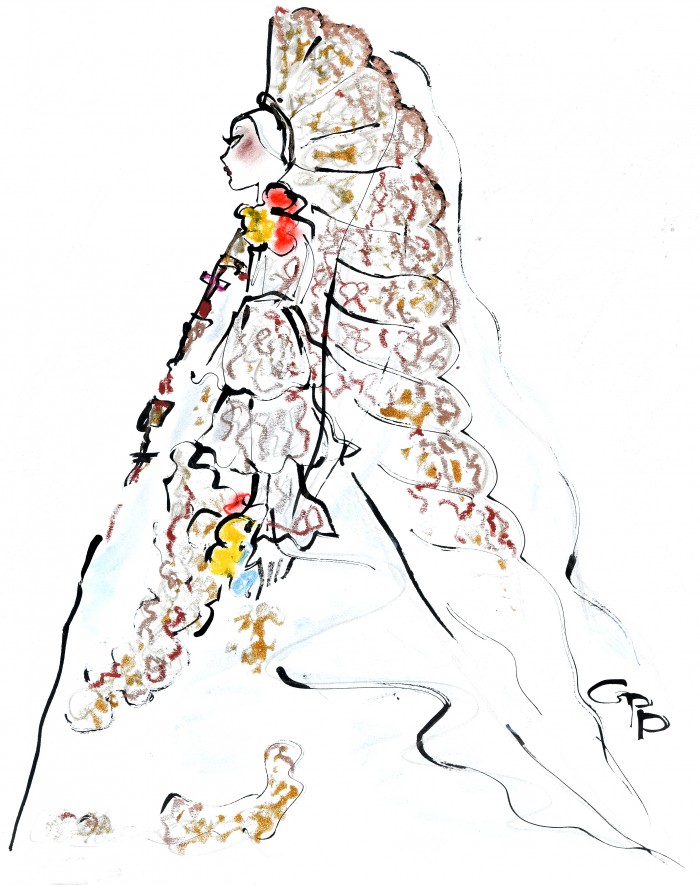 GPP is renowned for depicting not only what is on the catwalk but also whatever takes her fancy from her surroundings. She is often drawn to the colour and attitude of those occupying the front row, and GPP tells an amusing anecdote about how she once spotted Anna Piaggi, the legendary editor of Italian Vogue, in the audience and took pen to paper sketching her fabulous look. Stealing someone else’s front row seat, GPP later ended up sitting next to Anna, who was intrigued and asked to see the picture. Of course, she loved it and this chance encounter sparked a collaboration that lasted a lifetime. Piaggi swiftly arranged a solo exhibition of GPP’s work in Milan during fashion week in 1989.

Intriguingly, the back cover of the exhibition catalogue depicts a sole elegant chair at the Christian Dior show adorned with GPP’s name. Talking about how this illustration came to be GPP shared another entertaining ‘behind the scenes’ anecdote about how fashion PRs, invitees and audience members jostle for places and over the hierarchy of who sits where to see the shows. In this particular instance, despite being on the guest list GPP had been refused entry, but she finally succeeded in entering the show on the arm of renowned patron of John Galliano, whereupon she discovered that this elegant chair had been hers all along!

GPP is a vivid storyteller, and her creative process is absolutely fascinating. She described rushing back to her hotel room after a show, often working in hotel rooms setting up an improvised light box. Her distinctive initials adorn each illustration, and some include a few witty words to accompany the image. She draws standing up, quickly when it’s going well, but when is more of a struggle, the floor is covered with rejected drawings – she shared that an illustration can take 7 minutes or 50 years!

Not only an artist, GPP is a journalist and columnist writing columns for iconic publications such as Italian Vogue and she formerly the fashion editor of the San Francisco Examiner. In 2006, the mayor of San Francisco declared the 24th of May as Gladys Perint Palmer Day! More recently, GPP was commissioned to design silk scarves for Talbots, USA. She wore an exquisite example of one of her designs for the guided tour. 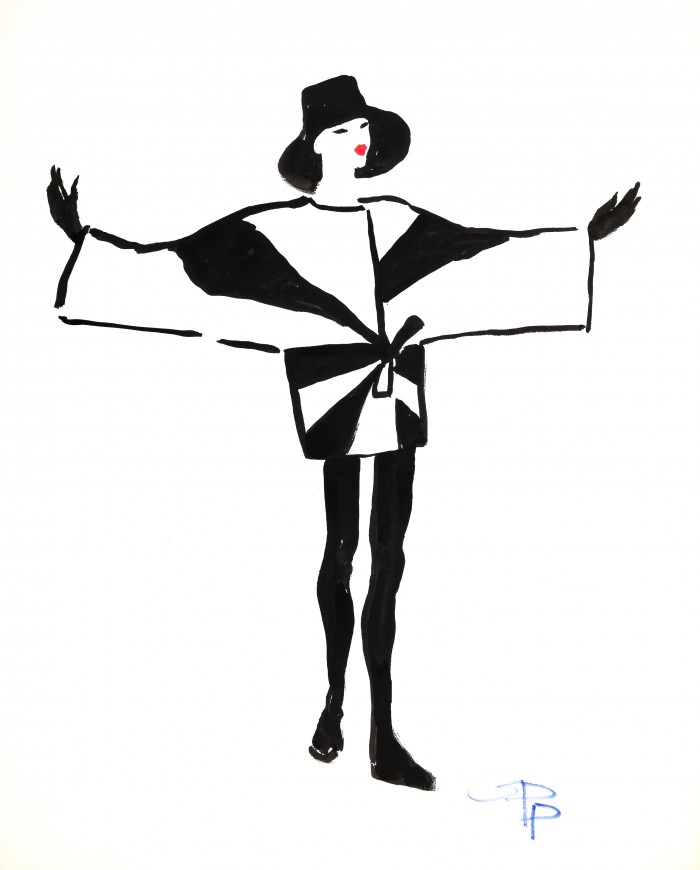 GPP’s life and art captures a magical period in fashion history and A Fine Line in Fashion is very welcome escapism that celebrates the joy and artistry of fashion illustration, so do visit if you get a chance and revel in this stunning exhibition.

Gray M.C.A is the leading international art gallery in the specialist art field of original fashion illustration focusing on the original artworks by the 20th-century masters and a small select field of contemporary masters. Gray M.C.A also focuses on unique sculpture and design from the mid-20th Century to the modern day. In addition, Gray M.C.A specialises in Modern Artist Textiles, a vital creative pillar in the story of Modern and Contemporary Art and a key element of the wider works of the great modern masters of the 20th century. 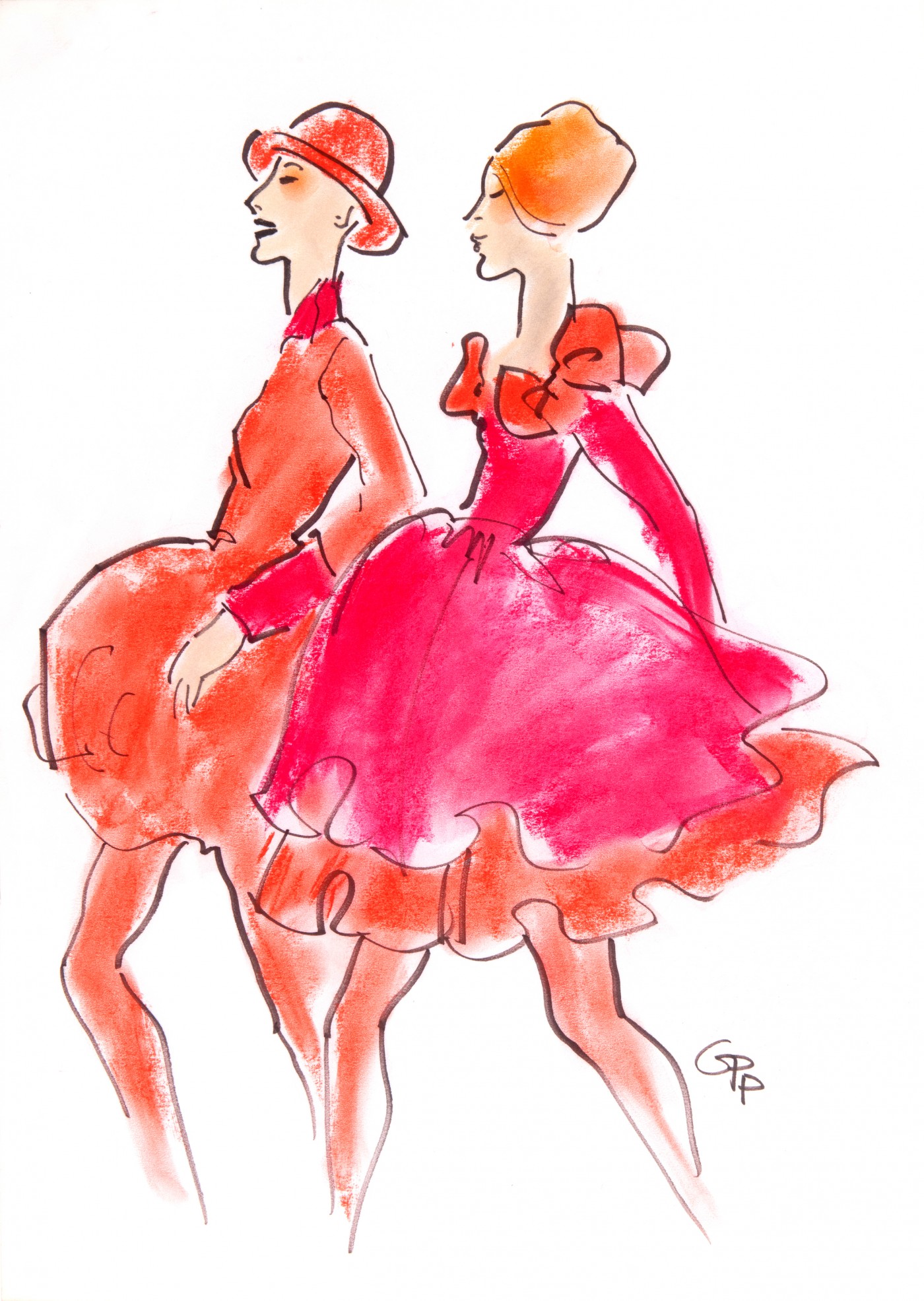 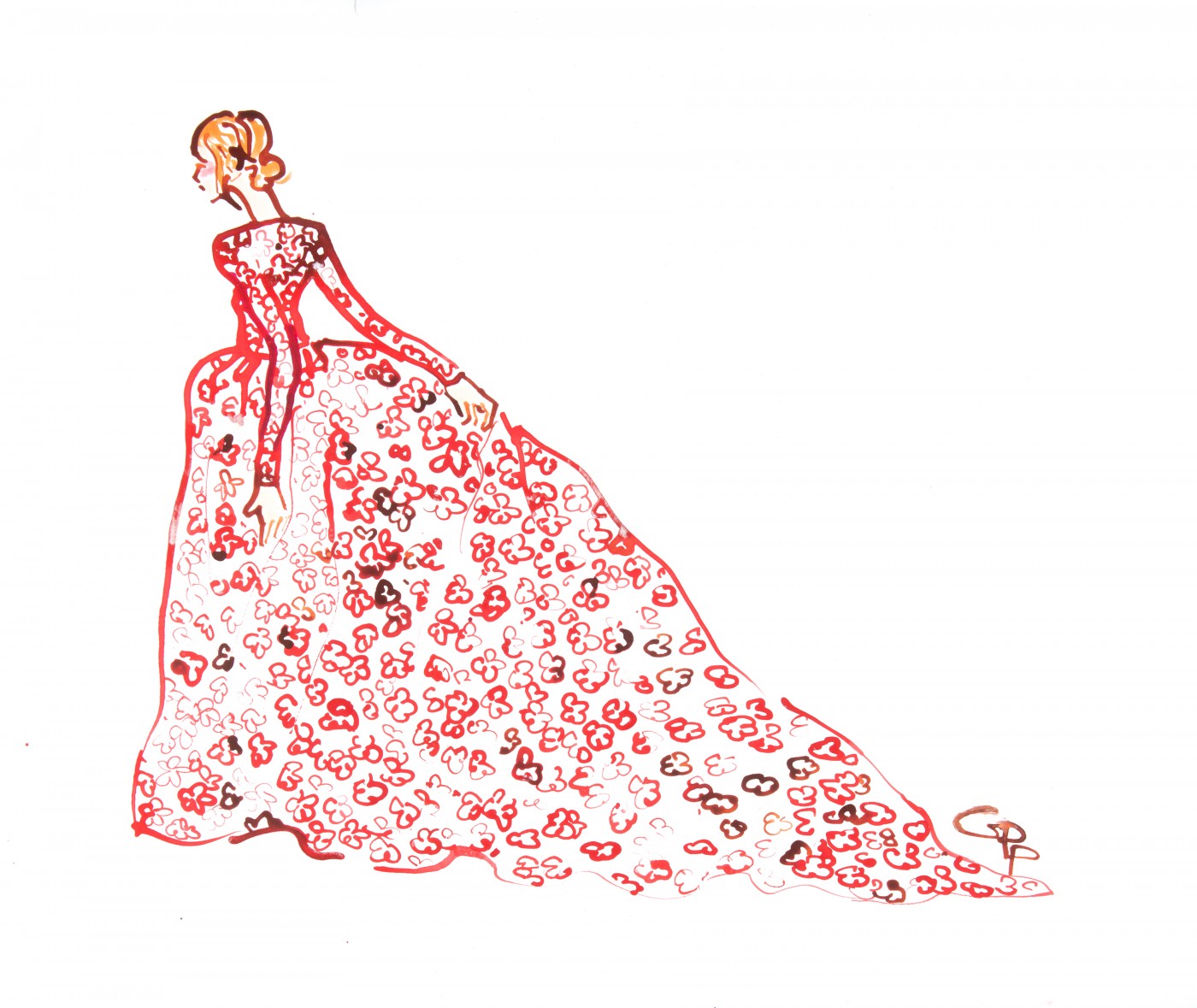 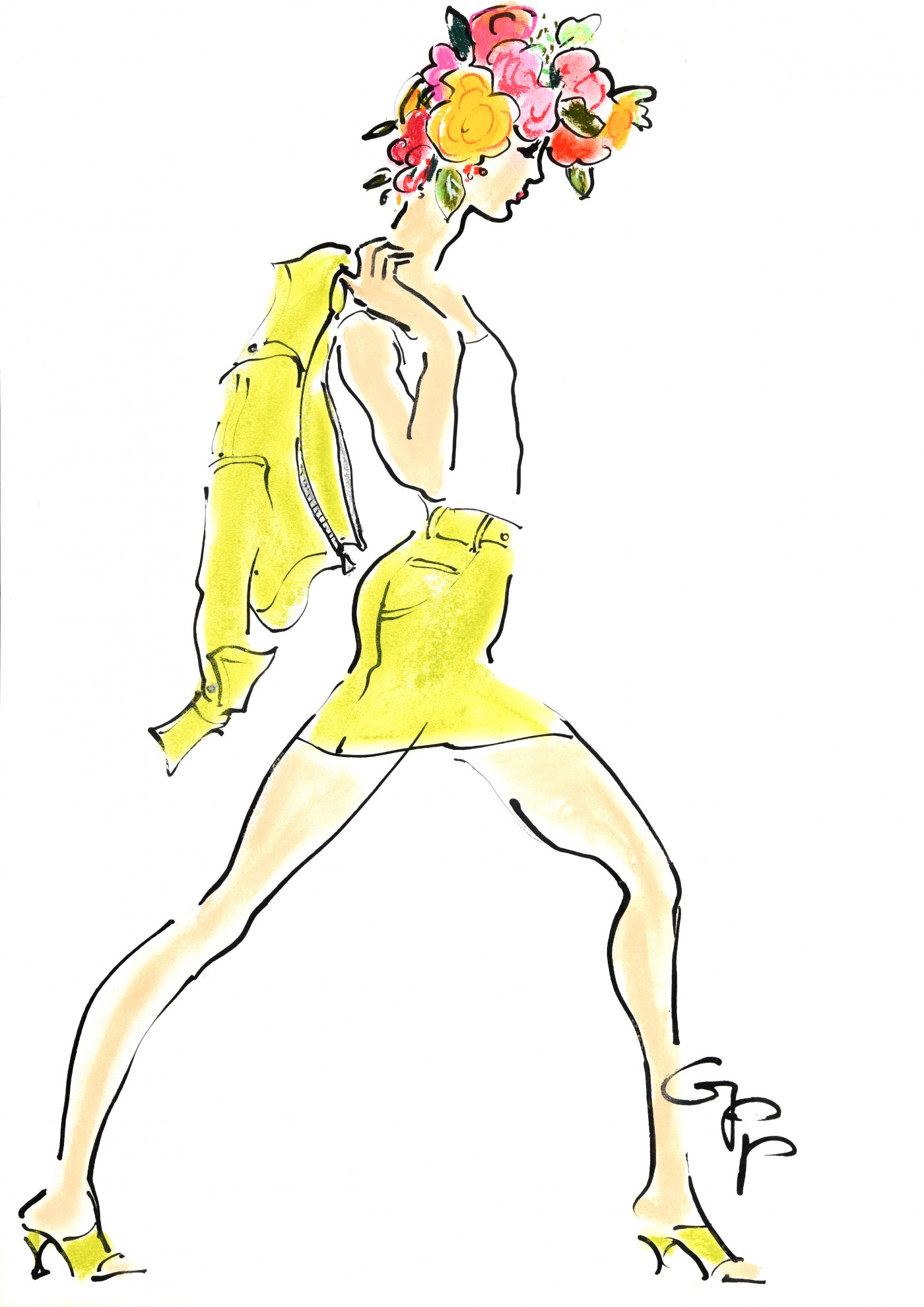