In this week's blog post, Costume Society ambassador Wendy Fraser reviews the Noel Coward Art and Style exhibition which is currently on show at the Guildhall Art Gallery, London.

Noël Coward: Art & Style, curated by Brad Rosenstein and Alice Halifax, celebrates the centenary of the first play that Noël Coward wrote, directed, and starred in, I’ll Leave It to You, being performed in the West End. Hosted at the Guildhall Art Gallery, London it takes a holistic look at the material culture of Coward’s private and professional lives; from the costumes of the actors in his plays to the furniture he chose for his beautiful homes and the clothes he wore in public life and on holiday.

Noël Coward (1899-1973) began his career as a child actor and went on to become one of the most important figures in the history of stage and screen. He was a playwright, composer, director, actor, and producer, he performed in cabaret and on TV and was a talented amateur painter, author, and philanthropist. Coward’s illustrations of stage costumes made when he was aged only 15 years old showcase his precocious early talent for design and his interest in all aspects of the staging of productions. He is most famous for his plays Blithe Spirit and Brief Encounter which both had film adaptations and his songs Mad Dogs and Englishmen and Mad About the Boy. Coward worked with some of the leading names of the age and counted many of them as personal friends. He collaborated with artists, couturiers, and theatrical designers including Oliver Messel, Cecil Beaton, and Barbara Karinska to produce beautiful costumes and sets to create imaginary worlds on stage and screen. 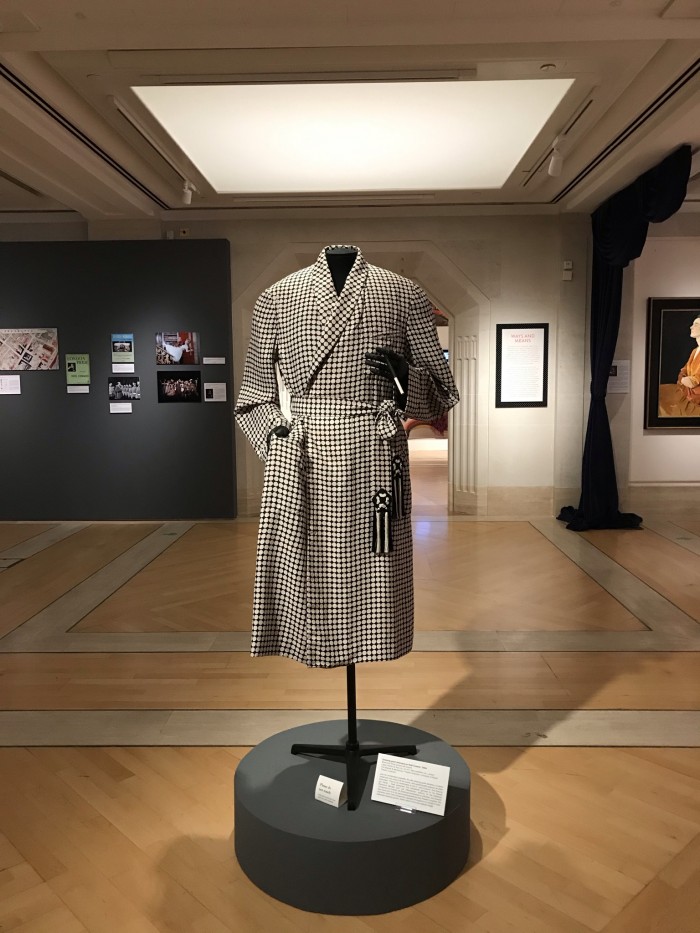 Visitors are welcomed into the exhibition by a 1950s black and white spotted silk dressing gown tied with a belt with crochet motifs and tassels. Instantly recognisable as Coward, the mannequin holds a cigarette holder and establishes his popular image according to Rosenstein; ‘the silk dressing gown became a Coward trademark, the uniform of the suave, ultra-sophisticated playboy he often embodied’.

A beautiful peach velvet evening cape with an overlay of gilt lamé and cutwork lace edged in fox fur dating to c1920 from Brighton Museum’s collection makes its first appearance in an exhibition (see image two). It was designed by Lucile (Lady Duff Gordon 1863-1935) and made in Paris. Lucile designed for theatre actresses on and off stage, most famously for Lily Elsie, and this glamorous example of evening wear would have been worn by a theatregoer at the same time as Coward was making his debut.

Three mannequins are mounted on a semi-circular platform with a background representing an evening sky surrounded by an Art Deco-inspired window frame (see image three). The central mannequin wears a white satin bias-cut evening dress with a white silk belt and white gardenias at the neckline, a reconstruction of the dress designed by Edward Molyneux and worn by Gertrude Lawrence in the role of Amanda in Act I of Private Lives in 1930.

The dress became a huge fashion sensation when Lawrence was pictured in Vogue in October 1930 wearing the Molyneux dress under an arctic fox trimmed velvet evening coat. The bias cut allowed the fabric to glide across the body and the white dress looked striking against Lawrence’s tanned skin. Lawrence was a proponent of the new fashion for sunbathing in the 1930s and the text panel for the dress reveals she was one of the first owners of a ‘sun machine’ in Britain. The reconstructed dress was painstakingly researched by Timothy Morgan-Owen and made by Henry Wilkinson, especially for the exhibition. They discovered that the original dress was fashioned from a now obsolete fabric, ‘slipper satin’ and constructed in a unique way ‘each diamond panel was top-stitched to the skirt and the fabric underneath cut away from behind’.

Molyneux began his career as an illustrator for Lucile before establishing his own fashion house in Paris in 1919 and rising to become an eminent designer throughout the 1920s and 1930s. He collaborated with Coward from 1923 to 1966, dressing many of his leading ladies. Renowned for his evening wear, this example of his paired down elegant style is a midnight blue crepe and sequin dress from 1935-9.

A pyjama suit designed by Lucien Lelong (1889-1958) which was worn by Yvonne Bose, a member of the chorus in the production Charlot’s Revue which debuted in London in 1926 is also on show. The crepe de chine pyjamas have a print of stylised flowers and leaves in a peachy pink against a black background and decorative peach bands on the cuffs of the trousers. This chic costume reflects the 1920s fashion for relaxed daytime dressing and the growing acceptance of trousers for women. 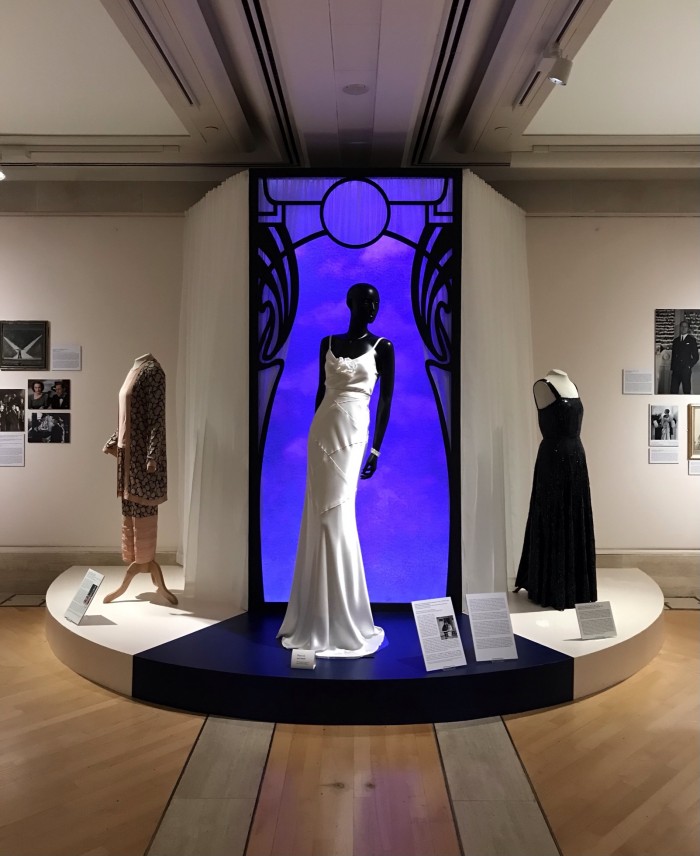 The mutually beneficial relationship between the theatre and fashion houses is emphasised in an advertisement from Cristabel Russell Ltd of Curzon Street promoting the ‘Charming Jessie Matthews Frock’, for twelve and a half guineas. The floral chiffon dress was worn by Matthews in Coward’s 1928 review The Year of Grace and advertised for theatregoers to buy in the show’s programme. In the next room a Norman Hartnell ensemble of a blue silk crepe dress c1932, printed with stars and embellished with sequins, under a fur-trimmed evening coat c.1937 is displayed. Hartnell (1901-1979) and Coward enjoyed a fruitful partnership, garnering media attention, for the costumes worn by Gertrude Lawrence in the 1936 play Tonight at 8.30.

I particularly enjoyed seeing some of Coward’s personal items such as his 1950s theatrical make-up monogrammed leather case as well as the cream silk dressing gown that he wore after his Vegas shows and was photographed in with stars such as Frank Sinatra and Judy Garland. A repaired cigarette burn on it is still visible and the stains are red wine – if only it could talk! His grey felt top hat and white kid gloves were worn for his charity fundraising activities at the Theatrical Garden Parties throughout the 1930s and 1940s. The slimline brown silk gabardine and silk suit that Coward wore in his performance in the 1968 film Boom! is on show. This was his favourite evening suit and is shown with an embroidered monogrammed handkerchief tucked in the top pocket of the jacket as well as a pair of stylish ‘NC’ monogrammed cufflinks.

Coward’s flamboyant pink tropical shirt worn that he wore relaxing with friends at his home in Jamaica in the 1960s shows another side to the top-hatted showman. I particularly appreciated the glass case that displays vintage and contemporary bottles of Coward’s favourite fragrances including Arpège by Lanvin and Floris Special no 127. A chaise longue from Chalet Coward in Switzerland is displayed with a Norman Hartnell red silk dress apparently discarded on I and also appears in a lovely photograph of Vivien Leigh lying on it that Coward has labelled with ‘VIV’.

The exhibition is rich in the ephemera of Coward’s life showcasing illustrations of costume designs, photographs of productions, programmes, sheet music, and personal letters and holiday snaps. Antique furniture, decorative objects picked up on his travels, and paintings from his beautiful homes in England, Switzerland, and Jamaica including his ‘Hamlet’ chair and the 17thc gilded winged hourglass which is now housed in the foyer of the Noël Coward Theatre give a sense of his elegant and luxurious lifestyle.

The final room of the exhibition displays contemporary fashion designs that would not look amiss in one of Coward’s productions. Georgina von Etzdorf’s velvet and silk dressing gowns and smoking jackets from the 1990s were influenced by the glamour of the 1920s and Anna Sui’s A/W 2017 collection uses luxurious fabrics and vintage detailing on beautifully layered dresses. The costumes sourced by Charlotte Walker for the 2020 movie remake of Blithe Spirit; a vintage blue lace dress with a velvet cape worn by Leslie Mann as Elvira and a rust velvet coat and teal dress worn with a turban by Judi Dench as Madame Arcati mark one hundred years of Coward in fitting style.

Noël Coward: Art & Style is produced by The Noël Coward Foundation, The Noël Coward Archive Trust, and The City of London Corporation. The exhibition is free, but booking is essential and runs until the 23rd of December.

Wendy Fraser is a Costume Society ambassador. Her studies at the University of Brighton began with BA (Hons) History of Art and Design and continued with MA in History of Design and Material Culture. For the last few years, she has volunteered in Brighton Museum’s costume store.

Peach velvet and gilt lame theatre/evening cape designed by Lucile and made in Paris, c1920. Photograph by author. 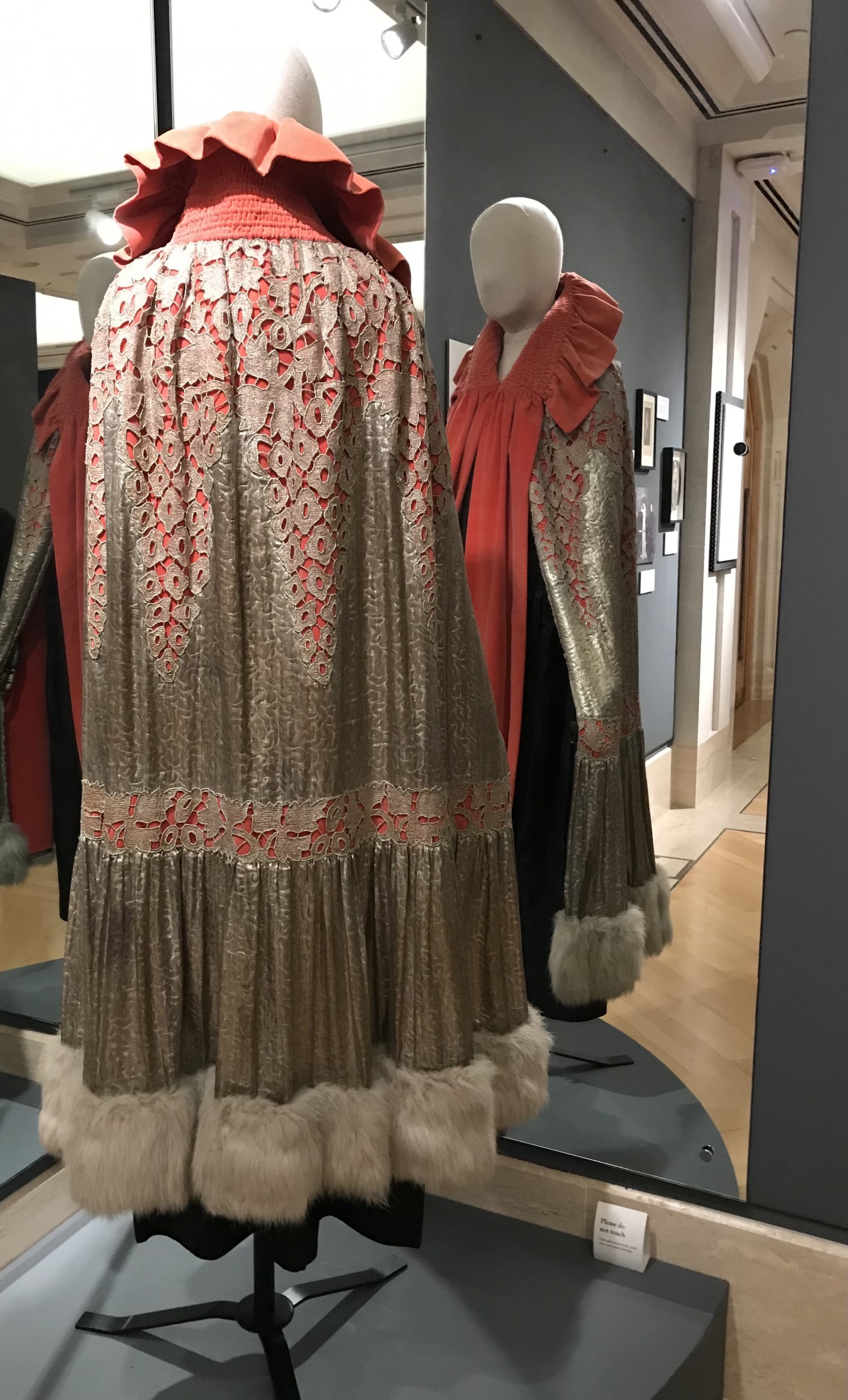 Peach velvet and gilt lame theatre/evening cape designed by Lucile and made in Paris, c1920. Photograph by author. 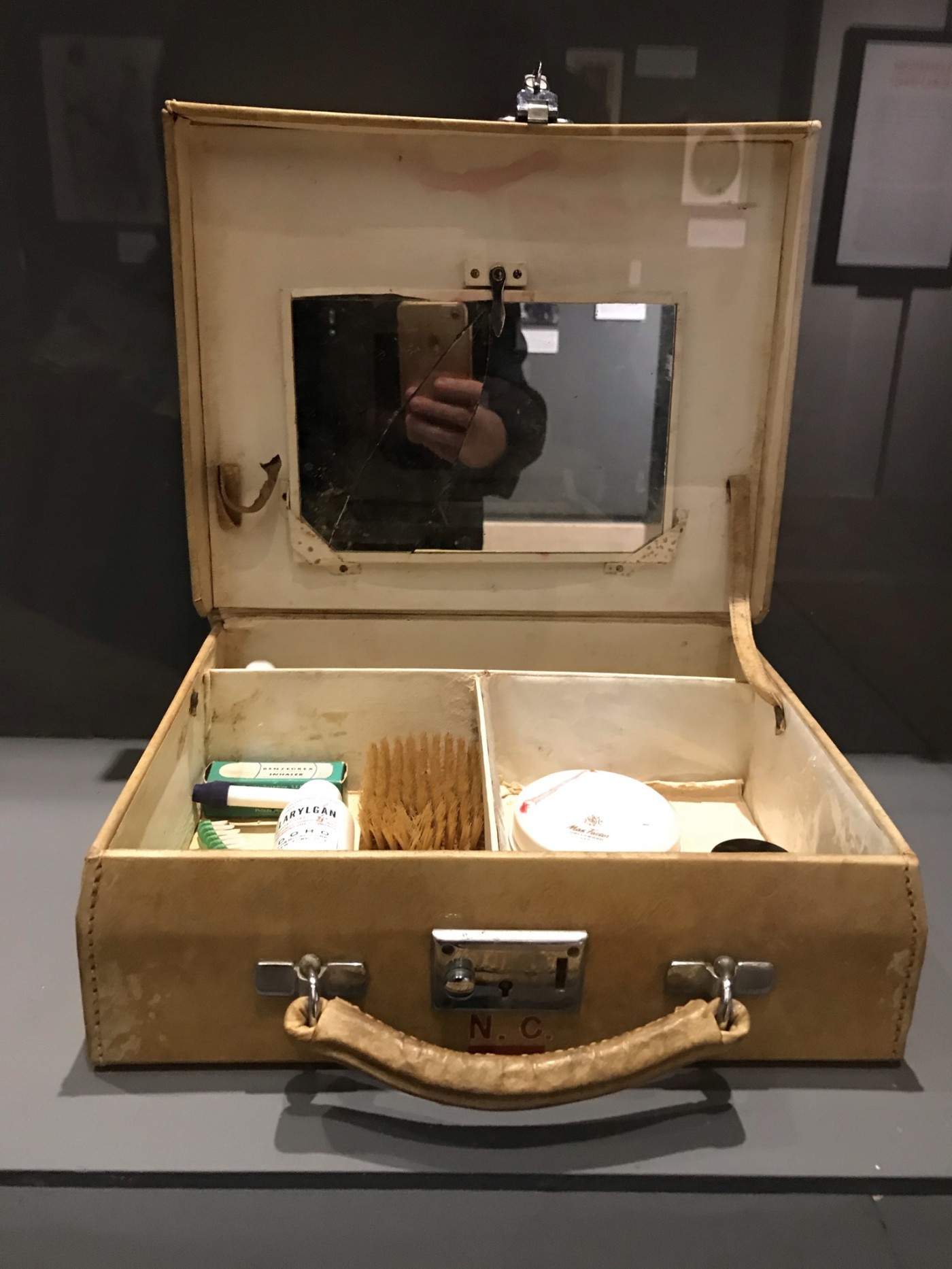 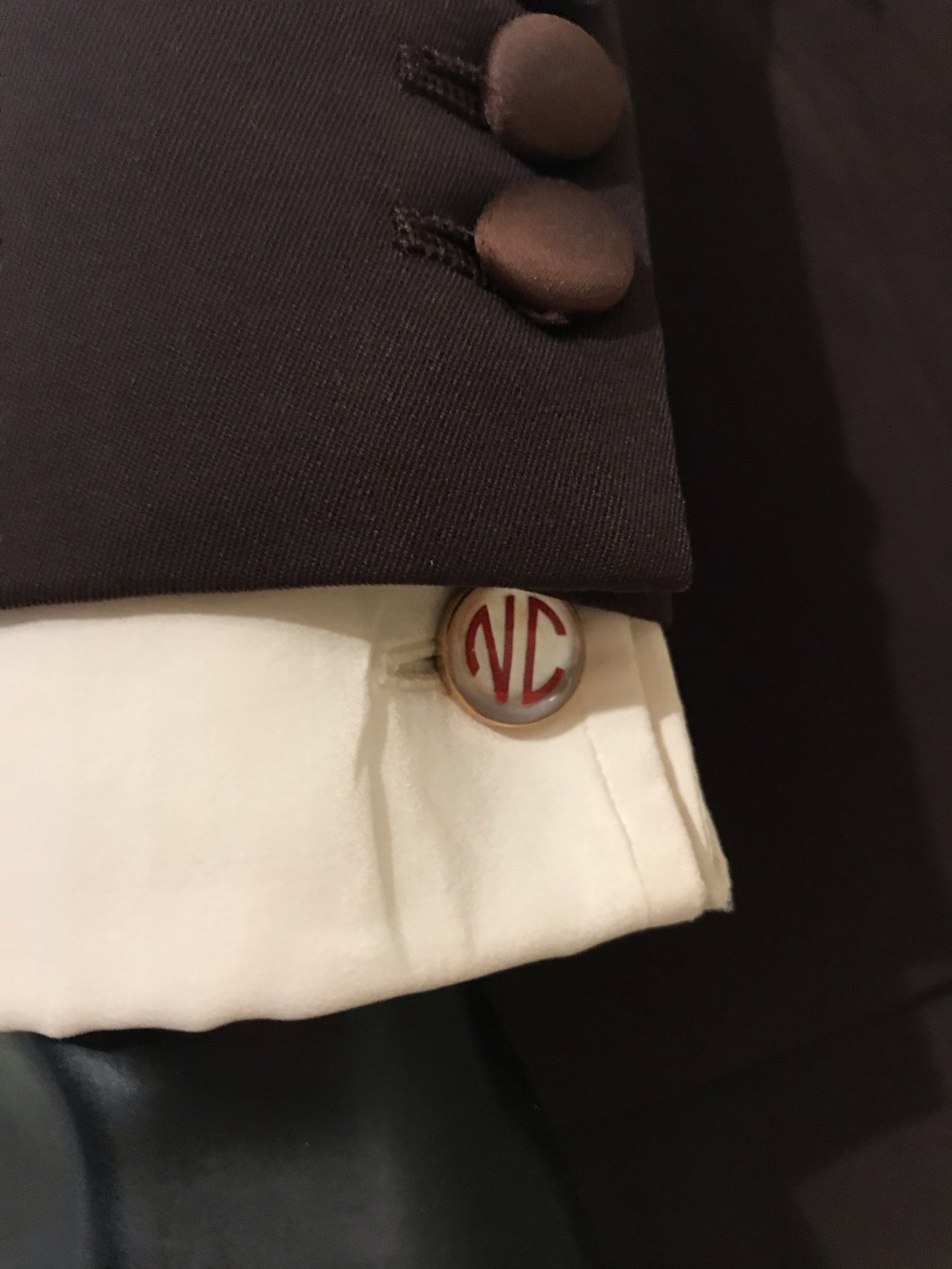