#CSFASHIONHOUR Sin and Status: The Problem of Gold, Part 1

In Sir Thomas More's Utopia (1516), a philosophical musing about the creation and maintenance of an ideal community, fetters of gold were worn by criminals, for this shiny, inert metal was considered worthless; to wear it, was to signify that you had become a social pariah. Ironically, the views of More, a steadfast Catholic who died for his faith, were shared by the indigenous peoples of America, uncivilised pagans in the eyes of their Western conquerors, whose lands were prized and systematically pillaged by Spanish conquistadores during the sixteenth century, as they searched for 'yellow metal' and the fabled city of El Dorado.

Of course, More’s thundering denunciation of gold reflects how much the metal was valued by his contemporaries. For centuries, Christian rulers had wrapped themselves in cloth of gold to signify their singular status and their steadfast devotion to God; More thought gold was corrupting, but many of his peers considered the reflective quality of this delicate material to represent inner purity. In 1235, for example, it is likely that Isabella, sister of Henry III of England, married Emperor Frederick II in a garment of cloth of gold i n serico , that is, cloth woven from silk threads wrapped with fine strands of gold. The Empress-in-waiting also wore garments of arest, another cloth of gold with a distinctive ribbed weave.

Able to signify sinfulness and soulfulness, the wearing gold has long been problematic.

Roland Barthes thought gold stubborn and cruel because it is ‘nothing but itself’. He actually thought gold to be ‘mediocre’, ‘a dull, yellowy metal’. He acknowledged its power, but insisted that this derived from the fact that it was not ‘convertible or useful’ and, consequently, of no ‘practical application’. As a result, ‘pure gold, whose usefulness was almost entirely self-referential, became superlative gold, absolute richness’. Whilst Barthes emphasises the inanimate nature of gold, he nonetheless implies that it has bewitched us: we extract the ore and mould it to suit our fancies, chiefly to demarcate hierarchies within social and political relationships, but the essential composition of gold remains unaltered. Ultimately, it is gold that changes us.

I can imagine that Barthes would have enjoyed Tolkien’s Lord of the Rings trilogy, which encapsulates the mysterious and malevolent force of gold by describing a quest to destroy the One Ring forged by the Dark Lord Sauron.

One Ring to rule them all, One Ring to find them,
One Ring to bring them all and in the darkness bind them.

Over time, Roland Barthes has suggested that gold (and gemstones) have lost their appeal through a process of democratisation. First, the magical quality of gold (and gems) was lost as the women who typically wore them acquired a more active role within society, making the wearing of expensive jewellery impractical. Second, and consequently, jewellery was increasingly made in a variety of non-precious materials, from glass to wood. Third, the range and moderate price of jewellery meant that it became a ‘next to nothing’. Jewellery was no longer worn in its own right, but as accompaniment to an outfit. Barthes’ assessment is simply constructed, but it well reflects (Western) society’s general repulsion of excessive personal adornment and the prevailing suspicion that people who devote too much time or money to their appearance are idle, shallow, or both.

The problem of gold is amply reflected in the fact that golden togs are rarely seen today. Anne Hathaway wore a Ralph Lauren liquid-gold hooded gown for the Met. Ball in May and brocading has made an appearance in recent catwalk collections, but there is a prevailing sense that More and Barthes were right, that gold is an oddly mercurial metal, and the master of us all.

Naturally, I am therefore keen to hear how the speakers at this weekend’s Costume Society Conference, who are considering gold in all of its multifarious forms, from fashion item to fictional token in fairytales, and from the 1500s through to 1950s, regard this beguiling metal. If you want to start the discussion before sooner, join Sarah Laurenson (@ReformLane) and me (@wilddoughnut) between 1300 and 1400 (GMT) for the Costume Society’s next Fashion Hour on Friday (3 July), where we will be discussing gold. Simply use #CSFashionHour to join the chat. 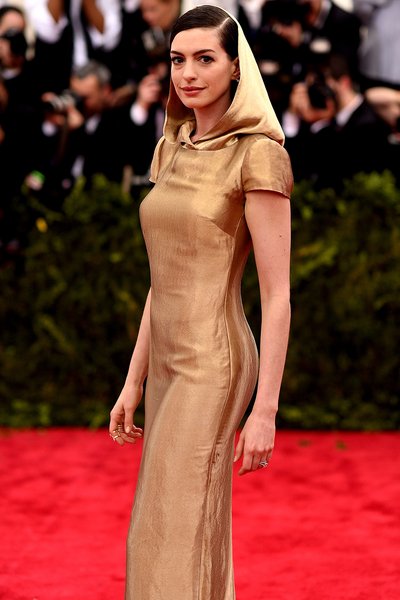 Anne Hathaway at the Met Ball, May 2015 (Image: Vanity Fair) 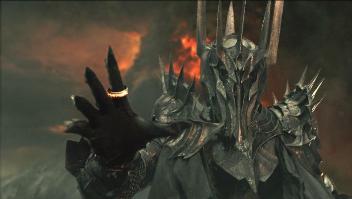 The Dark Lord Sauron from JRR Tolkein’s Lord of the Rings (Image: Wikipedia)