Gloves... A necessity for many in these unprecedented times! Isabella Rosner highlights the allure of gloves in Seventeenth century England where they were used more for decoration, elaborately embroidered and infused with scent.

With all of the talk about hand washing and glove wearing, hands are very much on the mind this year. But how do our latex or knit gloves compare to the hand-ware of yore? Gloves of seventeenth century England were perhaps just as important to early modern Englishmen and women as gloves are in our current social landscape, but for very different reasons. While for us, gloves maintain safety and hygiene, for seventeenth-century individuals, gloves acted as courtship or marriage gifts, signifiers of civic offices, representations of legal contracts, and objects of royal supplication or reward (1). This type of embroidered accessory is a lens through which contemporary viewers can more thoroughly understand seventeenth-century English life.

Seventeenth-century gloves are easily identifiable by their distinctive shape and elaborately embroidered gauntlets. At the beginning of the century, glove gauntlets were exaggeratedly large and glove fingers exceedingly long (2). Preserved examples indicate that a glove’s fingers could be up to a centimetre longer than the wearer’s actual fingers, creating an impression of tapering, graceful phalanges (3). These were meant to emulate Queen Elizabeth I’s famously elegant hands, which she herself loved to admire. As the seventeenth century progressed, gauntlets became smaller and fingers shortened to a more natural length. Embroidered gloves were made by professionals throughout the century and often involved an ample number of metallic elements, including metal purl, coiled wires, and spangles. The survival of many pairs of gloves in relatively good condition imply that the most opulent pairs were used more for decoration than necessity.

Seventeenth-century gloves, which appear often in portraiture to indicate the subject’s sophistication and wealth, were commonly exchanged between men and women as tokens of love. They were also given to and from members of royalty. Queen Elizabeth I was given many pairs of gloves that housed gold coins. Not only were royals given gloves, they also gave them to others. The wardrobe accounts for Charles I record the production of more than 1,000 pairs of gloves over just two years. (4) This suggests that they were not only necessary for covering the king’s hands, but also for giving out to those who pleased the king.

The specific embroidery stitched on gloves from this period could exhibit their owner’s personal loyalties or romantic desires, as indicated by two pairs of gloves at the Metropolitan Museum of Art. One pair, circa 1600, features weeping eyes, which may represent unrequited love (figure 1). Another pair from the 1620s displays flaming hearts. Perhaps these hearts are literal representations of burning love (figure 2).

In addition to being evocative in motif, seventeenth-century gloves were also evocative in scent. Gloves were often scented with musk, ambergris, flowers, herbs, and spices. (5) They acted as portable pomanders, containers of aromatic substances that provided their users a reprieve from the stench of daily life. It is generally accepted that much like the trend of long fingers, Queen Elizabeth I inspired the fashion of scented gloves. (6) She was presented her first pair of scented gloves in 1566 and the trend became well established in the following decades. Not only did pomanders and related objects provide relief from smelly city life, they also became very useful in plague years, as it was believed that the disease was miasmatic, spread through the air. It was thought that if one smelled sweet scents, they would not fall ill. Perfumed gloves to the rescue!

Almost 400 years after wealthy seventeenth-century Englishmen and women embellished their wardrobes with gloves to show their affections, loyalties, wealth, and sophistication, we have returned to glove fashion. Should we should start embroidering our gloves (just as long as they maintain their hygienic standard)? Perhaps a new fashion awaits, inspired by centuries-old gloves. 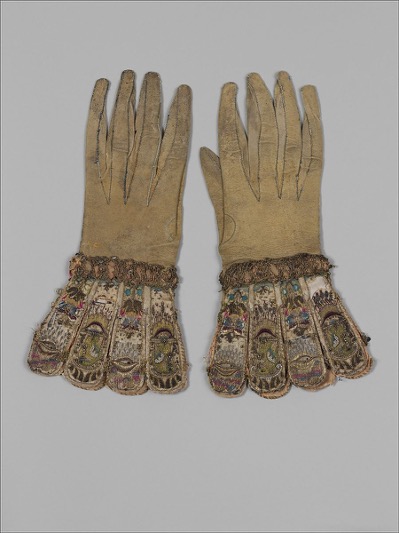 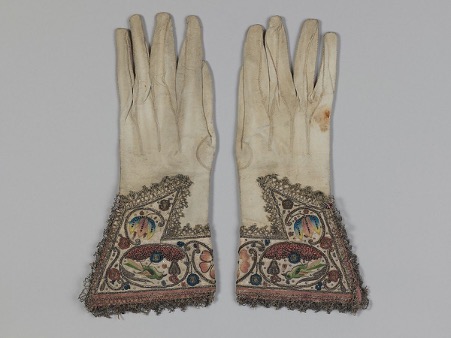