Do you know your alb from your chasuble? Diana Symes enlightens us

Guest blogger Diana Symes, Chairman of The Company of Tapisers at Exeter Cathedral shares an insight into ecclesiastical embroideries and vestments ahead of a new exhibition.

In August there will be a special exhibition,’For Worship and Glory’, in Exeter Cathedral by The Royal School of Needlework.

It will show remarkable examples of ecclesiastical embroidery from the 19th to the 21st centuries which should not be missed. Alongside, The Company of Tapisers will be displaying some of their own work.

The Company of Tapisers at Exeter Cathedral began in 1932 when a Mrs Thompson, wife of the Archdeacon of Exeter, organised a group of clergy wives to make a carpet for The Lady Chapel. The ladies stitched in silence, on a daily basis, for months until the work was completed : the carpet, with a jade green and blue border, measured 17 feet by 11 feet! Walter Matthews was Dean in the early 1930s and he saw the potential for skilled and enthusiastic needleworkers to make other items to enhance worship at the Cathedral. He suggested that an official ‘Company’ should be formed in June 1933.

He chose the name of ‘Tapiser’ (a person who covers cloth) to indicate that members would not only make carpets, but vestments and other furnishings as well. He also wanted the group to be a ‘Company’ in the medieval sense where all worked for one goal and not for personal fame – for this reason, even today, work completed by the Tapisers does not carry the name of any individual. Initially, over a hundred women joined and during their first five years they completed rugs, carpets, long kneelers, a cope, chasubles, stoles, an altar frontal, altar linen and alms bags. In 1938 Queen Mary, a keen needlewoman, visited Exeter Cathedral , and it was reported in The Express and Echo that “the work of the Tapisers won her admiration”.

The vestments , or ecclesiastical costumes ,worn by the clergy have changed very little since they first evolved from the everyday clothes of Roman citizens in the1st and 2nd centuries AD. In the medieval Great West Window in Exeter Cathedral St Peter is dressed as a bishop – in the same clothing we would recognise today: gold mitre, dark red chasuble, a white alb, a gold stole and a ceremonial maniple hanging from his left wrist.

Over the years Tapisers have made many chasubles and copes. A chasuble is the colourful over garment, circular in shape with a hole for the head, worn by the priest who presides over the Eucharist service. It developed from the Roman ‘overcoat’ or ‘’casula’ which means ‘little house’.

Traditionally, chasubles are made of silk damask or brocade with decorative bands called ‘orphreys’which can be y-shaped or a straight central pillar. The name ‘orphrey’ comes from the Latin ‘auriphrygium’ meaning ‘gold embroidery’.

The latest chasuble made by the Tapisers is a Rose one and has a central pillar orphrey. Rose has been a part of the Church’s tradition since the 16th century and symbolises joy and the promise of hope. It is worn on only two Sundays in the year: Mothering Sunday, before Easter, and the third Sunday in Advent, in December. To reflect these two occasions snowdrops and a Christmas rose are embroidered in silk shading beside a couched silver thread cross.

Copes, originally hooded cloaks, have developed into richly decorated processional garments. They have orphreys in the form of a straight decorative edging and the hood has evolved into a shield-shaped panel which hangs from the back of the neck.

Exeter Cathedral has many elaborate and intricately embroidered copes: possibly, the most stunning is the Millenium Cope which was made in 2000 to commemorate the beginning of a new era. The design was inspired by a quotation from the Book of Revelation: “and on either side of the river was there the tree of life, which bare twelve manner of fruits, and yielded her fruit every month: the leaves of the tree were for the healing of nations”.

The gold cope has an orphrey which depicts the twelve fruits and healing leaves; the hood shows a goldwork tree of life with all the fruits. The embroidery and appliqué work uses satins, velvets, silks, netting and gold thread. The many fruits are instantly identifiable – from apples, grapes and strawberries -and if you look closely, you will find a snail and a goldwork bee, too!

Do come along to Exeter Cathedral in August to see these pieces – and so much more. 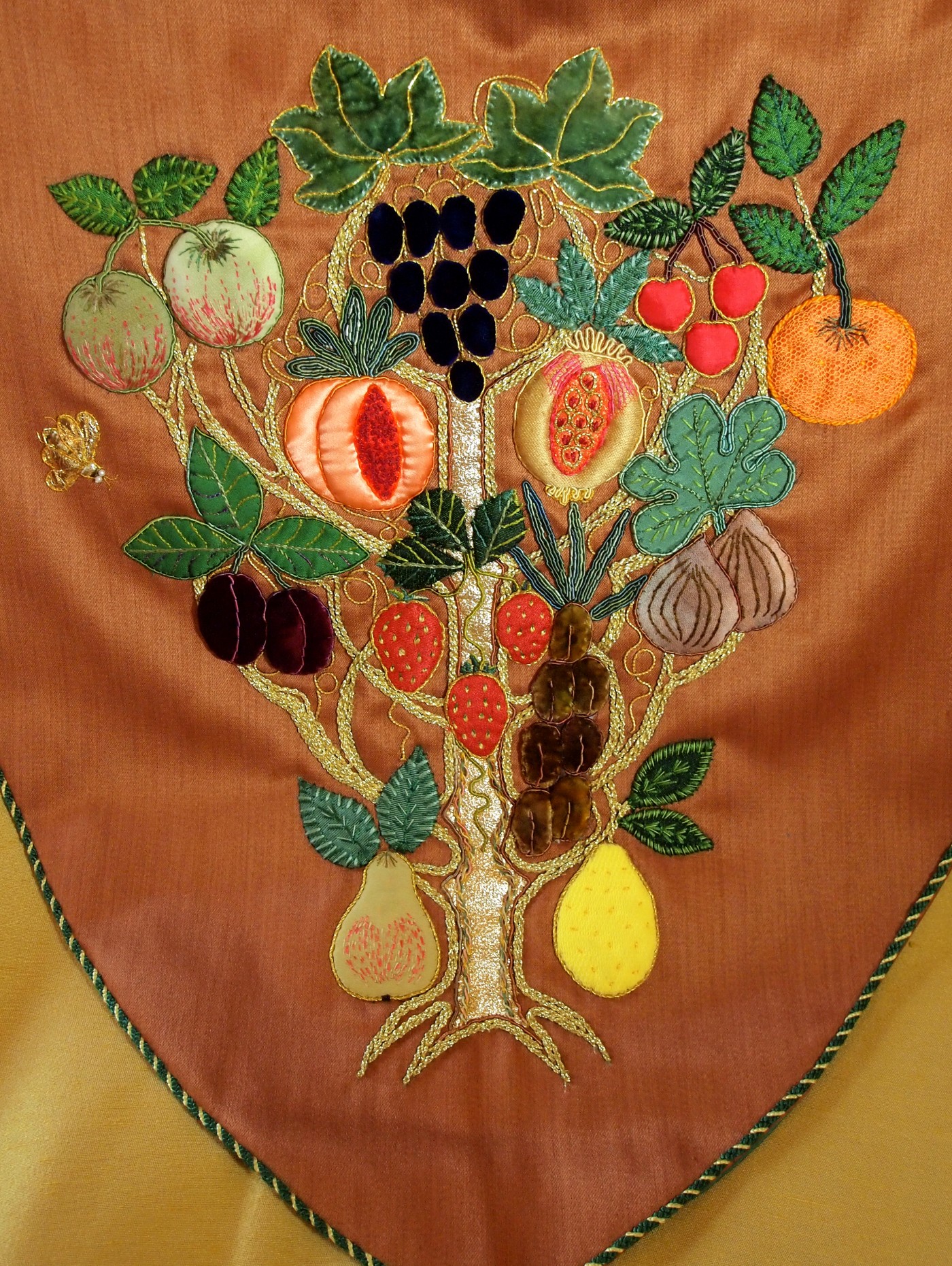 Detail of back of cope 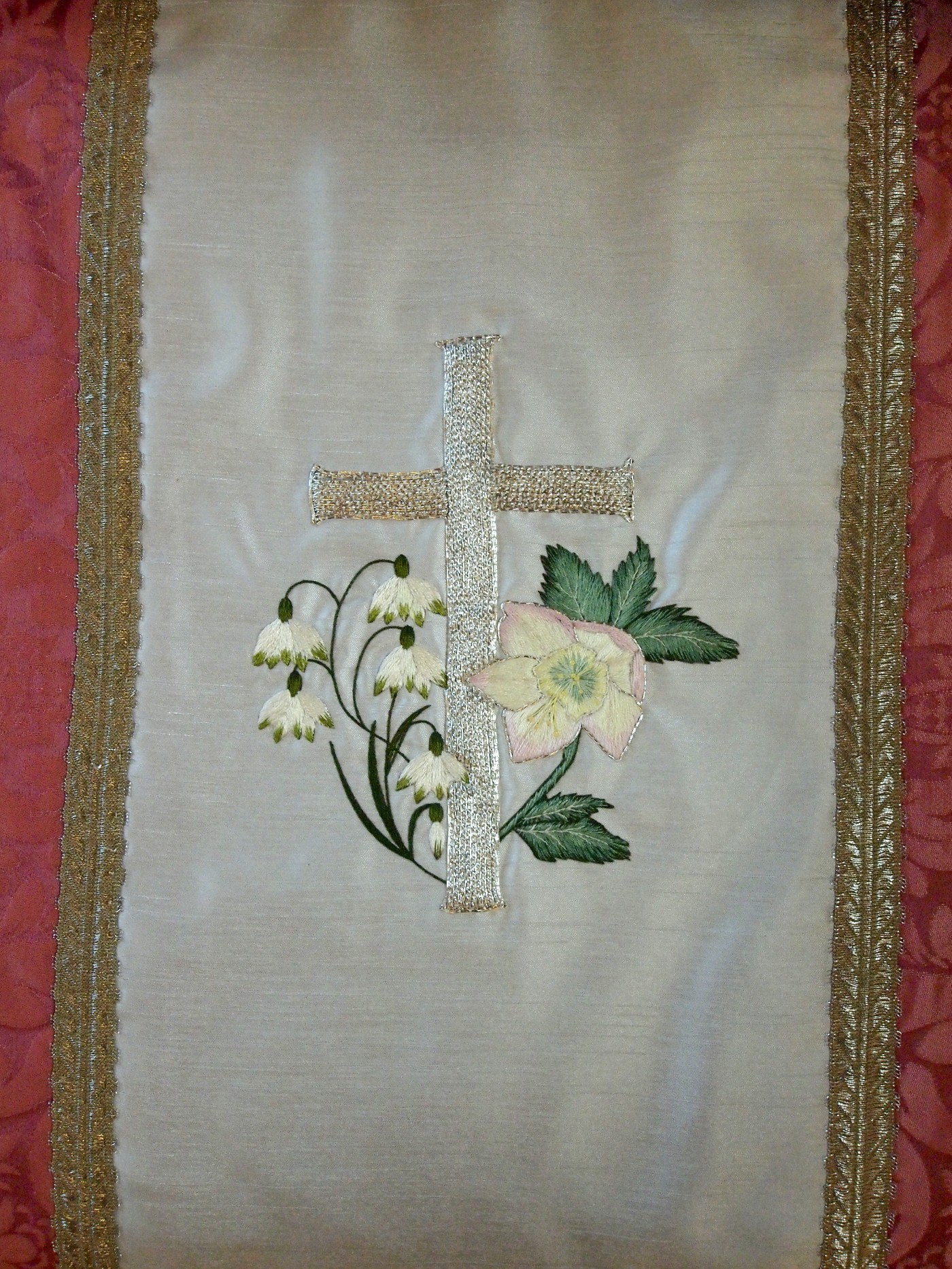 Work by Exeter Cathedral tapisers on a piece used at Advent