In September I was thrilled to visit the studio of Mr Steven Philip in Brighton. Describing himself as ‘a collector, hunter and gatherer’, the studio is Philip’s personal archive of vintage clothing accumulated over four decades. His archive is regularly plundered by stylists for editorial shoots, rented out for special occasions and used as inspiration by designers who travel to the south coast to rummage through the clothing rails which are crammed with alluring garments and standout exemplars from contemporary fashion history.

Philip is enthralled not only by extraordinary fashion design but also by the incredible stories behind the clothing that he collects and the people who wore and made them. His own story of how he got involved in fashion is equally fascinating. Leaving his hometown of Dundee in Scotland in the mid-1980s for the bright lights and possibilities of London he threw himself into the scene, excited by the clothes he encountered on the street and what the club kids were wearing.

He worked in Hyper Hyper, an emporium of streetwear designs and retro discoveries on Kensington High Street before setting up his own stalls in Portobello Market in 1991 to sell the collection of vintage clothing he had amassed. Specialising in Vivienne Westwood’s designs and platform boots from the 1970s, he found himself at the centre of the 1990s vintage revival, selling Kate Moss her first pair of Westwood pirate boots. In 1999 he established the vintage store Rellik on the Goldborne Road which he ran for 20 years before leaving London and launching his studio and consultancy. 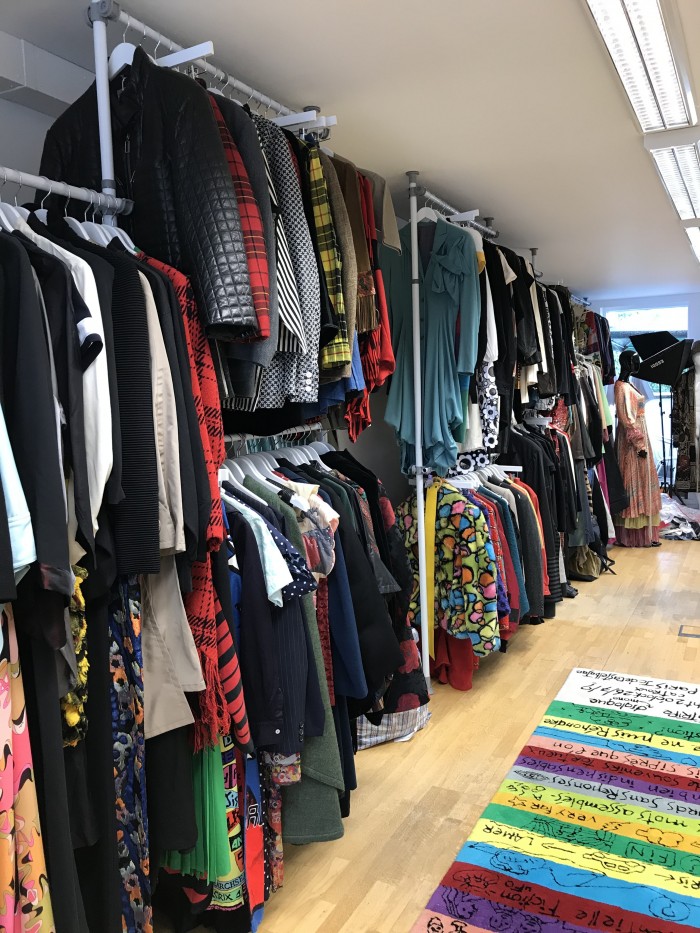 Philip’s studio holds a cornucopia of delights; he specialises in pieces by his fashion heroes including John Galliano, Vivienne Westwood, Alexander McQueen, Rei Kawakubo, and Yohji Yamamoto and in his collecting practice endeavours to put entire looks together. I was thrilled to handle a waistcoat from ‘Les Incroyables’, John Galliano’s legendary 1984 graduate collection. Philip explained that Galliano made the waistcoat from swatches of upholstery fabrics with old pennies as buttons as he could not afford to buy material as an impoverished student.

Philip is passionate about championing the designs and legacy of his fellow Scotsman, Bill Gibb, and pulled some of his impressive collection of Gibb’s earliest designs to show me. Gibb (1943-1988) began life in rural Aberdeenshire and showed a prodigious early talent for fashion design influenced by his love of medieval and Renaissance history. He moved to London to train and graduated from St Martins School of Art in 1966 before winning a scholarship for postgraduate study at the Royal College of Art.

In 1968 Gibb began his commercial design career working for the now defunct London-based label Baccarat. He produced voluminous pieces rich in texture using bold patterns including tartans, florals, and checkerboard in harmonious colours. 1970 was a monumental year for Gibb – he won both Vogue’s Designer of the Year and his pleated plaid skirt worn with a full-sleeved floral blouse and a knitted waistcoat designed for Baccarat was chosen as Dress of the Year by Beatrix Miller, the editor of Vogue for the Fashion Museum, Bath. This shoulder feature from a long sleeveless coat was designed for Baccarat’s Autumn/Winter 1971 collection and demonstrates Gibb’s exuberance and attention to detail. The coat is champagne coloured satin with a map print and is trimmed with a wide striped band and has top-stitched leather edging on the shoulder framing an embroidered flower. The coat was designed to be worn over a matching long-sleeved dress which unfortunately Philip has not gathered into his collection yet. Gibb left Baccarat to establish his eponymous label, launching his first Autumn/Winter collection at the Oriental Club in 1972. A Bill Gibb ‘room’ in Harrods and his own boutique in Bond Street soon followed. 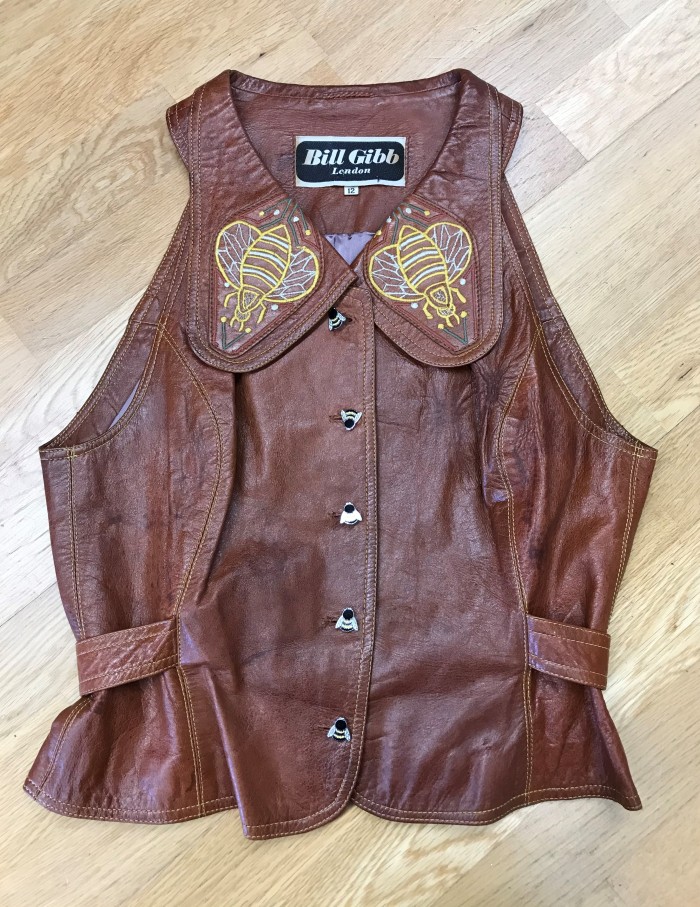 Being able to handle the garments allowed me to discover and appreciate all the exquisite details and excellent craftmanship. Gibb’s designs have been described as a ‘combination of craft, fantasy and couture standards of manufacture’[1]. Philip has some incredible chestnut leather pieces from Gibb’s first collection– this waistcoat has a half-belt, long rounded collar with Gibb’s signature motif, a bee (‘B’ for Bill) embroidered in yellow and appliquéd on, and five enamelled bee buttons. Gibb worked with artist Sally MacLauchlan on this leather skirt suit with bands of floral garlands and a graphic bee screen-printed in silver on the flared skirt and leg o’ mutton sleeved jacket which fastens with silver buttons in the shape of chrysanthemums. The V&A has this suit and a leather coat from the same collection and Aberdeen Art Gallery & Museums have a different style of leather suit with a full-length skirt.

This fox fur coat (image five), also dating to 1972, has a brown suede collar embroidered with the signature bees. Kate Moss wore this coat to the Louis Vuitton menswear show in Paris in January 2015. The coat is shown beside an ensemble comprising of a cream wool jacket, pleated swing-shape top with cross-over straps and a full-length pleated skirt with large-scale stylised chrysanthemum petals embroidered in brown and grey. This outfit is from Gibb’s 1930-s-inspired collection from A/W 1973 which shows Gibb’s versatility; the tailored, subdued looks demonstrate his understanding of ladylike chic and are yet more evidence of his delight in historical research.

Gibb’s romantic and bohemian looks were a hit with the stars of the day - he dressed Twiggy for the New York première of her film The Boyfriend, in 1971, designed an ivory wool dress and coat for the 1976 wedding of the singer Lulu to hairdresser John Frieda, and Bianca Jagger was photographed wearing a satin silk kimono coat in a print of peacocks, flowers and thistles designed by Gibb in 1977. Gibb’s fame peaked with his 1977 ten-year anniversary retrospective show held at the Royal Albert Hall and attended by 7000 people.

This shimmering printed lurex dress (image six), designed in 1973, is almost identical to a model that appeared on the runway at the anniversary show which was worn with a matching turban. It really does have it all going on – the full, pleated skirt is layered effect over pink and green skirts, the sleeves are ruched with bands of pink and end with fitted cuffs and embroidered hoops. Long silvery cords and knotted strands with beads and embroidered hoops hang from the waist over the skirt for more sparkle and movement.

I am very grateful to Steven Philip for his generosity in sharing his remarkable collection with me. I am more accustomed to the museum costume store, so I was delighted to encounter such beautiful garments that are still full of the potential to be reanimated and have fabulous adventures in the world outside the archive.

3. Detail of the shoulder of the map print sleeveless coat. Photo by author.

4. Detail of silver bee and floral garlands screenprint by Sally MacLauchlan on leather jacket from suit designed by Bill Gill label for his first solo collection A/W 1972. Photo by author.

3. Detail of the shoulder of the map print sleeveless coat. Photo by author. 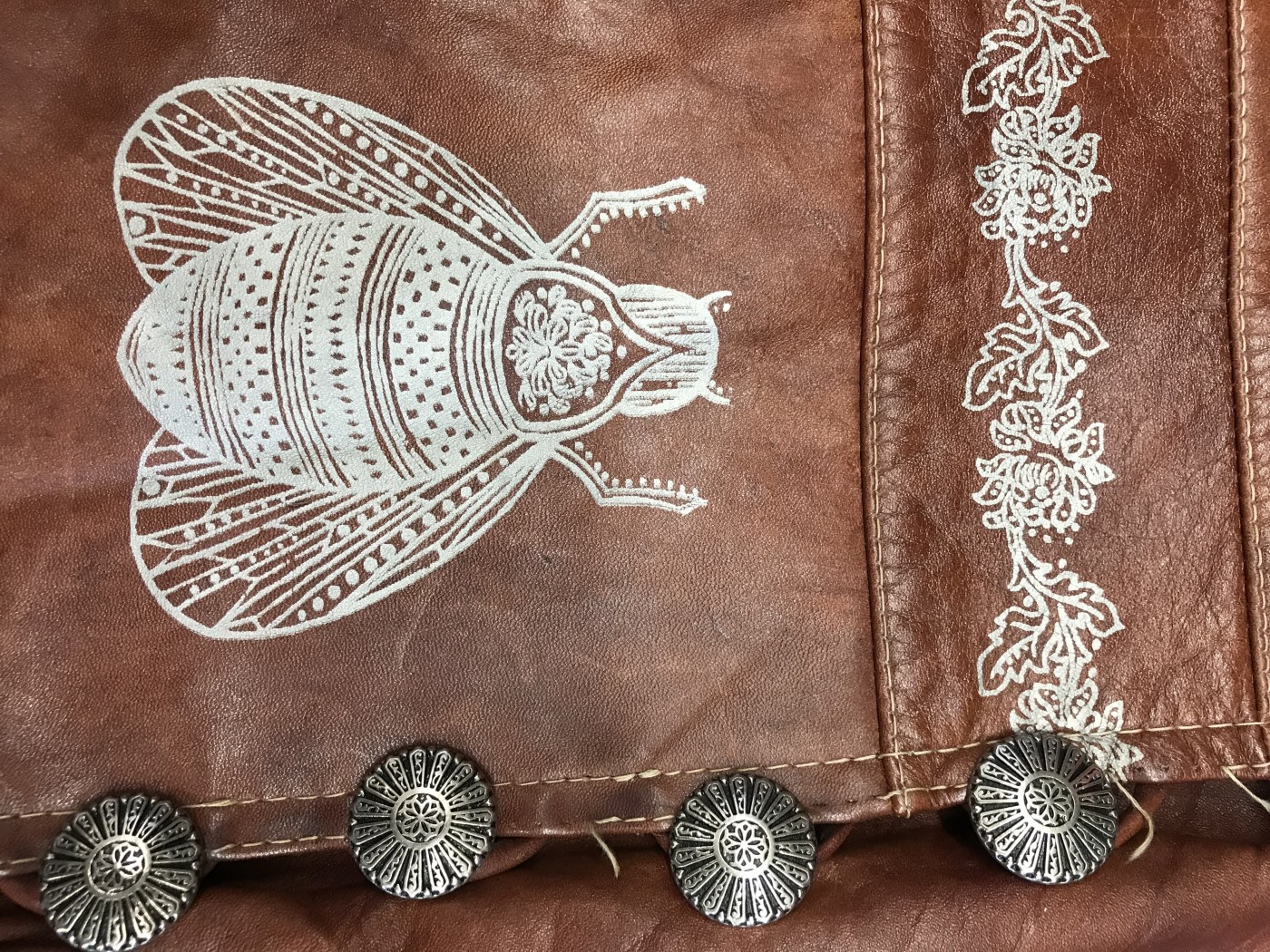 4. Detail of silver bee and floral garlands screenprint by Sally MacLauchlan on leather jacket from suit designed by Bill Gill label for his first solo collection A/W 1972. Photo by author. 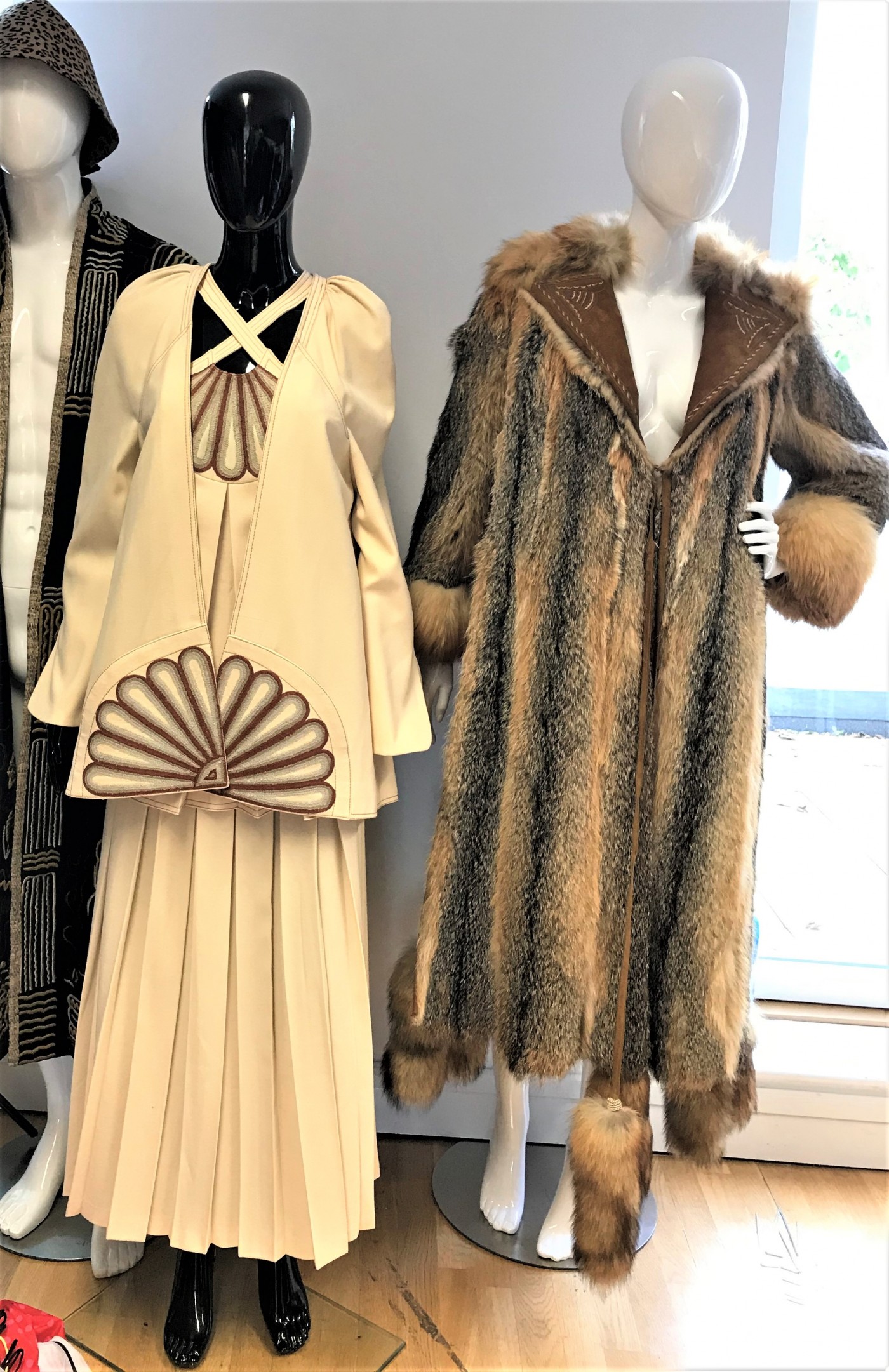 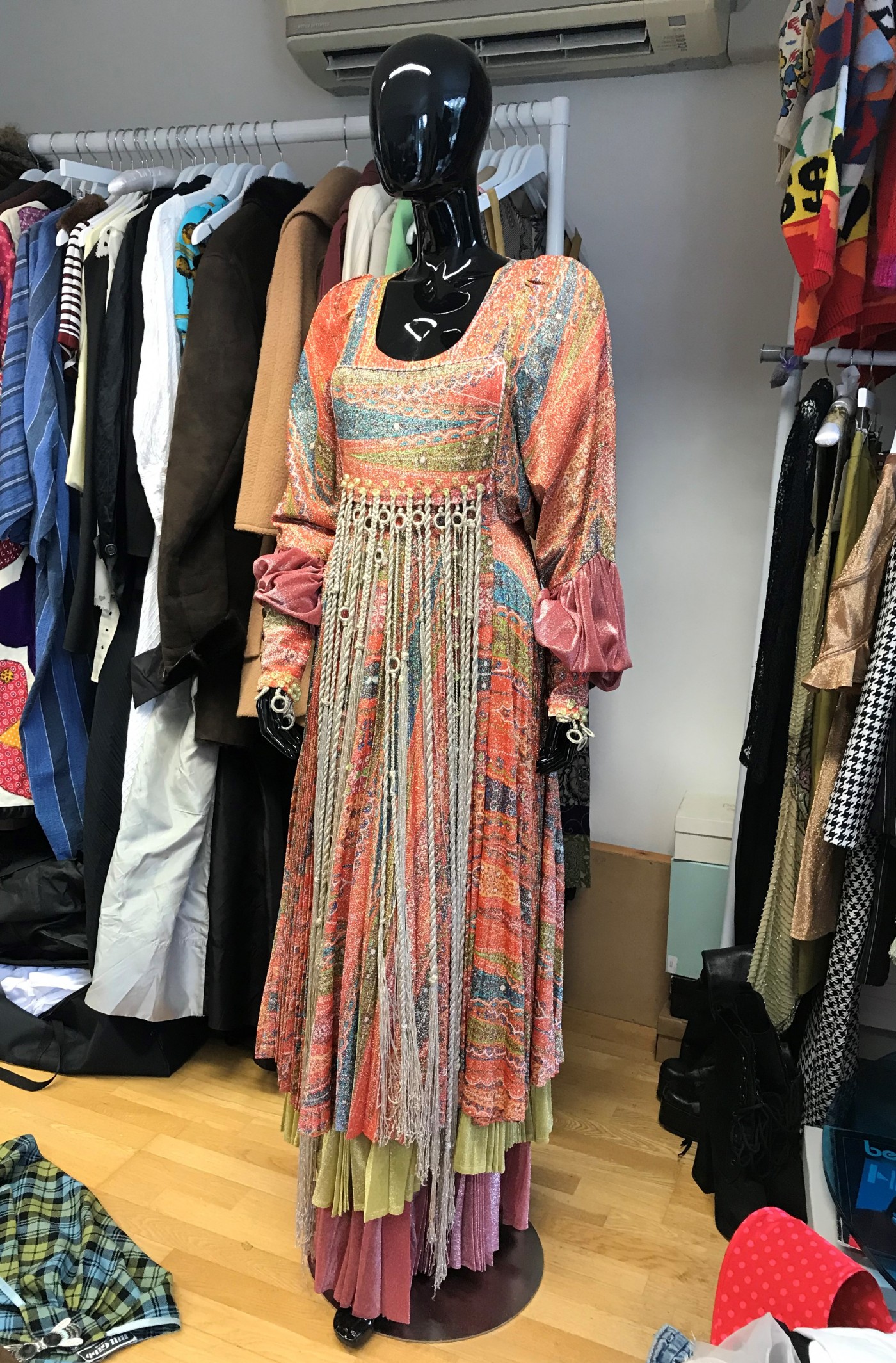 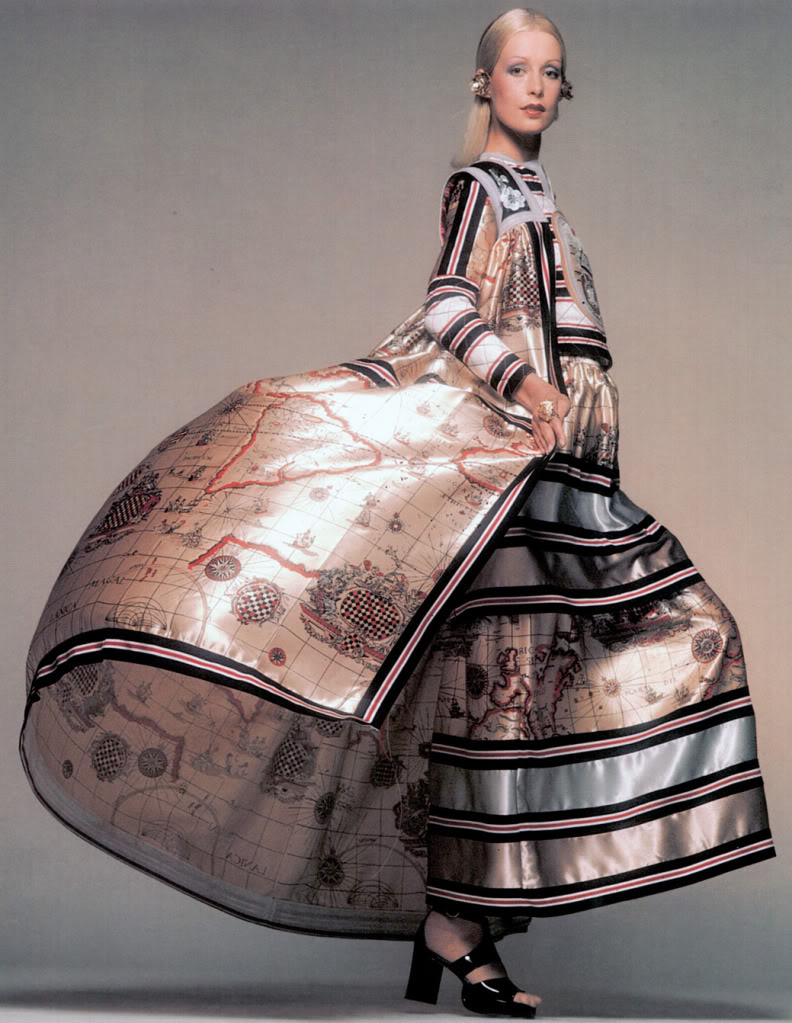