In this week’s blog post, we speak with Chris McKay, the menswear and military expert and reenactor Private Cannon. Based just outside of London, Ontario, Chris shares about his local re-enactment scene and what he wishes costume dramas would get right about the Regency era.

“I've been re-enacting for about 20 years, but I actually got into re-enacting a lot further back than that. My dad is a history enthusiast as I like to call myself as well, so we did a lot of a lot of family vacations to historic sites. When I was about 11 years old, we visited a recreated fort at Niagara Peninsula in Ontario where a surgeon showed me how he would cut off my leg if I was a soldier wounded in battle. I was hooked right away! I thought, I have to do this again. That was the spark right there.”

“That was my introduction to the War of 1812, which your UK friends would know as the Napoleonic Wars, the Peninsular War or the Regency era. I have done lots of different time periods, I have dabbled in the Seven Years War and 20th century, but I would say 1812 was my first love. I always come back to 1812 and the vast majority of my collection is all 1812.”

“There's something about the Beau Brummell style. You can see it as the beginning of the modern suit, and you can really trace style throughout the next 200 years. It's so modern, it's fascinating, but it's also so historic. The costumes are stunning, of course. My wife Shayna putting on a ball gown, it's just - how can you compete with that, right? The empire line - I just love the styles, the lines and the clothes.”

Chris attended his first re-enactment when he was 21 years old which was a small gathering outside of London, Ontario. “My wife to this day laughs that she thought she was going to be super authentic for the 19th century because she wore a pair of linen pants and she thought, look how great I'm doing. They're a natural fabric. She had her eyes opened to say the least! We enjoy 1812 re-enactments together and in the last decade we've got into more regency balls, dinners and dancing. So we ship the kids off and go spend the evening in the early 19th century.” 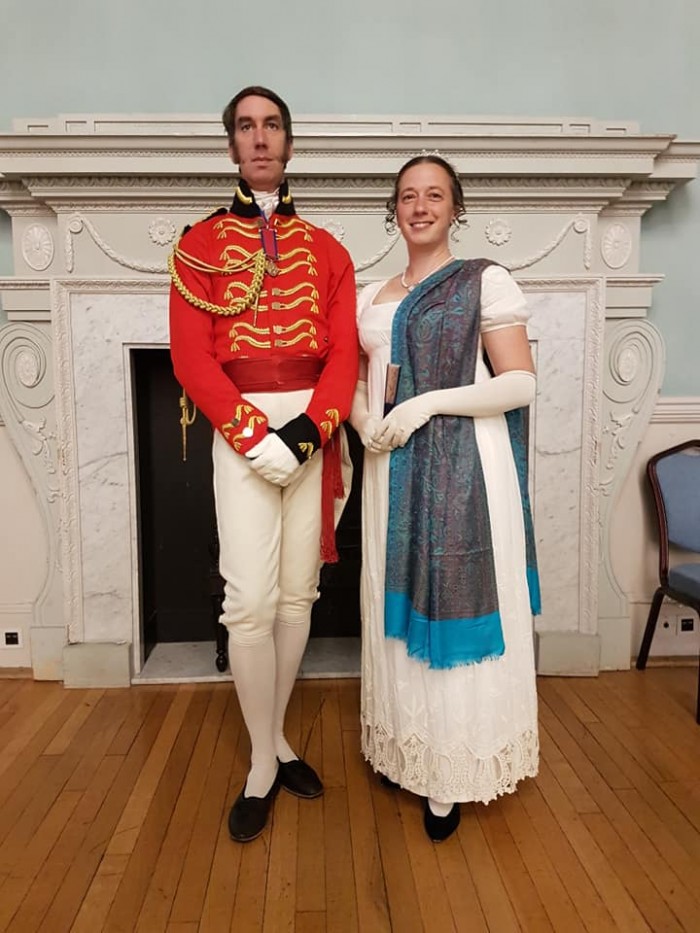 During a normal year Chris attends re-enactments throughout the summer period and their largest re-enactment to date was in 2012. “We did the 200th anniversary of the Battle of Queenston Heights, which a very important battle here in southwestern Ontario. And we had approximately 700 on the British side. But in a normal, really good re-enactment might have 300 redcoats. One of my most memorable re-enacting moments was in 2015 at Waterloo. We had approximately 200 Canadians in our group.”

But the last few years necessitated a shift to online, as Chris and his friend Tom Fournier started an online lecture series. “Enthusiasts from about thirty different countries have tuned in to our lecture series. But we are all itching to get back. The smell of the campfire doesn't really come through on Zoom.”

Chris has an extensive collection with dozens of waistcoats, ten pairs of trousers, pantaloons or breeches, and five more austere style of coats. “Of course, I have more private coats that I made for various regiments, so I've got four or five of those as well. We have a closet in the basement, and I was sort of joking with my wife that my garments take up 90% of the wardrobe now. And she’s got about six inches of the space for all of her dresses - it's not particularly equal anymore.”

Chris is an elementary school teacher and his military knowhow sometimes comes into the classroom in unexpected ways. “I've been in a few small documentaries as a background actor. Once I walked into the classroom where our French teacher was showing a documentary. ‘Oh, that's me!’ I said as I spotted myself, but they didn’t believe me!”

Re-enactment is a true family affair for Chris. “My youngest son attended his first major re-enactment at Queenston Heights 2012 when he was six months old. We have pictures of my wife holding him as a six-month-old on the battlefield of Queenston Heights. David, my 14-year-old is a drummer boy and he's learned the songs so well.” 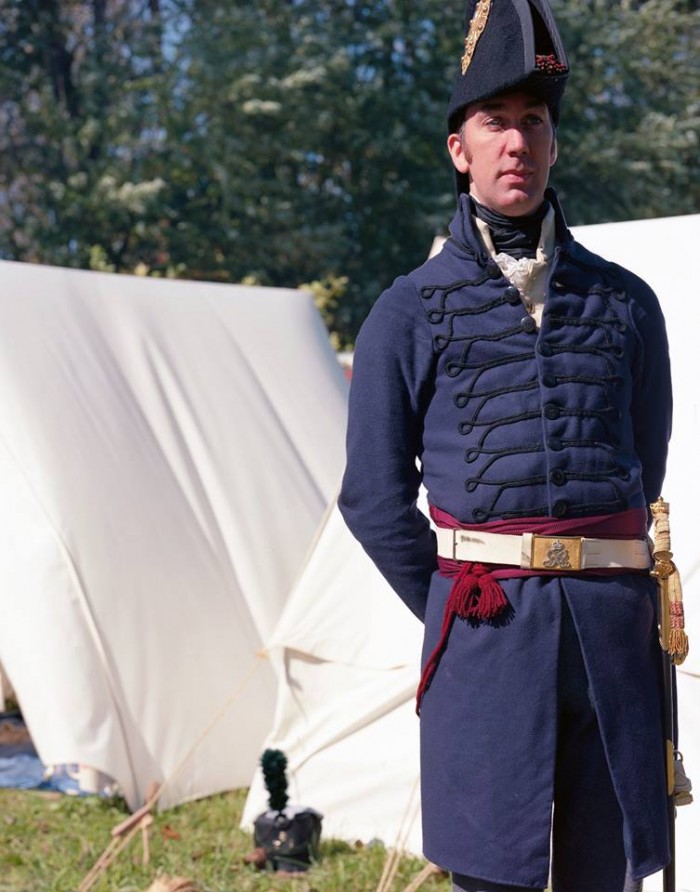 Chris portraying a Staff Officer in an undress frock coat

Chris surprisingly did not know about sewing or making patterns at all before starting… “on Friday nights I would get together with a friend and open some beers. He had sewing experience, so I would pin garments together and he would sew them together and then show me the next one to pin together. I just progressed from there, making little leaps and bounds. I would say to anybody who is getting into re-enactment that it's really all about trying to improve yourself. I still look at people, my wife’s work is still miles beyond me. I'm just trying to continually get a little bit better all the time and learn a new technique. As long as you're getting better than you were the day before, it doesn't matter. It's a very collaborative community, sharing patterns or being inspired and encouraged by each other as well.”

“I recommend following 18th century menswear on Facebook. It is an incredible collection of just brilliant minds. The tailors at Colonial Williamsburg have an incredible source of knowledge. There are lots of people that have their own private collections. Of course, I have to put in a plug for Zack Pinsent. Even just beyond his knowledge, he's an incredible person and super nice. I love seeing his pieces that he puts together.”

The re-enactment scene has changed quite a bit since Chris first started. “When I joined, it tended to be an older crowd just because of the expense. A musket can cost $800. In the last 20 years, I have noticed a lot more young people. We can loan you stuff so you don't have to worry about the cost to get to get going.”

If you follow Chris at Private Cannon on Twitter, you will know his popular wide-ranging commentary of military wear on screen. One of his favourites is a costume fan classic, the BBC’s adaptation of ‘Pride and Prejudice’. “I did point out lots of errors with the uniforms, for example they're supposed to be militia but they're actually wearing guards’ uniforms. But there are a lot of really good things in that show. For the most part, the uniforms are worn correctly and when they're in a ballroom scene, they'll be wearing breeches, whereas when they're outside, they'll be wearing boots, hats and capes. Also, the Duellists is brilliantly done and it's a brilliant example of what you can do without a huge budget.”

“The one that killed me was the film adaptation of Vanity Fair. There was no resemblance to uniforms at all. I've never really worked on a film set, but I've been there as a background actor, and I've seen the processes. I'm very nit-picky but if I could say one thing to directors - as a director, you're trying to balance the time of the day, the lighting, you've got a million things going on and somebody's just screaming you that the buttons are wrong. Who cares, right? But at the end of the day, if I could just say to directors, please don't forget that these are uniforms. People fought and died in them. We are all going to get things wrong, like to paraphrase Tom Hanks talking about Band of Brothers, on average they get 15% of things right and his goal was 20%.

We know that you can't recreate history. We know it can't be perfect, but at least respect the uniforms and respect the people who wore them. Don’t try to make it into a hokey costume. It is very easy to say, well it's just a costume. Well it wasn't to them. 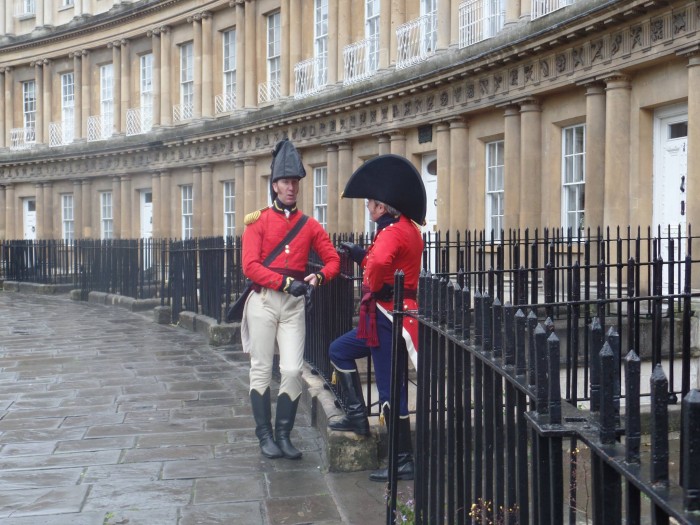 “I would also like more people to know that these uniforms are comfortable. A friend of mine just had a bespoke officer’s uniform made by Peter Twist who runs Historical Twist My friend said that the first time he put it on it fitted like a glove. If they're if they're done nicely, uniforms really are a pleasure to wear, like a well-cut suit today.

Finally, I wish more people would accept is that men's pants were tight. They're never tight enough. I mean, that's always an ongoing joke, right? I'm sure the viewers would love to see more of that.”

And on that note…

Budding 1812 re-enactors can join Chris in The Crown Forces of North America.

The Costume Society is a lively, friendly organisation whose aim is to promote the study and preservation of historic and contemporary dress. We are currently celebrating our year of menswear. If you would like to join us on our next menswear themed event, become a member today. 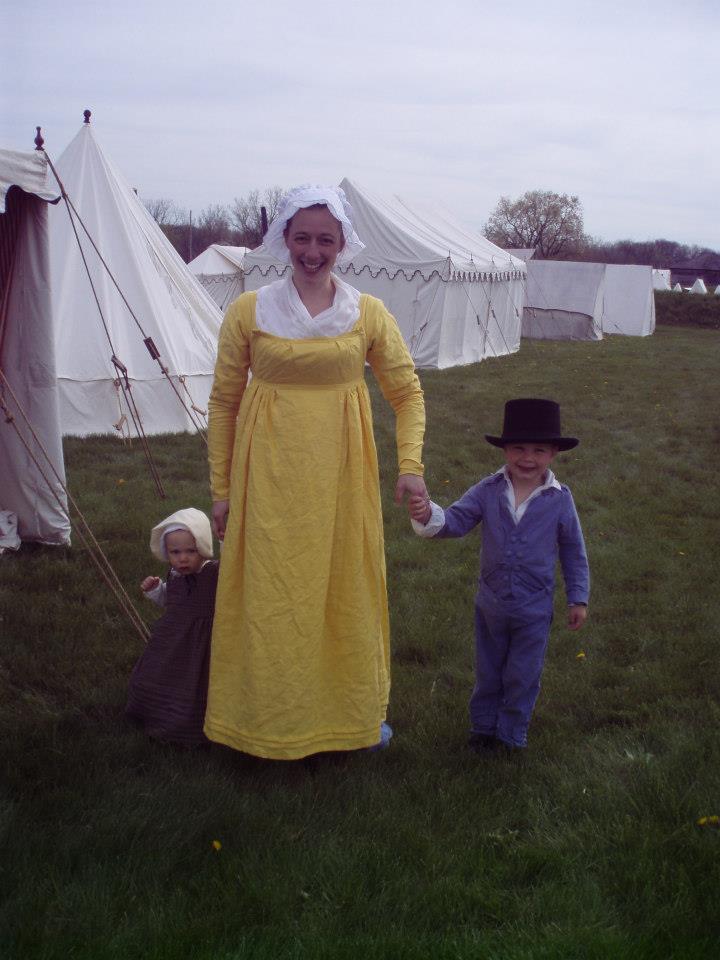 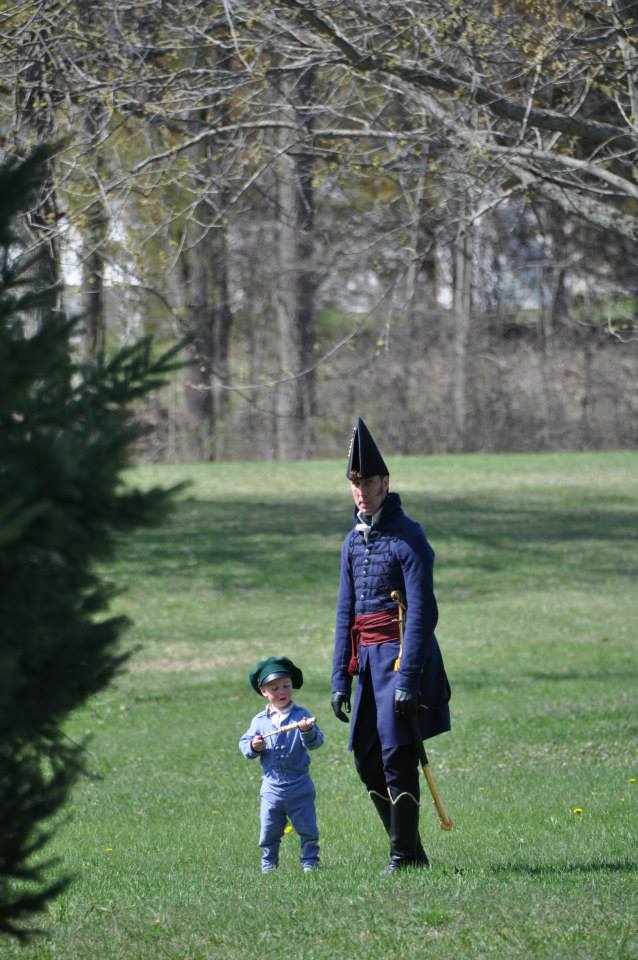 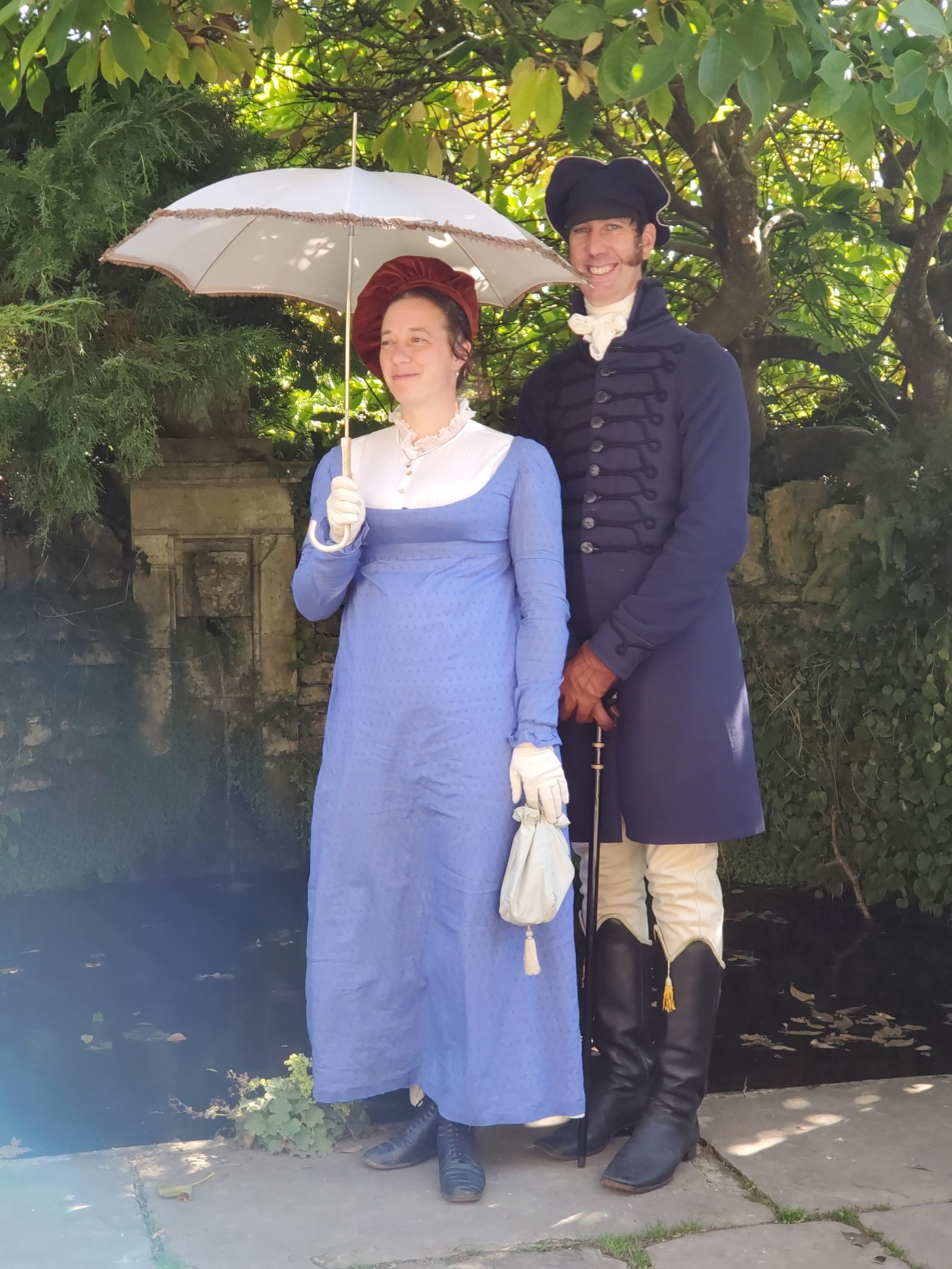 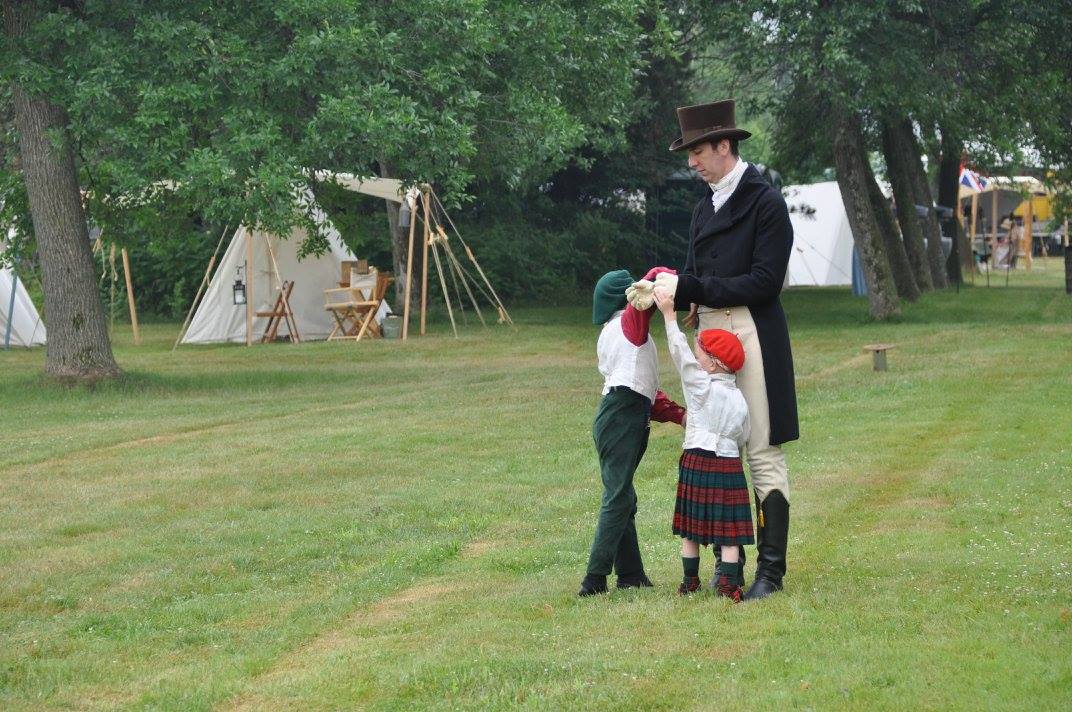