The Hennin Headdress: An Overview

In our latest blog, CS Ambassador Marella Alves dos Reis investigates the hennin, a cone-shaped headdress worn in the Middle Ages in Europe. 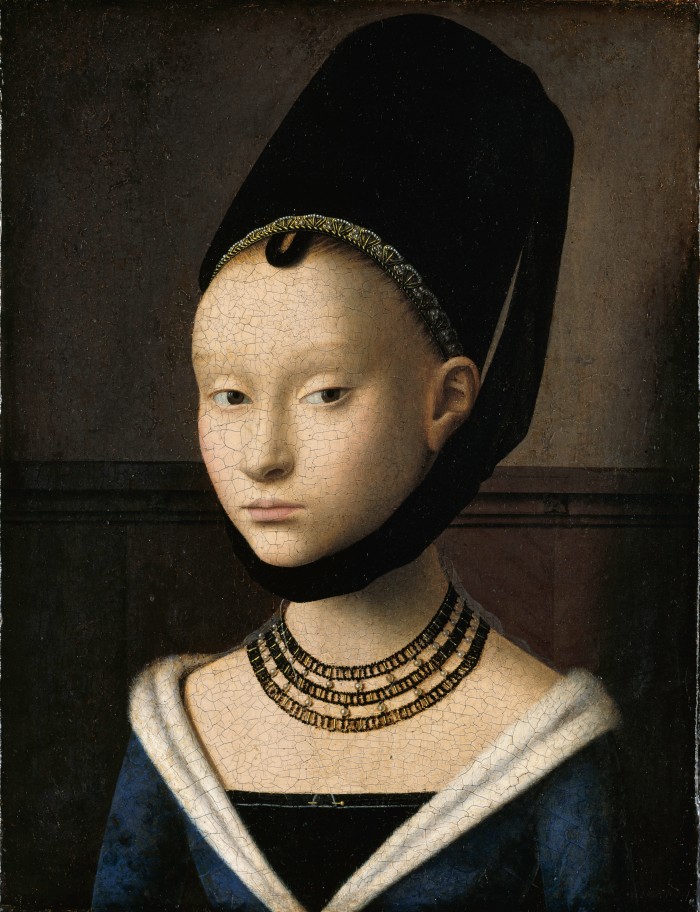 Hennin (or Henin) headwear is something that we will all have probably come across before in some historical setting, but might not have known its name. It is the tall conical headdress and veil worn by noblewomen of the late Middle Ages, which was worn at an angle at the back of the head [1]. It is a headdress often used in historical films to show that a woman is of noble birth, and is often worn by princesses. Moreover, the name is thought to come from the old French word ‘genhenner - modern French gêner, meaning to incommode or inconvenience, but this has not been proven, and could just be conjecture' [2]. The hennin originated in Burgundy and was, therefore, a Continental style [3], being worn mostly in Burgundy and France, as well as Northern Europe.

The hennin shares a common quality with other headdresses worn by women in the fifteenth century, insofar that they were all made with “incredible intricacy and ingenuity” [4]. Whilst width was the defining factor of headdresses worn in the early part of the fifteenth century, it was the height that primarily influenced the headdresses of the latter part of the century [5]. It was in this period that the hennin was popularised, and although there were a variety of tall headdresses around Europe during this time, it was the hennin that came to be the most emblematic of the period. Moreover, although the hennin evolved and developed in many different ways, one thing that remained and lingered through all the different variations was height - it had to be tall. Whilst its most popular period was the latter half of the fifteenth century, it was in existence before then, albeit as a much smaller and less colossal version.

However, around 1440, the hennin started to increase in height, and a much taller version became popularised, particularly amongst the noble ladies of France [6]. The height of the hennin also came to be an indicator of social status; the higher the hennin, the higher the rank of the woman who wore it [7]. This was exhibited in the sumptuary laws in Burgundy, which show how princesses were allowed to wear hennins which were over a yard in height, whereas most noblewomen were confined to heights of no more than 24 inches [8]. There is also evidence to show that some royal residences were altered to increase the height of doors so that members of the court could go between rooms without needing to stoop or remove their hennin [9]. Furthermore, it was so closely linked to nobility and wealth, that you had to have an income of more than £10 per year to be allowed to wear one [10]. The shape and structure of it also restricted it to the upper classes, as it was very impractical to wear, let alone to wear and work in.

The hennin had a variety of different incarnations. Although the tall Steeple Hennin, or Cornet, shaped like a candle extinguisher [11] was extremely popular, it was not the only style to be worn by women of the nobility. Another popular variation was the Butterfly Hennin, which had a ‘V’ shape at the back made by veils and supported by wires or canes [12]. As well as this, there was the Flowerpot Hennin, which was shaped like an upturned flower pot. It was quite similar to the Steeple Hennin, but instead of being tall and conical, it was truncated [13], so the pointed part of the cone was cut off. Another style to branch off from the hennin was the escoffion, which was eventually given its own name due to its popularity and stark distinctions from the original hennin. The escoffion had a “double-horn configuration” [14] which would then have gauze or silk draped over. It was a type of ‘reticulated headdress’, as it was bound with a network of golden thread or wire [15]. This, coupled with the two horn design, made the escoffion a very distinct and recognisable headdress.

Although the hennin had different variations and developments to its structure and composition, something that always remained was that it was only ever a headdress worn by the nobility, so much so that to this day it is still used in films to indicate that a woman is of royal birth. It was an incredibly impractical and extravagant piece of headwear, which ultimately most likely added to its popularity amongst the noblewomen of the late Middle Ages.