The Last Straw: The Extraordinary Masks and Costumes of Shetland’s ‘Skeklers’.

In this week's blog, CS Ambassador, Wendy Fraser, looks at masks of a different kind, examining the costumes and masks of the 'Skeklers' of the Shetland Islands.

Masks and face-coverings have never been more visible at this time, with the entire world currently connected by the wearing of the same article. Historically masks have been employed to allow the wearer to change identity, to be transformed and to embody another character or spirit. A recent article on The Scotsman newspaper website introduced me to the strange masks and costumes of the ‘Skeklers’ of the Shetland Islands, the group of 100 islands that lie in the North Sea between Scotland, Norway, and the Faroe Islands.[1] 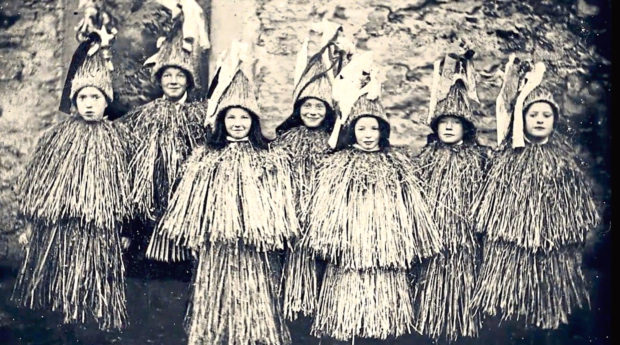 The menacing costumes worn by mummers were woven from oat straw, a plentiful material used for making ‘traditional straw baskets called “kishies”, thatching and for the straw backs of Fair Isle chairs’, as well as winter feed for animals.[2] The skekler’s costumes comprised of a tall conical hat in various forms worn either completely over the head as a mask or as a hat with an undyed muslin or cotton face-covering attached to disguise the wearer’s identity. The top of the hat was decorated with loops of straw, festooned with coloured ribbons and later with neckties. A straw skirt known as a ‘gloy’, and a short cloak was worn and the skekler carried a sheepskin bag called a ‘buggi’ to collect donations of food.

Skekling is distinct from the Scottish Halloween tradition of ‘guising’, a pagan festival held at Samhain (summer’s end) when it was believed liminal space opened between the worlds of the living and the dead, and spirits could walk the earth. Children dressed as ghouls could pass unnoticed amongst the spirits to perform songs or skits from house to house and be rewarded with treats to ward off bad luck. Skekling was also a pagan custom, performed for hundreds of years, and the mummers participated in an exchange ritual by being invited over the threshold and rewarded with treats. The practice was performed throughout winter to ‘bring the sun back from the grip of winter and ensure good crops’ at New Year, and wedding celebrations.[3] The leader, known as the ‘skudler’ led a group of skeklers, traditionally adults but latterly older children including a character known as the grølek from house to house, dancing around the fire until they were paid with ‘a coarn o’ meal, a penny o’ money or a bit of flesh’.[4] The experience must have been unnerving when seen by the light of the fire, as the skeklers hit the floor with wooden staves and were either eerily silent or tried to distort their voices to prevent recognition. One dramatic account from a tourist spectator in the 1850s describes the menacing scene; ‘the kitchen was full of beings, whose appearance, being so unearthly, shook the gravity of my muscles and forced a cold sweat to ooze from every pore in my body…’.[5]

The Scotsman article links skekling to the Shetland’s historical and cultural links to the Nordic Region. An old Faroese rural tradition involved an impoverished mummer, the ‘Grýla’ who painted their face black, wore seaweed as a long tail and on their head and ‘old clothes with seaweed hung from them, a belt, sheepskins, and rings made from fish stomachs around the wrists.’ This character also carried a bag to collect goods and made loud noises to frighten the children. [6] This practice is thought to have its roots in Catholicism and would happen the night before Lent began to warn children not to plead for meat.

Evidence about skekling is fragmentary, no photographs of actual skeklers remain, and the tradition is thought to have largely died out by the end of the 19th century. A 1909 photograph (figure 1), held by the Shetland Museum & Archives on Lerwick, shows seven children dressed as skeklers for a fancy-dress parade on Fetlar, Shetland’s fourth-largest island. The children wear their skeklers’ hats to show their faces which was undoubtedly in response to the photographic opportunity. This photograph inspired a project by the photographer Gemma Dagger who used reproduction costumes woven by the kishie-maker Ewen Balfour for a series of images shot on Fetlar. Her haunting black and white photographs echo the 1909 original and one unsettling picture features a woman dressed all in black with the skekler’s hat pulled over her face in a desolate landscape (figure 2 and figure  3) 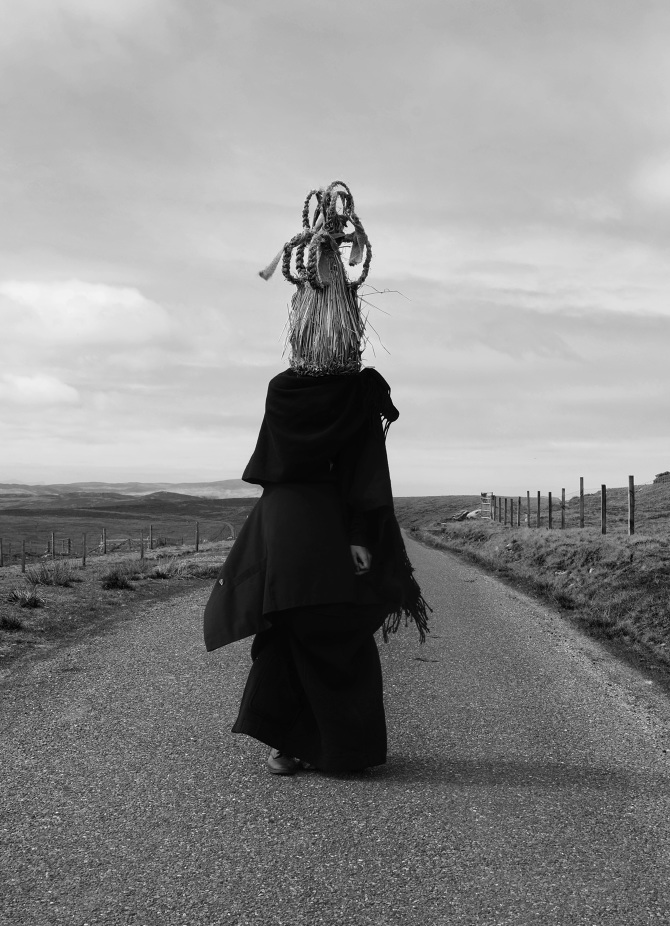 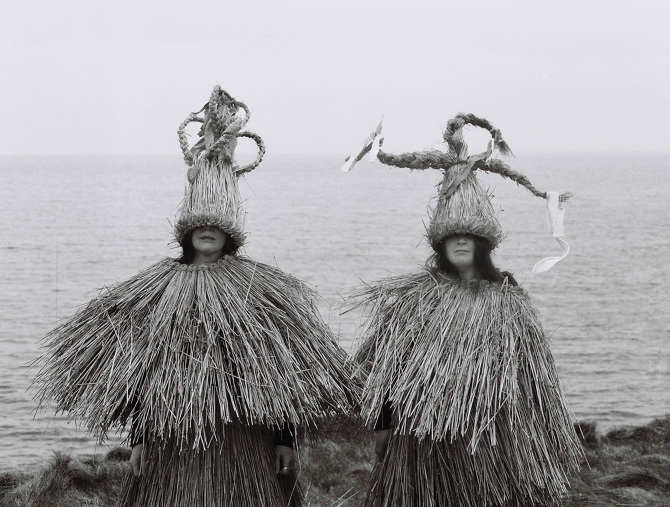 The practice of guisers, dressed in straw masks, conical hats, and costumes, masquerading at weddings and saints’ days was widespread in both Nordic and Celtic tradition, observed in Norway, Sweden and rural parts of West Ireland. The ‘Biddy Boys’ of South Kerry dress in straw to honour Saint Brigid on the 1st of February, her feast day while the masked ‘Wren Boys’ parade and play music on the 26th of December in a tradition for St Stephen, the Christian martyr. Writing on the Irish tradition Jim Ledwith describes the significance of masking ‘the mummer’s straw mask carries a metaphysical meaning, mystique and power that strikes against the world of routine, rules and civility’.[7]

In Cork, the masquerade tradition continues to this day with straw-clad men known as ‘The Straw Boys’. In an account from 1938, the writer describes the Straw Boys’ appearing at weddings intent on causing mischief liberated by the anonymity of the mask; ‘straw boys are known by different names in different places. They are called “puckerers” and “folpers”. They get plenty of drink at the weddings. (…) One of the straw boys dresses up like an old woman and there does be a captain with them. It is a custom for the old woman and the Captain to dance with the married people. They burn their hats when they are going home.’[8] Gráinne Quinlan’s photographic project ‘Strawboys’ celebrates the wedding mummers who she describes as ‘a colourful traditional curiosity’ in formal studio portraits in which they appear as bizarre relics from the past incongruous in the contemporary surroundings (figure 4 and figure 5). 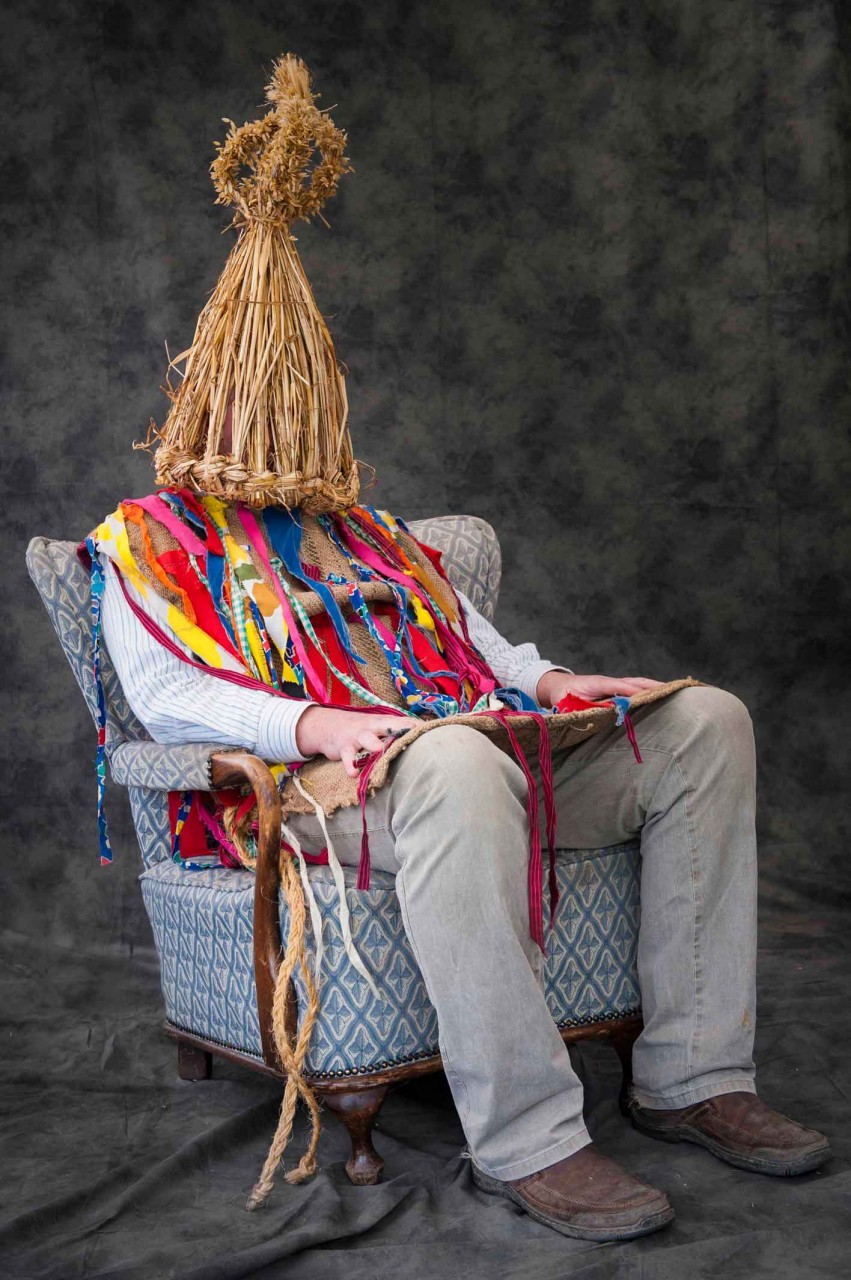 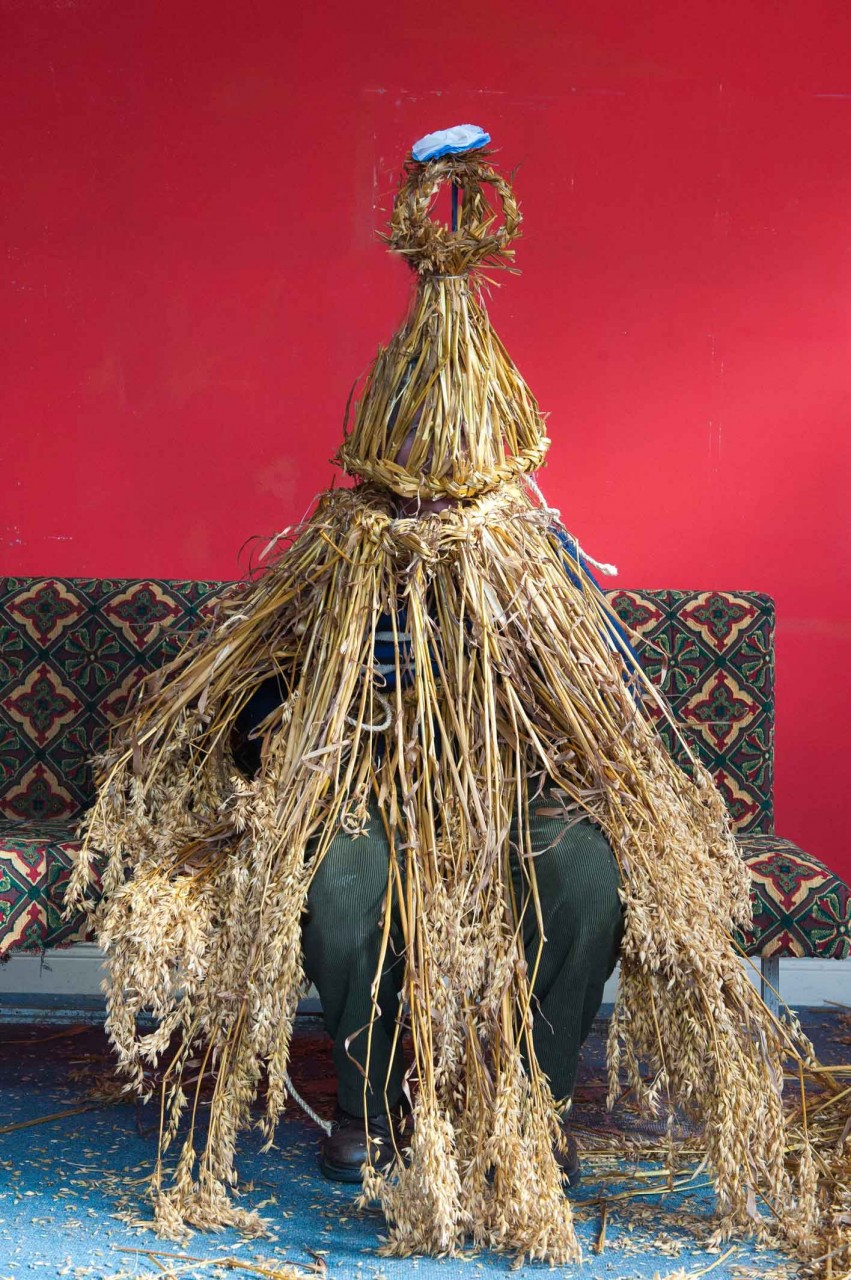 The origin of the wearing of masks, hats and costumes made from humble straw appears to be lost in time; the practice pre-dates Christianity yet has been adapted into the religious celebration of feast days in some rural areas. Straw-masked performers made merry and brought good luck and cheer to weddings yet were also tasked with embodying spirits that had to be cajoled to end the deprivations of winter. The craft of the costume in the pockets of mumming tradition that have endured to the present day are incredible artefacts of the cultures of ancient times.

4 Information received in an email to the author from Rannvá Winkler, Curator at National Museum Faroes Island.