In this week’s blog Costume Society ambassador Annika Gralke visits Hausvogteiplatz, Berlin and gives a personal account of reading Uwe Westphal’s Fashion Metropolis Berlin 1836-1939. The Story of the Rise and Destruction of the Jewish Fashion Industry. 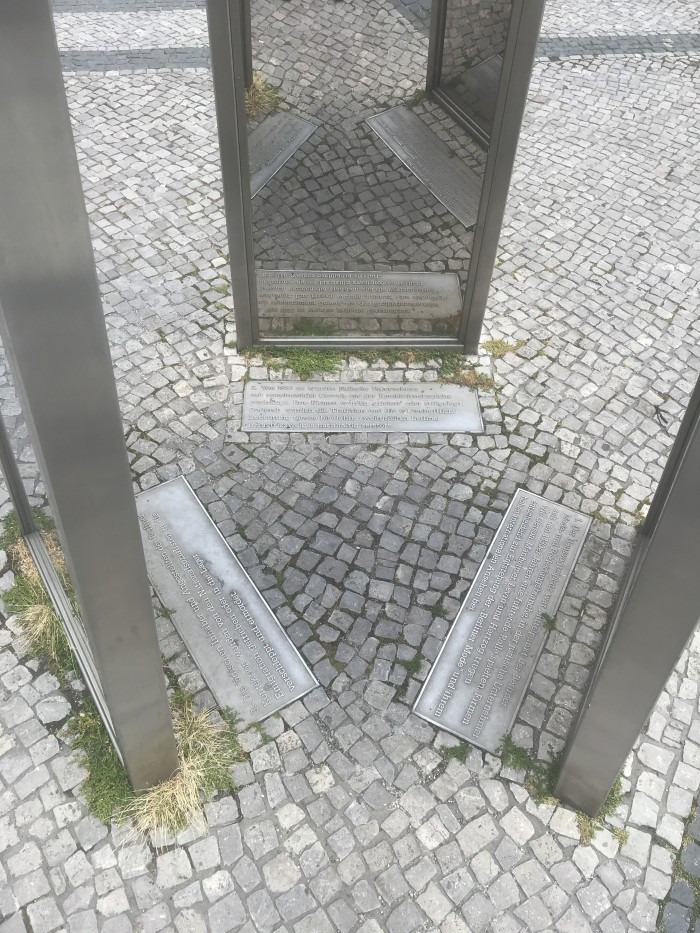 The monument on Hausvogteiplatz commemorating the persecution of Jewish clothing industry during the Nazi era. Created by artist Rainer Görß.

On an early Saturday morning in July I cycle to Hausvogteiplatz, Berlin. Surveying this small rather inconspicuous square - framed by multi-storey houses whose main floors are inhabited by cafés, bakeries and a single men’s clothier - It is hard to imagine that this was once an internationally renowned, centre for Berlin Fashion. Opposite the entry of the eponymously named subway station stands a memorial to the period of Hausvogteiplatz’s history known as the Berliner Konfektion – standardized ready-to-wear clothing – that originated here in the 19th century. The memorial consists of three dressing mirrors made from premium steel, arranged in a circle, and slightly tilted towards the centre. In the middle are three boards giving information on the fate of the Jewish manufactures and dressmakers who had contributed to the development of the area as an internationally recognised site of the Berlin fashion industry and who by 1939 had been boycotted and then completely eradicated by the National Socialists Nazi regime.

Sitting on a bench I take out a book by the German author and journalist Uwe Westphal, Fashion Metropolis Berlin 1836-1939: The Story of the Rise and Destruction of the Jewish Fashion Industry. Uwe Westphal has dedicated his career to the investigation of the Jewish fashion history of Hausvogteiplatz. Despite the challenges of those who were eager to keep this information under seal, through perseverant research, archive visits, and giving lectures in London, Jerusalem, Vienna, Poland, and the US, he was able to find witnesses (or their descendants) and documents to trace the history of Hausvogteiplatz. These accounts have provided the basis for various restitution payments claims by those affected. 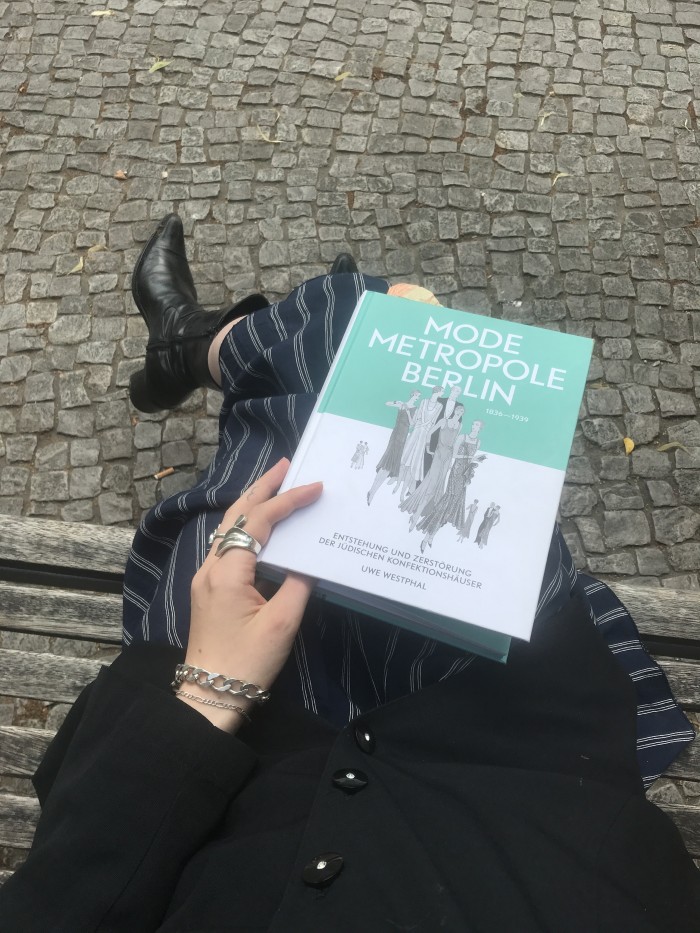 To trace the story of Hausvogteiplatz, it is helpful to go back further in history. In the 18th century, this was an area of authority, hosting the royal courthouse which included a detention centre for residents, court personnel – and Berlin Jews. A century later, however, it had developed into a residential and business area primarily for people of Jewish faith, many of whom had found refuge here from the antisemitic pogroms in Galicia (a historical, geographic region in Central/Eastern Europe) and Posen (today’s Poznań in Poland). Due to several rules and restrictions, Jewish immigrants were debarred from most professions except trade and retail, and many possessed excellent tailoring and textile skills. Changes in trading regulations around 1812 allowed for equal competition with the long-established artisan unions – most of them traditionally in Christian hands – which caused strain and tension between the respective members.

However, through competition and economic, societal, and industrial development, the industry succeeded in establishing a revolutionary system of garment manufacturing, known as Berliner Konfektion. Hermann Gerson, Rudolph Hertzog, David Leib Levin, Nathan Israel and the Manheimer brothers were among the pioneers of a new model of production the Berliner Konfektion, inspired by the Parisian haute couture, Berliner Konfektion made fashion accessible to the wider public by offering clothes “off the rack” using standardized measures and set prices.

By around 1860, the Hausvogteiplatz was home to 20 clothing manufacturing houses, ten years later the number had doubled. By 1875, Berliner Konfektion had become a success exporting to England, Sweden, Holland, Switzerland, and the US. With an approximate revenue of 5 million thaler, it formed an essential mainstay of the country’s economy. This was not least due to technical innovations and the rapid influx of people seeking work in the cities. Through an efficient organisation of independent (mostly male) sub-contractors – Zwischenmeister -, production was passed on to (mostly female) seamstresses working from home – and by 1896, roughly 155,000 seamstresses, were employed throughout Berlin. 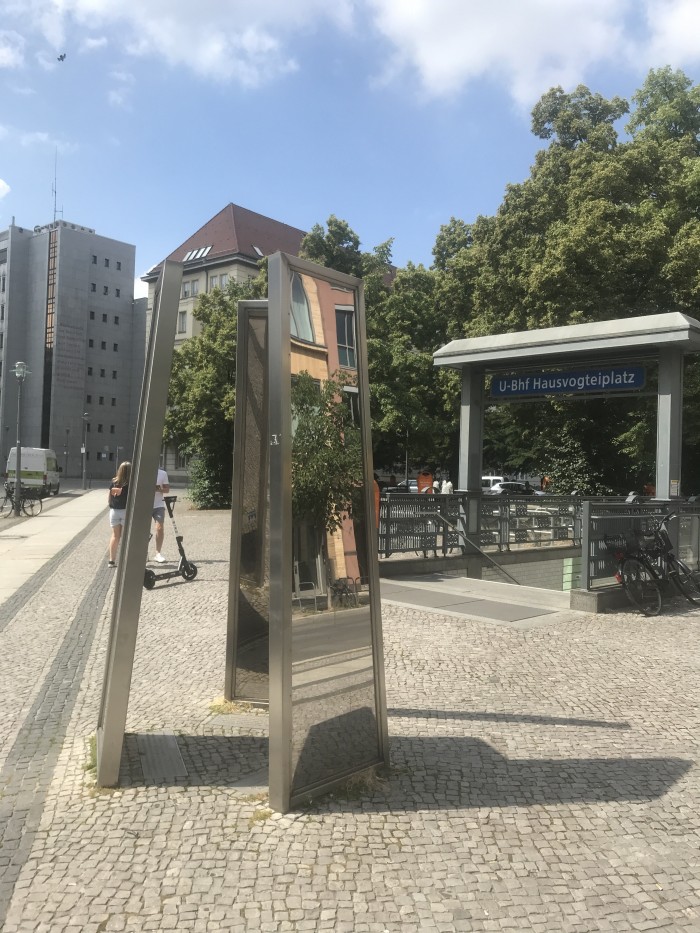 The monument on Hausvogteiplatz commemorating the persecution of Jewish clothing industry during the Nazi era. Created by artist Rainer Görß.

However, the downsides of the Industrial Revolution did not stop at Hausvogteiplatz. Sweatshop conditions and extremely low wages stood in stark contrast to the flamboyant silk and crinoline fashions only available to the upper class. Culturally rooted and growing anti-Semitism was directed at the Konfektion industry, however, it continued to expand and by the turn of the twentieth century, 500 out of 600 Germany-wide garment manufacturers were based in Berlin.

Following World War I through the Golden Twenties, Berlin constituted a cultural capital bursting of international artists and intellectuals attending cabarets, cinemas, theatres, nightclubs and this cultural shift was mirrored in fashion. The constricting corset fashion was abolished to support a new image of womanhood and a new appreciation of form and colour, sparked by the Bauhaus movement, inspired unprecedented innovations in fashion and textile design. The Berliner Konfektion burgeoned: by the mid-1920s, some 80.000 companies, half of them Jewish-owned, employed around 200.000 workers.

Despite its glamour, these years were also a time of political tension and a German quest for national identity, that fostered anti-Semite resentments and prejudices. The Wall Street crash of 1929 put an abrupt end to the roaring years, causing Germany’s economy (and democracy) to collapse, and ultimately aiding the National Socialists to seize power. From 1933, Jewish clothing manufacturers were exposed to boycotts, vandalism, humiliation, and dispossession. In the night of pogroms, not only books but sewing machines, drafts, fabrics, and business documents were burnt and the German word Konfektion was declared illegal. Within six years, 7.000 Jewish fashion houses, 2.700 of whom had been around Hausvogteiplatz, had been forced to close or “aryanized”. Some manufactures emigrated establishing new businesses outside of Germany. 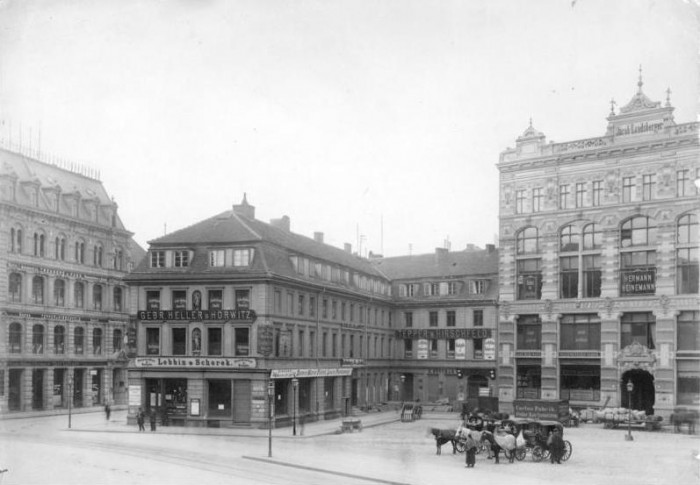 Those unfortunate to remain in Germany were taken to concentration camps where it is estimated that around 9,000 Jewish fashion industry workers members were murdered, and many more were forced to fabricate clothing. In Auschwitz Birkenau, as in other concentration camps, highly qualified seamstresses were compelled to produce “haute couture” from fabrics stolen by the Nazis, or from garments previously worn by those murdered in the camps. The clothes from the so-called “Salon Auschwitz” were sold at Hausvogteiplatz, in the dispossessed Jewish businesses. During this period, the eradication of competition and loyalty to the Nazi regime provided a unique opportunity for non-Jewish fashion designers; their names are listed in Westphal’s book.

The lost Jewish brands of Berlin, for example, Manheimer or Gerson, are now mostly unknown and we will shortly lose the last remaining witnesses of this period. Their names are listed and their histories meticulously narrated in Fashion Metropolis Berlin 1836-1939. The Story of the Rise and Destruction of the Jewish Fashion Industry may serve as commemoration and caveat (especially in a time where anti-Semite ressentiments are on the rise), but also as an impulse to reflect on contemporary fashion culture and praxis.

Annika is a trained fashion tailor, freelance costume designer, and, most currently, a student of Fashion Psychology at London College of Fashion.